On July 1, 2002, a 28-year-old male volunteer Captain (the victim)was struck by a motor vehicle while attending to a vehicle fire along an interstate highway. The victim was obtaining driver and vehicle information while standing near the incident scene when a passing northbound car was hit from behind by a pickup truck. The impact caused the vehicle to skid sideways, striking the victim and four others. The victim was life-flighted to a local hospital where he was pronounced dead. 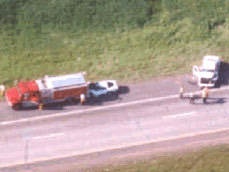 On July 1, 2002, a 28-year-old male volunteer Captain (the victim) was struck by a motor vehicle while attending to a vehicle fire along an interstate highway. On July 2, 2002, the U.S. Fire Administration (USFA) notified the National Institute for Occupational Safety and Health (NIOSH) of this fatality. On October 7, 2002, three safety and occupational health specialists from the NIOSH Fire Fighter Fatality Investigation and Prevention Program investigated the incident. The NIOSH team visited the incident scene and conducted interviews with the officers and fire fighters involved in the incident. They met with the Chief of the department and State patrol officers who were on the scene when the incident occurred. The NIOSH team examined copies of the State patrol accident reports, diagrams and drawings of the incident scene, dispatch run sheets, witness statements, and incident scene photos. The team reviewed copies of the department’s standard operating procedures (SOPs), training records of the victim, and the medical examiner’s report.

The volunteer fire department has 30 fire fighters and serves a population of approximately 4,400 in an area of about 43 square miles. The 28-year-old victim had been a volunteer fire fighter with this department for 3.5 years and served as Captain for 10 months. The State has no minimum training requirements for volunteer fire fighters, but the victim had approximately 270 hours of State and departmental fire and rescue training including NFPA Fire Fighter Levels I and II, First Responder, and specialized training regarding vehicle fires. There are no State-required, or department-mandated, training or standard operating procedures on traffic incident management.

Equipment
Only units and personnel that were dispatched for the initial vehicle fire and were on the scene at the time of the fatality are discussed.

Weather / Road Conditions
The incident occurred on a four-lane concrete interstate highway with an asphalt shoulder and grass median. The posted speed limit is 70 mph. According to the police report, traffic was estimated to be traveling at approximately 45 to 50 mph at the time of the incident. The highway is level and straight with a slight curve approximately 1/4 mile south of the incident scene. The weather was clear and the road was dry. Neither road conditions, topography, nor environmental conditions appeared to be a causal factor in this incident.

On July 1, 2002, at 0708 hours, Central Dispatch notified appropriate fire and police departments of a minor vehicle fire located on the right shoulder of the northbound interstate highway approximately 3 miles from the fire station. The driver of the incident vehicle (POV1) reported to Central Dispatch that the fire was out but still smoldering.

A fire fighter who was standing near the hood saw a vehicle skidding toward them and yelled “Look out!” According to the police report, a northbound passenger car (POV2) was traveling in the passing lane when it was hit from behind by a northbound pickup truck pulling a fifth-wheel camper. Following impact with the car, the pickup truck traveled across the grass median and into the southbound traffic lane before leaving the incident scene (Figure 1). After being hit by the truck, POV2 began skidding across the highway towards the shoulder where the emergency vehicles were parked. It hit the municipal police car and then struck the victim, two other fire fighters, the driver of the incident vehicle, and the municipal police officer. POV2 continued skidding at an angle, hitting POV1, which was propelled approximately 50 feet forward by the force of the impact and became lodged under the rear of E711 (Photo 2). POV2 came to a stop approximately 50 feet behind Engine 711.

The victim was found unresponsive and lying on the right shoulder of the highway just north of where POV2 came to a stop. The injured municipal police officer was unconscious and lying near the right rear tire of POV2. Two fire fighters and the owner of the incident vehicle were thrown onto the grassy area to the east of the right northbound shoulder (Figure 1). All three were conscious but had suffered various injuries. Two fire fighters jumped clear of the vehicles and escaped injury.

The State patrol officer, who had arrived immediately following the brush truck, observed the incident and radioed for assistance before exiting his vehicle to assess the scene and assist the injured. A rescue truck and emergency medical personnel were immediately dispatched from the victim’s fire department. Several ambulances and a medical evacuation helicopter were sent to the scene from nearby facilities. Injured parties were treated at the scene and transported to nearby hospitals by ambulance. Following advanced life-support efforts, the victim was life-flighted to a nearby hospital where he was later pronounced dead.

The Medical Examiner listed the cause of death as multiple blunt force trauma.

Recommendation #1: Fire departments should ensure that fire apparatus is positioned to protect firefighters from traffic. 1–5

Discussion: As stated in NFPA 1451 (8.1.4.1), “fire service vehicles shall be utilized as a shield from oncoming traffic wherever possible.” Placement of the first arriving fire apparatus should protect the scene by providing a work area protected from traffic approaching in at least one direction. If the apparatus is angled to create a block to the left or right it will create a physical barrier between the incident scene and approaching traffic. Responding emergency personnel should be kept within the shadow created by the blocking apparatus at all times. Positioning the fire apparatus at an angle to the rear of the roadway incident may have provided a work area that was protected from oncoming traffic.

Recommendation #2: Fire departments should establish pre-incident plans regarding traffic control for emergency service incidents and pre-incident agreements with law enforcement and other agencies such as the highway department. 4, 6, 7, 8

Discussion: According to NFPA 502, fire protection requirements for limited access highways include recommendations that “a designated authority shall carry out a complete and coordinated program of fire protection that shall include written preplanned emergency response procedures and standard operating procedures.” NFPA 1620 provides guidance to assist departments in establishing pre-incident plans. Pre-incident planning that includes agreements formed by a coalition of all involved parties such as mutual aid fire departments, EMS companies, police, and highway departments may save valuable time, present a coordinated response, and provide a safer emergency work zone.

Discussion: Fire fighters operating at the scene of a motor-vehicle incident on a highway are in danger of being struck by oncoming motor vehicles. Department standard operating procedures can help establish proper traffic control measures when operating at an incident scene. SOPs should include, but not be limited to, the following: apparatus positioning, lane closures, methods to establish a secure work area, clearing traffic lanes, releasing the incident scene back to normal operation, and wearing appropriate protective clothing at all times including the use of high-visibility reflective apparel when operating in or near moving traffic. As recommended in Protecting Emergency Responders on the Highways, “standard operating procedures (SOPs) should guide vehicle positioning upon arrival as an integral part of traffic control. Procedures should be scalable to incidents of varying size, magnitude, and location so as to be easily adapted to any sort of incident.”

Recommendation #4: Fire departments should ensure that personnel receive training in the proper procedures and the hazards associated with emergency operations for highway incidents. 1, 4, 7, 9

Discussion: Fire fighters who respond to highway incidents have numerous responsibilities ranging from traffic control to assisting injured or stranded motorists. Responders must be trained to safely conduct multiple tasks near moving traffic. Because of the variability of each incident, all emergency responders should have ongoing, appropriate, task-specific training. 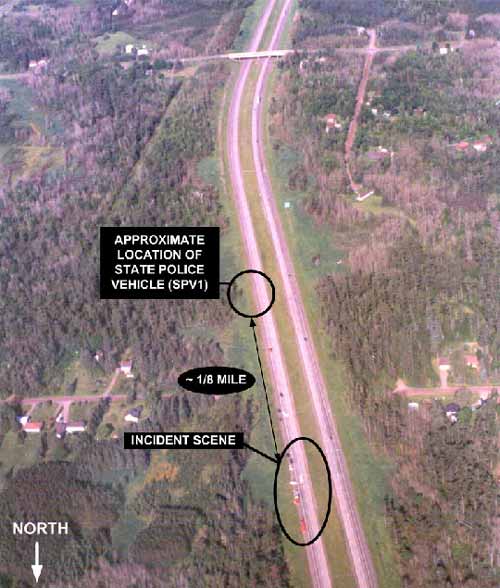 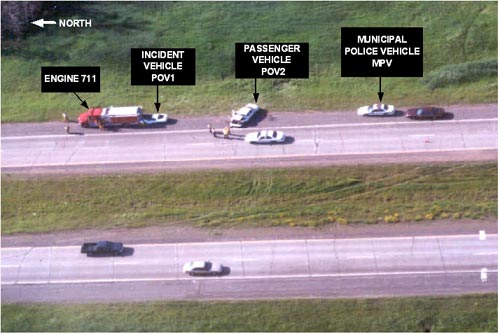