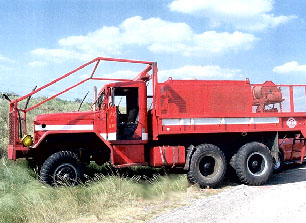 On August 12, 2002, a 28-year-old male volunteer fire fighter (the victim) was fatally injured when he was ejected from a work platform on the front of a moving brush truck and was run over by the brush truck. On August 14, 2002, the U.S. Fire Administration (USFA) notified the National Institute for Occupational Safety and Health (NIOSH) of this fatality. On September 30, 2002, the Chief of the Trauma Investigations Section and a Safety and Occupational Health Specialist from the NIOSH Fire Fighter Fatality Investigation and Prevention Program, Division of Safety Research, investigated the incident. The NIOSH team met with the Chief of the department, visited the site of the crash and took photographs and measurements, and interviewed fire fighters who were directly involved with the incident. The brush truck was viewed and photographed, and measurements were taken. The NIOSH team also reviewed the department’s standard operating procedures (SOPs), witness statements, the State fire marshal’s report, traffic report, and the medical examiner’s report.

Road/Weather Conditions
The incident occurred on a rural asphalt road without a shoulder. The road is approximately 18 feet wide with no center line and a posted speed limit of 55 miles per hour. According to the National Weather Service report on the day of the incident, the weather was clear and sunny, the temperature was 95 degrees, and the wind was blowing 22-25 miles per hour southeast to northwest.

Equipment
The brush truck is a 1974 diesel 5-ton converted 6-wheel drive military cargo truck with manual transmission and a drum braking system. The truck has a square 900-gallon water tank with four baffles and is equipped with piping to a short hose line. The tank, manufactured in 2000, was 95-100% full. The overall vehicle length is 257 inches, vehicle width is 96 inches, and the wheelbase is 85 inches.

The working platform was built by the fire department onto the front bumper of the brush truck and extended out approximately 36 inches. The platform had an open frame that extended up to the cab and then down the sides of the bumper. The lower front portion of the frame was mesh wire, which extended 39 inches from the top of the bumper to the cross member. The rest of the frame was open allowing uninhibited access from either side (Photo 1).

On August 12, 2002, at 1617 hours, the volunteer fire department was dispatched to a confirmed residential grass fire. Between the hours of 1626 and 1634 hours, the following personnel arrived in this order:

The Assistant Fire Chief was first on the scene at 1626 hours and assumed incident command (IC). The IC called for traffic control and sized up the area of fire origin on the residential property. The fire was noted to have started in a pasture near a manure pile between the State road and the rural road (Diagram). The fire was spread approximately 300 feet long and was burning near the fence line, threatening to cross the rural road.

Crews with the two engines were attacking the fire from the State road on the south side where smoke had become thick and was blowing across the roadway, diminishing visibility. The deputy sheriff arrived on the scene for traffic control at the west end of the rural road (Diagram). Traffic control for the east end was en route at the time of the incident. The brush truck made a pass at the fire with a charged hose line from west to east and then turned north, making a U-turn across the roadway, presumably to make another pass to extinguish the fire near the fence line. A witness stated that he saw the driver of the brush truck reach the end of the fire line and make a U-turn across the roadway where the truck came almost to a halt. A pickup truck traveling in the westbound lane at approximately 30-40 miles per hour (according to the traffic report) passed through the heavy smoke toward the brush truck, skidded 56 feet, and impacted the right front tire of the truck (Diagram). Note: According to the state fire marshal’s report, the driver of the brush truck was not wearing a seat belt, and upon impact, was thrown across the interior, losing control of the vehicle. The impact caused the victim to be ejected from the work platform to the ground directly in front of the rotating front left tire of the brush truck.

According to the death certificate, the cause of death was “craniofacial crush injuries due to a fall from moving vehicle with a secondary run-over.”

Recommendation #1: Fire departments should ensure that fire fighters attack a brush fire from a safe place on the apparatus or walk alongside the moving apparatus. 1, 2, 3, 4

Discussion: In this case, the victim was holding a charged hoseline and attacking the fire from the front-bumper-mounted working platform on the brush truck. There was a 39-inch metal guardrail open-sided at both ends. The platform was mounted on the front bumper, which is where the victim was working while the brush truck was moving. According to the International Fire Service Training Association (IFSTA), there are two proper methods for making a moving fire attack: “The first method is to have fire fighters use a short section of hose and walk alongside the apparatus and extinguish the fire as they go.” The NFPA 1500 Standard for the Fire Department Occupational Safety and Health Program concurs with this recommendation. Further, this standard strongly recommends that “two fire fighters, each with a hoseline, walk ahead and beside of the vehicle’s path, both fire fighters on the same side of the uninvolved terrain. This allows the fire fighters to operate in an unhurried manner, with a clear view of fire conditions and the success of the extinguishment.”

The second IFSTA recommendation is to use nozzles that are remotely controlled from the inside of the cab. The practice of fire fighters riding on the outside of vehicles and fighting wildland fires from unprotected positions is not recommended by NFPA Standards.

Recommendation #2: Fire departments should ensure that adequate traffic control is in place before turning their attention to the emergency. 4, 6, 7

Discussion: The Incident Commander sized up the grass fire area and called for traffic control for both the east and west entrances to the rural road. The deputy sheriff was blocking the west entrance, and traffic control was en route to the east entrance when the incident occurred. According to Dunn, “When a fire company arrives on the scene of a roadway emergency and there are no police at hand to control traffic, fire fighters themselves should first control the oncoming vehicles before safely turning their attention to the emergency. It is recommended that warning signal devices such as flares, flags, road blocks, or road signs be placed at a minimum of 350 feet from the incident scene (further distance may be required taking into account line of sight, visibility, road and weather conditions) and positioned so they are visible to oncoming traffic for at least 350 feet beyond that. This placement allows the driver a minimum of 700 feet in which to stop a vehicle”.

Fire fighters make many life and death decisions during a tour of duty, and one of the most important is snapping on a seat belt after climbing aboard an emergency apparatus that is called to respond. As stated in NFPA 1500, “All persons riding in or on fire service vehicles should be seated in approved riding positions and should be secured to the vehicle by seat belts whenever the vehicle is in motion. Riding on tail steps, running boards, side steps, or in any other exposed position should be prohibited.” The fire department in this incident did have a written safety policy on the use of seat belts at the time of the incident; however, no enforcement policy was utilized. The department also has an SOP that specifies that members obey all traffic laws while responding to any call. Texas has a mandatory seat belt law. 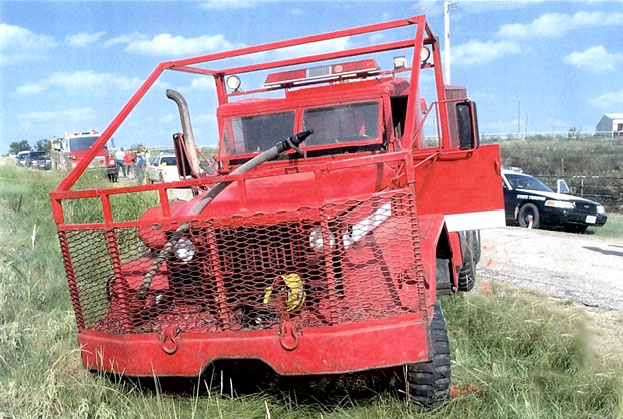