On June 8, 2002, a 26-year-old male career fire fighter (the victim) died and another career fire fighter was injured when they were struck by a tractor-trailer while they were assisting at the scene of a traffic incident. Both the victim and the injured fire fighter were off-duty, and they had stopped to aid a motorist who was trapped in an overturned vehicle in the median of a highway. Several other passersby, including a physician, an emergency medical technician (EMT) and two other civilians, had also stopped to aid the trapped motorist. Heavy rain was falling, and within minutes a tractor-trailer swerved into the median to avoid traffic, striking all of the rescuers. The victim and the physician were pronounced dead at the scene, and the other fire fighter suffered a broken leg. 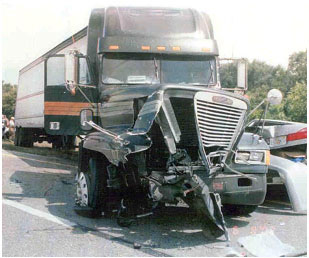 On June 8, 2002, a 26-year-old career male fire fighter (the victim) died and another career fire fighter was injured when they were struck by a tractor-trailer while assisting at the scene of a traffic incident. Both the victim and the injured fire fighter were off-duty, and they had stopped to aid a motorist who was trapped in an overturned vehicle in the median of a highway.

The National Institute for Occupational Safety and Health (NIOSH) was notified of this incident on August 30, 2002, by the United States Fire Administration. On September 9, 2002, three Safety and Occupational Health Specialists from the NIOSH Fire Fighter Fatality Investigation and Prevention Program investigated the incident. The NIOSH team met with the Chief and Division Chief of the victim’s department. A telephone interview was conducted with the other off-duty fire fighter who was injured in the incident. The State police report, the fire department incident report, the ambulance call sheet, the training records of the deceased, and the coroner’s report were reviewed.

Fire Department
The victim was employed by a career fire department that has 3 fire stations and serves a population of almost 30,000 in a geographic area of 15 square miles. The department is staffed with a total of 51 personnel, with 50 being uniformed fire fighters. The department responds to over 3,200 calls per year and is also responsible for emergency management.

Off-Duty Response Policies
During this incident the victim was off-duty, but it is the department’s policy for their fire fighters to stop and render aid in the case of an emergency. The State of Florida has a Statewide Mutual Aid Agreement, with signatories from all counties and municipalities, allowing fire fighters to respond to emergency situations they encounter. In addition, the Florida Legislature has recognized that fire fighters occasionally render aid outside of their normal jurisdictions and have enacted statutes for their protection. Florida Statute 440.091(2) states “If a firefighter is engaged in extinguishing a fire, or protecting and saving life or property due to a fire in this state in an emergency, and such activities would be considered to be within the course of his or her employment as a firefighter and covered by the employer’s workers’ compensation coverage except for the fact that the firefighter was off duty or that the location of the fire was outside the employer’s jurisdiction or area of responsibility, such activities are considered to be within the course of employment.”

Training
The 26-year-old victim had been a fire fighter with the department for over 3 years and had completed NFPA Fire Fighter Levels I and II training.

Equipment and Personnel
The victim responded in his privately owned vehicle (POV), wearing blue jeans, a gray shirt with fire department insignia, and boots. The injured fire fighter also responded to the scene in his POV wearing street clothes.

Road and Weather Conditions
The incident occurred in the grass median on an interstate turnpike (Photo 1). The weather was overcast with heavy rain falling. The temperature was 80° F. The highway was level and straight with a center sloping grass median. The road surface was comprised of asphalt with a paved shoulder. The median separates dual north and southbound lanes that are marked with perimeter fog lines and rumble strips. Each lane is approximately 20 feet wide and the median is approximately 30 feet wide. The road has a posted speed limit of 70 mph.

On June 8, 2002, at 1315 hours, a pickup truck overturned during heavy rain into the median strip of a four-lane Florida turnpike. The victim was one of six passersby who stopped to aid the motorist trapped in the pickup truck before emergency services arrived. The rescuers included the victim and injured fire fighter, a physician, an EMT, and two civilians. The rescuers were attempting to free the trapped occupant and administer patient care. (Note: Traffic controls had not been established) At 1318 hours, three minutes later, a tractor-trailer heading northbound in the heavy rainstorm swerved into the median to avoid traffic that had slowed, and struck the overturned pickup truck and the six rescuers (Diagram). Emergency services were dispatched at 1324 hours and arrived on the scene at 1332 hours. The victim was found unresponsive with significant head injuries. The victim and the physician were pronounced dead at the scene. The other fire fighter and the three other rescuers were transported to area hospitals. None of the rescuers were wearing a safety vest or any other type of reflective material, and there were no signs or signals (such as flares) to warn oncoming traffic of the incident scene. The Florida Highway Patrol crash report noted defective windshield wipers on the tractor-trailer. The driver of the tractor trailer was a 37-year old male who held a class A commercial driver’s license.

The coroner’s report listed the victim’s cause of death as multiple blunt force injuries with compound fractures of the skull.

Recommendation #1: Fire departments should develop SOPs for the response of off-duty fire fighters in their privately owned vehicles (POVs) to interstate highway incidents.1-5

Discussion: Career fire fighters responding off-duty in their privately owned vehicles (POVs) may not carry all of the necessary equipment (e.g., personal protective equipment, high-visibility vests, flags, cones, specialized rescue tools) to safely operate in or near moving traffic on highways, especially in adverse weather conditions. The victim’s department directs its personnel to stop and render aid when off-duty, therefore SOPs should be developed that include procedures specific for the safety of off-duty fire fighters while responding along interstate highways.

NFPA 1500, 6.2.3 states that “the fire department shall enact specific rules and regulations pertaining to the use of private vehicles for emergency response.” NFPA 1500, 6.2.3.1 states that “these rules and regulations shall be at least equal to the provisions regulating the operation of fire department vehicles.” Highways pose additional hazards for fire fighters (e.g., higher speed limits, larger vehicles, and a higher number of vehicles) and fire fighters responding along highways in their POVs may not be able to provide adequate protection from oncoming traffic.

Fire department and emergency response vehicles carry all of the necessary equipment and provide a means to block the scene, making a safer work zone. Fire fighters operating at an incident on a highway are always in danger of being struck by oncoming traffic. SOPs can help establish proper control measures that off-duty fire fighters can initiate upon arrival at an incident scene and prior to the arrival of emergency response apparatus. SOPs should include but not be limited to the following: POV positioning, minimum equipment required by off-duty fire fighters, methods to establish a secure work area prior to the arrival of emergency responders, and wearing the appropriate high-visibility protective clothing at all times. 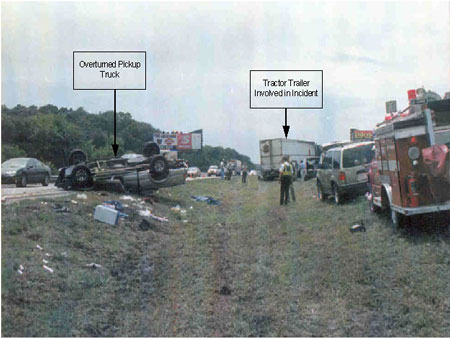 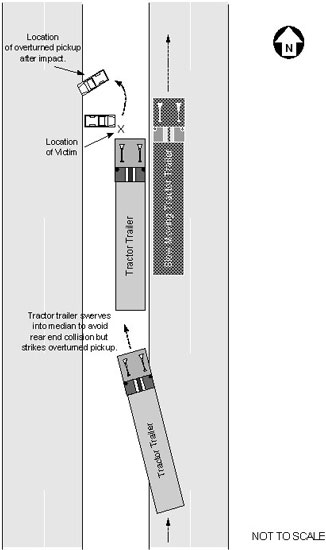