On March 2, 2002, a 48-year-old male volunteer fire fighter/engineer (the victim) was fatally injured when the tanker truck he was driving was struck by a freight train as he attempted to traverse a private, unguarded railroad crossing. The victim was returning to the station from a live-burn training exercise. The train struck the tanker truck on the passenger side just in front of the door. The victim was ejected and found lying approximately 75 feet from the track. He was transported to a hospital where he was pronounced dead. 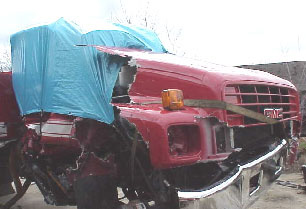 On March 2, 2002, a 48-year-old male volunteer fire fighter/engineer (the victim) was fatally injured when the tanker truck he was driving was struck by a freight train as he attempted to traverse a private, unguarded railroad crossing. On March 2, 2002, the U.S. Fire Administration (USFA) notified the National Institute for Occupational Safety and Health (NIOSH) of this fatality. On April 2, 2002, two safety and occupational health specialists from the NIOSH Fire Fighter Fatality Investigation and Prevention Program investigated the incident. The NIOSH team interviewed the Chief of the department and two county police officers who investigated the incident, took photographs of the crash site and of the tanker truck, and reviewed standard operating guidelines (SOGs), training records of the victim, and the death certificate.

This volunteer department has 45 uniformed personnel and serves a population of approximately 18,000 in an area of about 51 square miles. The 48-year-old victim had been a volunteer fire fighter for 2 .5 years and a driver/engineer for 6 months. The State requires 150 hours of various types of training before a fire fighter is permitted to participate in a structure fire. The department requires emergency vehicle operators to complete a 12-hour course in emergency defensive driving. This course consists of classroom content and a hands-on demonstration of driving skills. In addition, the department requires that emergency vehicle operators demonstrate their driving skills with a qualified instructor for each piece of apparatus they are going to operate. The victim had approximately 366 hours of State and departmental fire and rescue training, and he had completed the required training for the apparatus he was driving at the time of the incident.

Equipment. The 1,500-gallon (2001) tanker truck involved in the incident was approximately 23 feet, 5 inches long with a gross vehicle weighta of about 10,000 pounds; the tank was full of water at the time of the incident.

Weather/Road Conditions. The incident occurred at 2150 hours on a private, unguarded,b railroad crossing. The county police estimated that the slope of the private roadway the victim was driving up as he approached the tracks was approximately 17 degrees. The roadway was dry and the weather was clear and cold. A Crossbuckc sign was located on the right side of the roadway approaching the tracks (Photo). This is a high-density rail community with 30 trains per day.d

On March 2, 2002, a 48-year-old male volunteer fire fighter/engineer (the victim) was fatally injured when the tanker truck he was driving was struck by a freight train as he attempted to traverse a private, unguarded railroad crossing. Before the incident, the department had been conducting a live-burn training exercise at a site approximately 60 feet from the railroad track. The victim had driven one of two tanker trucks to the site for the training exercise; however, his truck was not used, and consequently, he did not actively participate in the exercise. The department, including the victim, had used this particular site for training 6-7 times during the past few months.

The victim departed the training exercise and was traveling north on a private roadway toward a public roadway when he was struck by a freight train as he attempted to traverse a single-track railroad crossing.

Witnesses told the investigating police officer that the tanker truck was traveling roughly 10-15 mph as it approached the crossing and seemed to be accelerating. Witnesses further stated that the train sounded its horn before the crossing and that its headlight was on. According to the county police, the train collided with the truck on the passenger side, just in front of the door and traveled approximately 66 feet before coming to rest facing south. The county police reported that the victim was ejected through the passenger window and was found lying approximately 75 feet from the track on the south side. According to the county police, the victim was not wearing a safety restraint at the time of the collision.

At 2152 hours, a call was made to Central Dispatch for assistance. At 2156 hours, a county ambulance arrived on the scene. The ambulance crew initiated CPR and intubated the victim. A medical helicopter arrived at 2203 hours and transported the victim to a hospital where he was pronounced dead.

The death certificate listed the cause of death as multiple blunt-force injuries.

Recommendation #1: Fire departments should ensure that drivers of fire department vehicles come to a complete stop at all unguarded railroad grade crossings during emergency response or nonemergency travel. 3–4,7

Discussion: Drivers of fire department vehicles should come to a complete stop at all unguarded railroad grade crossings and assure that it is safe to proceed before crossing the railroad track(s). Additionally, drivers should use caution when approaching and crossing any guarded grade railroad crossing. National Fire Protection (NFPA) 1500, § A-4-2.8 states that vehicle accidents at railroad crossings have resulted in a number of deaths and injuries to fire department members. A 1986 National Transportation Safety Board (NTSB) study concluded that a train warning horn is ineffective as a warning device for large commercial and emergency vehicles unless the driver stops the vehicle; idles the engine; turns off all radios, fans, wipers, and other noise-producing equipment in the cab; and lowers the window.

Discussion: SOGs should emphasize that the first priority is the safe arrival/return of fire department personnel and vehicles. In communities with a high volume of railroad traffic, SOGs should include procedures for safely traversing railroad crossings during emergency response and nonemergency travel. The department in this incident has an SOG for vehicle response to alarms which states that drivers must obey all State traffic laws and that departmental personnel must adhere to all State laws concerning emergency driving. The SOG does not specifically address traversing railroad crossings.

Recommendation #3. Fire departments should enforce polices that require that all fire fighters who ride in emergency fire apparatus are belted securely by seat belts. 4–6

Discussion: Fire fighters make many life-and-death decisions during a tour of duty, and one of the most important is putting on a seat belt after climbing aboard an emergency apparatus that has been called to respond. The fire department involved in this incident has an SOG that requires the use of seat belts for personnel riding in a fire department vehicle whenever the apparatus is in motion. The department also has a guideline that specifies that drivers obey all laws concerning emergency driving. Kentucky has a mandatory seat belt law.

Recommendation #4. Fire departments should provide fire fighter training on railway traffic safety in communities such as this where a high density of railway traffic exists. 7

Discussion: Railroad grade crossings present a unique traffic environment for motorists. Operating an emergency response vehicle adds an element of urgency to making decisions at highway-rail grade crossings. Consequently, special training regarding railroad traffic safety is essential for emergency responders such as fire fighters. Operation Lifesaver is an example of a nationwide, nonprofit organization that provides free educational programs (including a video that targets emergency responders) to eliminate collisions, deaths, and injuries at highway-rail intersections and on railroad rights-of-way. According to Operation Lifesaver, driver inattention and impatience are the most common factors contributing to collisions between motor vehicles and trains. Since the program began in 1972 (as of 2000), the number of train/motor vehicle collisions has been reduced by over 70%. Information can be obtained about Operation Lifesaver by calling 800-537-6224 or by accessing their website [http://oli.org/external icon]. (Link Updated 1/16/2013) 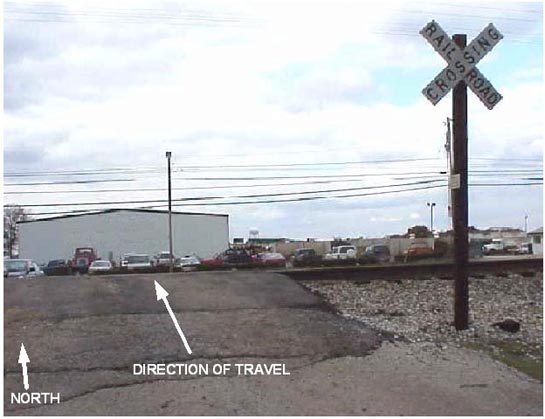 a The National Highway Traffic Safety Administration (US Department of Transportation) defines Gross Vehicle Weight Rating as the maximum rated capacity of a vehicle, including the weight of the base vehicle, all added equipment, driver and passengers, and all cargo loaded into or on the vehicle.1

b The Federal Railroad Administration (FRA) defines private crossings as those that are on a roadway not open to public use and that are not maintained by a public authority, e.g., a residential access crossing.2

c A Crossbuck is a type of passive warning device for railroad crossings. It is a white, reflectorized sign with the words RAILROAD CROSSING in black letters (Photo).

d This information was provided by an FRA official in a telephone conversation April 26, 2002.