On February 11, 2002, a 42-year-old male career fire fighter (the victim) was killed and another fire fighter was injured in a partial structural collapse while performing suppression operations at an apartment complex under renovation. The victim and three crew members were exiting the complex through a breezeway that connected the fire structure to an uninvolved structure when a section of brick veneer from the uninvolved structure collapsed onto the victim and the injured fire fighter. The injured fire fighter called for help and was freed by fire fighters. A personal accountability report (PAR) was called and it was determined that the victim was missing. A second search found the victim unresponsive and without a pulse beneath a pile of bricks. The victim was extricated, given emergency medical treatment, and transported to a hospital where he was pronounced dead.

NIOSH investigators concluded that to minimize the risk of similar occurrences, fire departments should

On February 11, 2002, a 42-year-old male career fire fighter (the victim) was killed and another fire fighter was injured in a partial structural collapse while performing suppression operations at an apartment complex under renovation. On February 12, 2002, the United States Fire Administration notified NIOSH of this fatality. On March 4-6, 2002, two Safety and Occupational Health Specialists and the Team Leader of the Fire Fighter Fatality Investigation and Prevention Program investigated this incident. Interviews and meetings were conducted with the Chief of the department, the Chief of Training, members of the Training Division, fire fighters from the department who were on the scene and directly involved in this incident, the presidents and representatives of the International Association of Fire Fighters (IAFF) and the Black Professional Fire Fighters Association (BPFFA). The NIOSH team visited the incident site and reviewed copies of witness statements, training records, standard operating procedures (SOPs), dispatch logs, fire/arson investigation reports, building blueprints, video footage, and a map of the fire scene.

This career department consists of 1,674 uniformed fire fighters. The department serves a population of about 1,100,000 in an area of approximately 378 square miles. The department requires all fire fighters to go through a 15-month training academy in which they leave as a certified NFPA Fire Fighter Level I/Paramedic. They are also Haz-Mat certified and certified Pump/Driver Operators. The victim had 10 years’ experience as a fire fighter for this department and over this time had taken a number of training courses including Live Fire Training.

Structure
The structure involved in this incident was one of several buildings in an apartment complex (constructed in 1963) that was under major renovation. The structure was a wood frame, platform construction with a brick veneer exterior. There were two stories above ground level and no floors below ground level. The pitched roof consisted of 5/8-inch plywood covered by felt paper and asphalt shingles. The wall systems consisted of 2- by 4-inch wood studs, with 3½-inch insulation, ½-inch plywood, and an exterior brick veneer finish. The floor system consisted of the following: First Floor – concrete slab on soil with wood floor joists (2-inch by 10-inch), Second Floor – concrete topping on plywood. Most of the carpeting and the original sheetrock (dry wall) had been removed.

On February 11, 2002, at approximately 1729 hours, Fire Dispatch notified this career department of a structure fire at a vacant apartment complex under renovation. Six apparatuses were dispatched on the first alarm. At approximately 1731 hours, Engine 26 (officer, driver, and two fire fighters) was the first to arrive on the scene and parked on the west side (Side 4, Diagram 2). Engine 26 reported fire coming from the roof and asked the next arriving engine company to bring water. Truck 26 (officer, driver, 2 fire fighters) arrived on the scene and parked behind Engine 26. The crew was told to set up an aerial ladder to protect exposures from fire extension but was unable to do so because of the steep slope of the driveway. At 1733 hours, Engine 14 and Battalion 6 arrived on the scene and assumed command (Incident Command). Battalion 6 reported the “same size-up,” announced command post and staging locations, declared the operation defensive, and transmitted a second alarm. The focus of the operation was to keep the fire from “jumping” the courtyard.

The second alarm (called at 1733) assignment consisted of three engines, two ladder trucks, two Battalion chiefs and a Deputy Chief. Crews deployed hoselines through the breezeway (between the northwest and southwest wings of the complex) into the courtyard to attack the fire from Side 2. The Truck 26 crew entered the courtyard through the breezeway to assist with exposure protection. At approximately 1736 hours, a third alarm, consisting of three engines, one ladder truck and one Battalion Chief, was transmitted. Engine 33 (officer, driver and 2 fire fighters [including the victim]) responded on the third alarm. Engine 33 arrived on the scene at approximately 1741 hours and reported to command. The Engine 33 crew left their apparatus parked on the south side (Side 4) of the complex and entered the courtyard with another crew. The Engine 33 crew went to the second floor of the southwest wing (building attached to the fire building via a breezeway) to check for fire extension in the attic but found none. The crew then went down the stairway to the ground floor and started to exit the courtyard via the breezeway to obtain more hoselines. As the officer from the crew reached the end of the breezeway, at approximately 1746 hours, he was knocked forward into the driveway by falling bricks (Photos 1 & 2). Shortly after crews made their way into the courtyard, a collapse occurred on the west side (collapse 1) followed by a collapse on the east side of the involved building (collapse 2). During this time, a deck gun from an apparatus positioned on the west side (Side 4) applied water to the fire structure. The injured fire fighter and the victim, who were walking together about 3 feet apart approximately 4 feet behind the officer, were hit by falling debris from the breezeway and brick wall. Because the southwest wing was considerably taller than the northwest wing, the water pipes running between the two buildings were equipped with 90-degree fittings (Diagram 1). The pipes ran down behind a brick veneer wall of the southwest wing and then into the attic of the northwest wing (fire building). The collapses in the fire structure exerted a pulling force on the 90-degree fittings to the water pipes behind the brick wall that eventually caused a section of bricks to come loose and fall onto the roof and second story floor of the breezeway. Afterward, the copper water pipes were pulled out about 10 inches from their original position (Photo 3). The State Fire Marshal found that the section of the breezeway that collapsed had rotten structural members supporting the breezeway floor and roof that contributed to its instability. Rescue crews went to the collapsed area to help the driver of Engine 33 who was calling for help. A pry bar was used to lift a heavy section of the breezeway from the injured fire fighter’s legs thus freeing him. This fire fighter sustained minor injuries and was able to walk out on his own. Rescue crews did not immediately realize there was another trapped fire fighter. A personal accountability report (PAR) was called whereupon it was determined that the victim was missing. Nearby fire fighters immediately began a second search and found the victim beneath the debris in the breezeway collapse area. Crews assessed the unresponsive victim and could not find a pulse. Note: According to the State Fire Marshal’s report, the victim was wearing his SCBA but did not have on his facepiece, consequently, his integrated PASS device was not activated. His secondary, manual PASS device was not turned on. The victim was removed from the site. Resuscitation efforts continued while he was transported to a local hospital, where he was pronounced dead.

The cause of death was listed as multiple blunt force injuries.

Recommendation #1: Fire departments should establish and monitor a collapse zone to ensure that no fire fighting operations take place within this area as part of defensive operations. 1–5

Discussion: During fire operations, two rules exist about structural collapse: (1) the potential for structural failure always exists during a fire, and (2) a collapse danger zone must be established. Due to the renovation activities, the fire building was unstable and began to collapse early in the fire operations. The sheetrock had been removed from the walls of this frame structure leaving its structural members vulnerable to the rapid spread of fire. A defensive attack was declared soon after fire suppression activities began. Part of a defensive strategy is establishing, and moving fire fighters outside of, a collapse zone. A collapse zone is an area around and away from a structure in which debris might land if a structure fails. This area should be equal to the height of the building plus have an allowance for debris scatter. Due to its proximity to the fire building, the breezeway in question would have been within the collapse zone; however, fire fighters used the breezeway for entry and exit of the courtyard.

Use of a master stream such as a deck gun presents a serious collapse danger. The average master stream delivers 500 gpm into a burning building – 2 tons of water per minute.2 The force of the high-pressure streams and the weight of the water poured into a structure weaken it.2 The Fire Marshal’s investigation concluded that as collapses occurred in the fire building, the (horizontal) water pipes in the attic pulled at the 90-degree fittings behind the brick wall of the southwest wing, causing a partial collapse of the brick veneer. After the collapse of the brick wall, it was revealed that the copper water pipes had been pulled out at least 10 inches from their original position (Photo 3).

Recommendation #2: Fire departments should ensure that an Incident Safety Officer, independent from the Incident Commander, is appointed and on scene early in the fire operation. 6–8

Discussion: According to NFPA 1561, Sec. 4.1.1, the Incident Commander is responsible for the overall coordination and direction of all activities at an incident. This includes overall responsibility for the safety and health of all personnel and for other persons operating within the incident management system. Whereas the Incident Commander (IC) is in overall command at the scene, certain functions must be delegated to ensure that adequate scene management is accomplished. According to NFPA 1500, Sec. 6-1.3, “As incidents escalate in size and complexity, the incident commander shall divide the incident into tactical-level management units and assign an incident safety officer to assess the incident scene for hazards or potential hazards.” The incident safety officer (ISO) is defined as “an individual appointed to respond to or assigned at an incident scene by the incident commander to perform the duties and responsibilities specified in this standard. This individual can be the health and safety officer or it can be a separate function.” NFPA 1521, Sec. 2-1.4.1 states that “an incident safety officer shall be appointed when activities, size, or need occurs.” Each of these guidelines complements each other and indicates that the incident commander is in overall command at the scene, but oversight of all operations is difficult. On-scene fire fighter health and safety is best preserved by delegating the function of safety and health oversight to the ISO. In this incident, a designated safety officer was dispatched on the second alarm and arrived on the scene shortly after the fatal collapse. 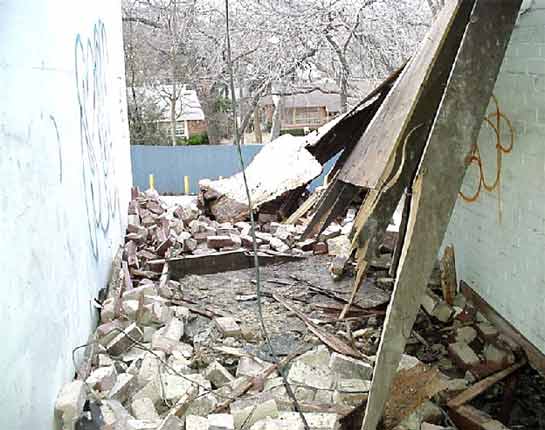 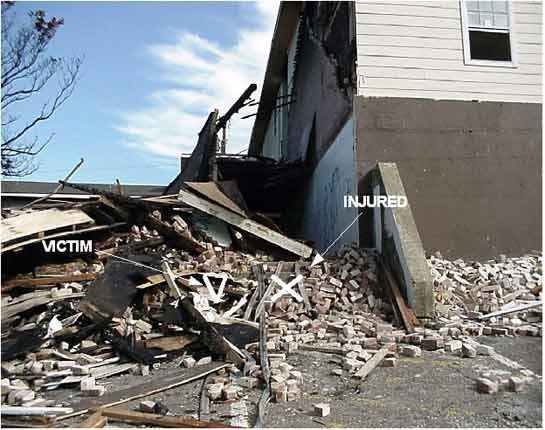 Photo 2. Breezeway – Approximate Locations of the Victim and the Injured Fire Fighter 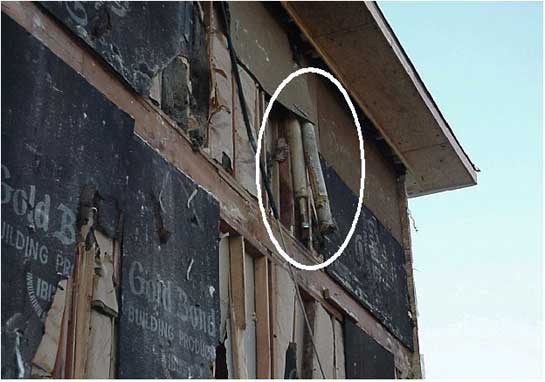 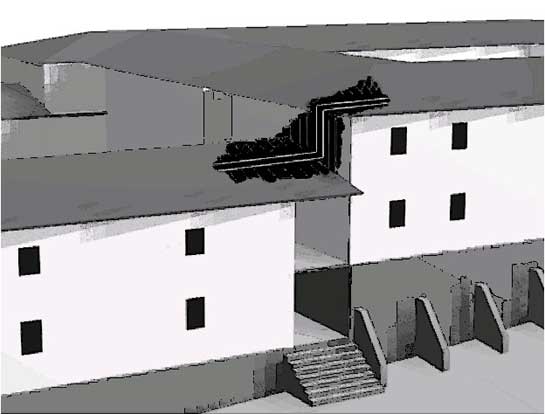