On January 21, 2002, a 26-year-old male volunteer fire fighter (the victim) was fatally injured after being ejected from his privately owned vehicle (POV) as a result of a motor-vehicle crash while responding to a confirmed house fire. The victim was traveling toward the fire station on a county road when, after cresting a small hill, his POV hit an icy section of road. His vehicle left the road, struck two mailboxes, traveled up an embankment, and overturned several times. The victim was ejected through the sunroof and was found lying unresponsive on the road. He was transported via ambulance to a local hospital and was life-flighted shortly thereafter to a regional trauma center where he was pronounced dead the next morning. 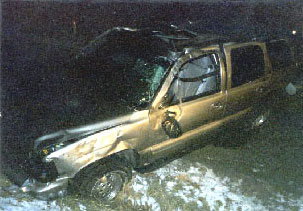 On January 21, 2002, a 26-year-old male volunteer fire fighter (the victim) was fatally injured after being ejected from his privately owned vehicle (POV) as a result of a motor-vehicle crash while responding to a confirmed house fire. On January 28, 2002, the U.S. Fire Administration (USFA) notified the National Institute for Occupational Safety and Health (NIOSH) of this fatality. On February 13, 2002, two safety and occupational health specialists from the NIOSH Fire Fighter Fatality Investigation and Prevention Program investigated the incident. The NIOSH team met with the Chief of the department and then visited the site of the crash accompanied by a civilian who was first on the scene. The civilian pointed out the approximate locations of the vehicle and victim at the time of the incident, after which photographs and measurements were taken. A telephone interview was conducted with one of the responding emergency medical technicians (EMTs) on February 15, 2002. The State police report, ambulance call sheet, training records of the deceased, and coroner’s report were reviewed.

The incident occurred on a rural, asphalt road with little or no shoulder. The road is approximately 16 feet wide with a posted speed limit of 55 mph. According to the state police report, the weather was clear and the road was mostly wet at the time of the incident except for the crash area where patches of ice were present. According to a civilian who lived near the crash site, and who was first on the scene, ice has a tendency to form on this part of the road because it is shielded from the sun by the embankment.

On January 21, 2002, a 26-year-old male volunteer fire fighter (the victim) was fatally injured after being ejected from his privately owned vehicle (POV) as a result of a motor-vehicle crash while responding to a confirmed house fire. The volunteer fire department was dispatched for a confirmed house fire at 2302 hours. The victim responded to the call from his residence. He was traveling east on a two-lane county road, approximately 1 mile from his home, when he crested a small hill, hit an icy section of road, and lost control of his vehicle. His POV (a 2001 sport utility vehicle) left the road, struck two mailboxes and an uphill embankment, and overturned. According to the report from the state police, the vehicle was estimated to have rolled three times and to have traveled approximately 160 feet before it came to rest upright (Photo and Diagram). The victim was ejected through the sunroof during one of the rollovers. Note: The state police report indicated that the victim was not wearing his safety belt at the time of the incident. The report further indicated that “unsafe speed” as a contributing factor. In a telephone interview, the investigating police officer noted that he was unable to estimate speed due to lack of physical evidence.

First on the scene was a neighbor who had heard the crash from inside her house and who found the victim lying on the road approximately 47 feet from his vehicle. The neighbor called emergency services. The dispatcher notified the volunteer department responsible for this area at 2312 hours of the motor-vehicle crash. Squad 1 (four EMTs, a radio operator, and a driver) responded at 2318 hours and arrived on the scene at 2322 hours. The victim was lying on the road; he was breathing on his own but was unresponsive. Squad 1 administered emergency medical care and transported the victim to a local hospital (arrival time, 2350 hours) where he received additional emergency treatment. The victim was life-flighted approximately 45 minutes later to a regional trauma center where he died the next day at 0827 hours.

The coroner’s report listed the cause of death as laceration of the brain secondary to blunt impacts to the head.

Recommendation: Fire departments should develop, implement, and enforce standard operating procedures (SOPs) regarding the safe operation of all vehicles responding to a fire alarm. 1, 2, 3, 4 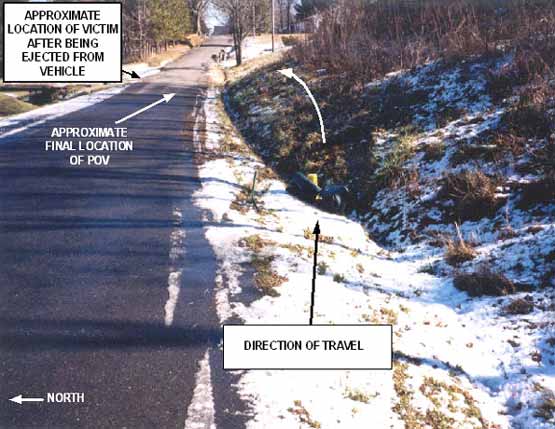