On November 19, 2001, a 21-year-old male volunteer fire fighter (the victim) died and a 32-year-old male Assistant Chief (the driver) was injured when he lost control of the tanker truck he was driving on a steep mountainous road. The driver received injuries and was transported by medical helicopter to a state hospital where he was hospitalized and then discharged the following day. The victim was transported by ambulance to a regional hospital where he was pronounced dead. 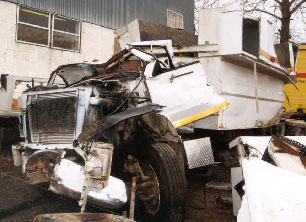 Tanker Truck Involved in This Incident

On November 19, 2001, a 21-year-old male volunteer fire fighter (the victim) died and a 32-year-old male Assistant Chief (the driver) was injured when he lost control of the tanker truck he was driving on a steep mountainous road. On November 20, 2001, the U.S. Fire Administration notified the National Institute for Occupational Safety and Health (NIOSH) of this incident. On December 6, 2001, a crash reconstructionist contracted by NIOSH visited and photographed the incident site and truck. On January 3, 2002, two Safety and Occupational Health Specialists investigated this incident. Interviews were conducted with the Chief, Assistant Chief (the driver) and members of the involved fire department. NIOSH investigators reviewed training records, the department’s standard operating procedures (SOPs), and the death certificate.

The volunteer fire department involved in this incident serves a population of about 2,500 in a geographical area of approximately 100 square miles. The volunteer department is comprised of 35 uniformed personnel.

The tanker involved in this incident was a 1990 truck with dual wheels on the rear axle. The truck was manufactured with a 1,500-gallon steel rectangular water tank equipped with baffles. At the time of the incident the water tank was full. The gross vehicle weight of the tanker with 1,500 gallons of water was approximately 45,000 lbs. The department kept maintenance records for the tanker. The State where the incident occurred requires performance of a yearly vehicle inspection, which the truck had received in February 2001. The department’s members perform a quarterly visual inspection of the apparatus, which occurred in October 2001, and the driver is responsible for a visual check after each response. The driver had a basic and current driver’s license. The State does not require a commercial driver’s license for persons operating emergency vehicles or apparatus. The department has a written policy requiring the use of seat belts.

The road on which the tanker was traveling was an unmarked, two-lane rural road. The steep mountainous road involved a succession of “S” curves and hairpin turns, and there were no shoulders in the area of the crash. The road has a posted speed limit of 55 mph. Weather conditions on the day of the incident were overcast, and the roadway was dry.

The department requires that National Fire Protection Association (NFPA) Fire Fighter Level I, Hazmat Awareness, First Aid and CPR training be completed within 12 months of becoming a member. The victim met the department training requirements. The department has procedures for fire fighters to become qualified drivers; however, no formal driver training or refresher training is required. Before being eligible to be a driver, fire fighters must operate and demonstrate their driving skills to a department officer or current driver before being qualified to be a driver. The required hours of drive time vary according to the type of apparatus. The tanker requires several months of driver training time. The Assistant Chief had 10 years of experience with the department, 6 of those years as a qualified driver. He had attended an 8-hour driving class offered by the State in 1997. The victim had 11 months’ experience with the department.

On November 19, 2001, at 1353 hours, the volunteer fire department was notified by Central Dispatch of a brush fire. At 1358 hours, the Assistant Chief (the driver) and a fire fighter (the victim) were en route to the scene. Note: According to the driver, he was the only occupant in the tanker wearing a seatbelt prior to the incident. Engine 81 from the same station responded ahead of the tanker with an Assistant Chief and a Captain on board. The engine and tanker were traveling southbound on a rural mountainous road that involved a succession of “S” curves and hairpin turns. The measured grade slopes ranged approximately -8% to -14% (Photo 1). The tanker was traveling approximately a mile behind Engine 81.

After traveling approximately 7 miles from the station, the driver encountered a steep-grade hill and downshifted from fourth to third gear. The driver reported that his speed was approximately 25 mph, and his brakes were operating correctly. As the driver negotiated a steep, sharp curve, he applied his brakes once and they worked; however, after several attempts to reapply the brakes, no braking pressure was present. Note: The reconstructionist’s report noted that the brake pressure may have been temporarily depleted due to prior use and the lack of downshifting. Downshifting would require less use of the braking system while driving the steep mountainous road. The driver applied the tanker hand brake and made a call on the radio that the tanker had lost its brakes. While telling the victim to jump, the driver unbuckled his seat belt in anticipation of jumping out of the tanker. The victim reportedly shook his head in a negative reply and attempted to put on his seat belt. Note: The tanker was equipped with a shoulder and lap seat belt safety restraint system for the driver and passenger positions. The reconstructionist’s report indicated that the driver and the victim were not wearing their seat belt safety restraint system at the time the tanker crashed.

The driver steered the tanker to the northbound (left) lane of the road and into a ditch in an attempt to slow down. While the tanker was traveling in the ditch it came out of gear and picked up additional speed. The driver estimated that the tanker was traveling in the ditch at a speed of approximately 45 mph. The tanker traveled in the ditch for approximately 60 feet before it rebounded onto the road. The tanker traveled across the road and down an extremely steep slope. Note: The slope had a measured grade slope of -92%. The tanker became airborne and traveled down the steep slope. The front right corner of the tanker severed a tree, and the tanker traveled further down the slope before the front of the vehicle nose-dived into the ground and flipped onto its roof as it came to rest (Photo 2). As the truck impacted the ground the 1,500-gallon water tank, which was at full capacity, moved forward, shearing the anchor bolts and straps holding the tank onto the truck. The detached tank was catapulted approximately 75 feet, crossing the road that Engine 81 was traveling before coming to rest on the bank of a creek.

Engine 81 was traveling in front of the tanker, and after completing a horseshoe turn, was in the path of the tanker. The Captain of Engine 81 witnessed the airborne tanker traveling down the slope and told the Assistant Chief, who was driving, to stop the engine. Some parts and equipment were ejected from the tanker, and some struck the back panel of Engine 81. The Assistant Chief and Captain from Engine 81 approached the tanker lying upside down on the hillside. The driver and the victim were entrapped in the tanker; however, both were conscious and verbally communicating with each other. The victim indicated that he was having trouble breathing because the dash board was compressing his chest.

At 1428 hours, Rescue 85 arrived on the scene. The Chief from the department involved in the incident arrived on the scene in his privately owned vehicle and assumed the role of IC. Between the hours of 1430 and 1440, the ambulance and a medical helicopter arrived on the scene. The fire fighters stabilized the tanker and used an hydraulic tool, spreaders, and cutters to remove the driver and the victim. The driver was transported in a medical helicopter to a state hospital where he was hospitalized and then discharged the following day. The victim was transported by an ambulance to a regional hospital where he was pronounced dead.

The death certificate lists the cause of death as blunt-force traumatic head injury.

Recommendation #1: Fire departments should ensure that all drivers of fire department vehicles receive driver training at least twice a year. 1, 2, 3

Discussion: Driver training should be provided to all driver/operators as often as necessary to meet the requirements of NFPA 1451, Standard for a Fire Service Vehicle Operations Training Program. Additionally, the training should also be in accordance with NFPA 1002, Fire Apparatus Driver/Operator Professional Qualifications. These standards state that departments should establish and maintain a driver training education program and each member should be provided driver training not less than twice a year.

This training should be documented and cover defensive driving techniques during emergency and nonemergency conditions. Every driver/operator should be familiar with the basic concepts of safe driving. They include estimating visual lead time, knowing braking and reaction times, combating skids, and knowing evasive tactics. In addition to receiving this training, each driver should operate the vehicle and perform tasks that the driver/operator is expected to encounter during normal and emergency operations (e.g., local terrain, roadway characteristics, and the vehicle capabilities and limitations) and to ensure the vehicle is safely operated in compliance with all applicable State and local laws.

In this incident, the driver/operator was traveling on a rural, mountainous road. The long, steep grade and the combined weight of the truck and the water required that the driver/operator understand the need to select an appropriate speed, use a lower gear, and apply proper braking techniques to control the truck. Proper speed control and proper braking helps deter brake declination on long downgrades. The use of brakes on long and/or steep downgrades is only a supplement to the braking effect of the engine.

Recommendation #2: Fire departments should enforce standard operating procedures (SOPs) on the use of seat belts in all emergency vehicles. 4

Discussion: Fire departments should enforce SOPs on the use of seat belts. The SOPs should apply to all persons riding in all emergency vehicles and state that all persons should be seated and secured in an approved riding position anytime the vehicle is in motion. 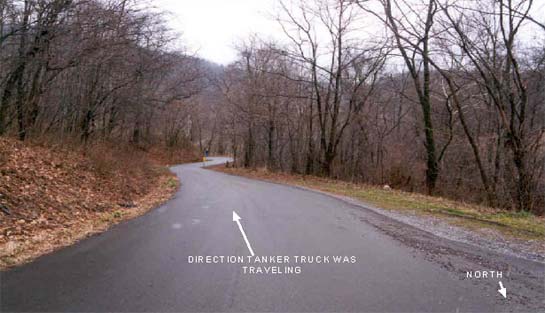 Photo 1. Southbound View of the Road the Tanker Truck was Traveling 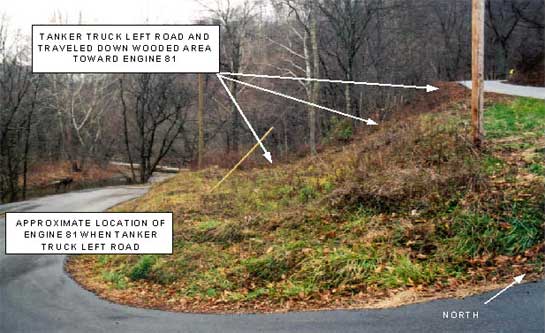 Photo 2. View of the Wooded Area the Tanker Traveled Down