On March 6, 2001, a 41-year-old male volunteer Assistant Chief (the victim) died after the engine he was driving left the road, overturned, and struck a tree. The victim (driver) and a fire fighter had responded in Engine 5 at 1445 hours to a structure fire. At 1503 hours, the victim lost control of the engine on an icy, snow-packed gravel road. The engine left the road, overturned onto the passenger’s side, and struck a tree. The victim was thrown into the passenger’s side, landing on top of the fire fighter. The victim was entrapped and had to be extricated from the vehicle. Emergency Medical Technicians performed cardiopulmonary resuscitation (CPR) on the victim for approximately 20 minutes before pronouncing him dead at 1530 hours at the scene. The fire fighter (passenger) was able to climb out of the cab and was provided medical attention to ensure that he had not sustained any serious injuries. NIOSH investigators concluded that, to minimize the risk of similar occurrences, fire departments should 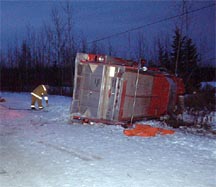 On March 6, 2001, a 41-year-old male volunteer Assistant Chief (the victim) died after the engine he was driving left the road, overturned, and struck a tree. The National Institute for Occupational Safety and Health (NIOSH) was notified of this incident on March 7, 2001, by the United States Fire Administration. On May 15, 2001, a Safety and Occupational Health Specialist from NIOSH’s Fire Fighter Fatality Investigation and Prevention Program investigated this incident. Meetings were conducted with the Chief of the department, an Investigator from the State Police Department, the municipality’s administrative liaison, and the city’s public health and safety representative. Interviews were conducted with the officers, fire fighters, and a power utility lineman involved in this incident. The NIOSH investigator reviewed the state police’s copies of site maps, drawings, photos, witness statements, dispatch run sheets, accident report, the fire department’s standard operating procedures, and the victim’s training records. A site visit was conducted and the site was photographed.

The site of the incident is a gravel road measuring 28 feet in width with no shoulders. The incident site is 2.2 miles north of the intersection of a paved county road and 337 feet south of the driveway to the structure fire. The engine struck a tree (measuring 12 inches in diameter) located 12 feet from the edge of the road (See Diagram). The incident site has a posted speed limit of 50 mph. The engine involved in this incident is an 18 year-old Class-A pumper that measures 8 feet wide and 25 feet long. The engine has a square-shaped 1,000-gallon water tank, not equipped with baffles. The engine is equipped with air brakes. The gross vehicle weight is 27,500 lbs, and at the time of the incident, the water tank was full, which added 8,500 lbs to the total weight of the engine. An inspection of the engine was completed by the state police, and no mechanical problems were identified as a contributing factor to this incident. At the time of the incident, the weather was reported as being cloudy with a temperature of 340 F. The road was covered with a thin layer of ice on top of packed snow.

On March 6, 2001, at 1442 hours, a call came into Central Dispatch reporting a structure fire. At 1443 hours, Station 5, Station 6, and Station 7 were toned out. Note: The victim and fire fighter were members of Station 5. Stations 5, 6, and 7 are automatic aid companies. The victim and fire fighter responded in Engine 5 at 1445 hours. Both a fire fighter/emergency medical technician (EMT #1) and a fire fighter responded in their personally owned vehicles (POVs). Other apparatus responding to the structure fire were Tender 5 with a driver/operator (at 1450 hours), Tender 7 with a driver/operator (at 1453 hours), Engine 7 with a driver/operator (at 1453 hours), Engine 6 with a driver/operator and a fire fighter (at 1454 hours), and Tender 6 with a driver/operator (at 1457 hours). Additional fire fighters responded in their POVs. At 1501 hours, the fire fighter/emergency medical technician (EMT #1) and a fire fighter arrived on the scene of the structure fire in their POVs. The fire fighter assumed incident command (IC), conducted a size-up of the incident, and reported to Central Dispatch that they had a working garage fire. The IC then met with EMT #1 at the end of the driveway to the garage fire and instructed her to have the driver/operators back their apparatus down the driveway when they arrived on the scene. Engine 5, followed by Tender 7, the power company’s service truck (a lineman [driver] followed the apparatuses to cut the electrical service drop to the structure); Engine 6, and Tender 6 were approaching the scene from the south. As Engine 5 approached a curve in the road, the victim slowed the apparatus down after seeing smoke to his left. Note: The smoke was coming from a local trash site that was incinerating garbage at the time of the incident. The victim proceeded through the curve toward the structure fire. Note: The driver/operator of Tender 7, who was following Engine 5, reported to state police that he was operating Tender 7 at a speed of approximately 50 mph. At 1503 hours, the fire fighter on Engine 5 radioed Central Dispatch reporting that they were arriving on the scene (see Photo 1). As the fire fighter completed his report of their arrival to Central Dispatch, the victim lost control of the engine. The engine fish-tailed and the victim tried to straighten out the direction of travel of the apparatus. The victim overcorrected, causing the rear wheels on the passenger’s side of the vehicle to go off the road. The apparatus continued to travel into the southbound (left lane) before the victim overcorrected, causing the vehicle to travel back toward the northbound lane. The apparatus left the road, overturned onto the passenger’s side, and struck a tree (See Diagram and Photo 1). The victim was thrown into the passenger’s side, landing on top of the fire fighter. Tender 7 was just coming out of the curve when the driver/operator saw Engine 5 sliding and equipment falling off the apparatus. The IC and EMT #1 witnessed Engine 5 losing control before leaving the road and overturning. At 1504 hours, EMT #1 radioed Central Dispatch reporting that Engine 5 had overturned and that they needed extrication equipment. At 1504 hours, Rescue 20 was toned out for the overturned engine. The IC and EMT #1 ran to the overturned apparatus, and the driver/operator of Tender 7 slowed to see if they needed any assistance. They replied that they didn’t need assistance at this time so the driver/operator of Tender 7 proceeded to the garage fire. Note: The driver/operator of Tender 7 reported to the NIOSH investigator that he had not experienced any icy conditions on the road until he attempted to enter the driveway leading to the garage fire. The power company lineman stopped to help the IC and EMT #1. Engine 6 and Tender 6 proceeded to the garage fire. The EMT told the lineman that they had two fire fighters trapped inside the cab of the Engine. She told him that one of the fire fighters was conscious (the passenger) and the other fire fighter (the victim) was unconscious. The windshield of the cab was partially knocked out by the impact with the tree. They attempted to pull the windshield out by hand but were unsuccessful. The lineman then pulled his truck to the south side of the incident scene and grabbed his chainsaw to cut the tree that Engine 5 had struck (the tree was still standing and was hindering their access to the cab). While cutting the tree, the lineman used the winch (20,000 lbs) on the front of his truck to pull the tree away from the apparatus. The windshield was removed from the apparatus by attaching the hook of the cable from the winch to the center of the cab’s roof (see Photo 2). The victim was pulled from the cab, and EMT #1 began administering cardiopulmonary resuscitation (CPR). Medic 1 (EMT #2), who had responded at 1508 hours, arrived on the scene at 1525 hours. The two emergency medical technicians (EMT #1 and EMT #2) continued administering CPR on the victim for approximately 20 minutes before pronouncing the victim dead at the scene. The fire fighter was able to climb out of the cab and was provided medical attention before being transported in Medic 1 to the area hospital for further medical evaluation.

The death certificate lists the cause of death as multiple blunt force injuries.

Recommendation #1: Fire departments should ensure that all drivers of fire department vehicles are responsible for the safe and prudent operation of the vehicle under all conditions.1

Discussion: Fire departments should ensure that drivers/operators of fire service vehicles are familiar with hazardous routes in their area (e.g., snow-/ice-packed gravel roads) and always maintain a safe speed. Additionally, drivers of large apparatus should use extreme caution when driving on ice- or snow-covered roads.

Recommendation #2: Fire departments should ensure that apparatus equipped with water tanks are provided with baffles to control the water’s movement.2

Recommendation #3: Fire departments should enforce standard operating procedures (SOPs) on the use of seat belts in all emergency vehicles.1,3 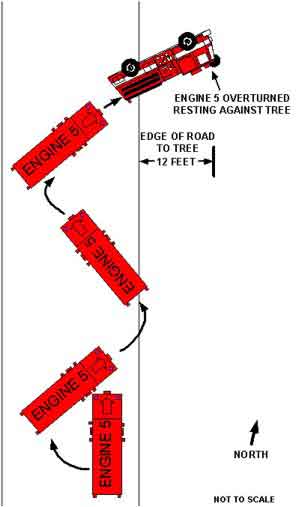 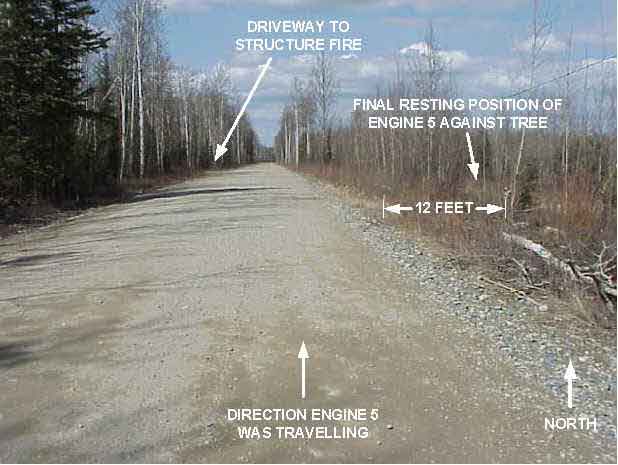 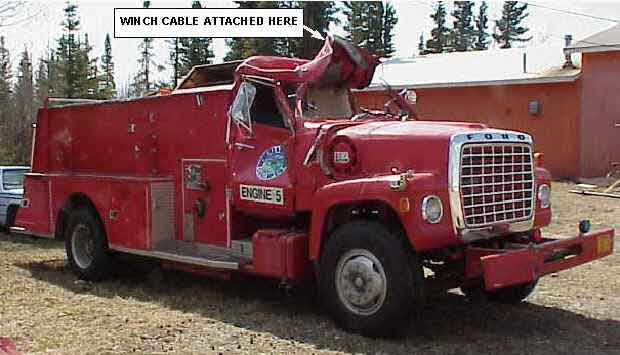