On January 12, 2001, a 21-year-old volunteer fire fighter died from injuries he received when the tanker he was driving struck a utility pole and overturned while responding to a grass fire. The incident occurred while he was responding in Tanker 5 to a call which had been dispatched as a grass fire. En route to the call the tanker was traveling eastbound on a two-lane state road, and after making a moderate curve the tanker drifted off the roadway on the right eastbound lane. The victim lost control of the tanker after he overcorrected to bring the tanker back onto the roadway. The tanker continued to travel across the left westbound side of the roadway, entered a ditch, hit an embankment and struck an utility pole. The tanker overturned completing one revolution then continued to slide on the left westbound side of the roadway, before coming to a rest on the passenger side with the victim entrapped under the tanker. The victim was extricated, pronounced dead on the scene, and removed by the coroner. 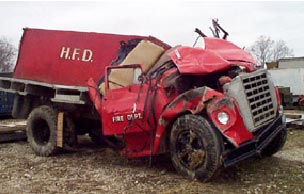 Tanker Truck Involved in This Incident

On January 12, 2001, a 21-year-old volunteer fire fighter died from injuries sustained in a motor-vehicle incident that occurred while responding to a grass fire. On January 16, 2001, the U.S. Fire Administration notified the National Institute for Occupational Safety and Health (NIOSH) of this incident. On March 7, 2001, two safety and occupational health specialists from the NIOSH, Division of Safety Research, investigated the incident. Meetings and interviews were conducted with the state police patrolman and police reconstructionist, the chief and members of the fire department involved in the incident, and with members of neighboring fire departments who had responded to provide mutual aid. The investigators visited the incident site and photographed the tanker. They reviewed copies of the police and reconstructionist report, training records, photos, standard operating procedures (SOPs), and the death certificate. The volunteer fire department involved in the incident serves a population of 2,500 in a geographic area of 6 square miles and is comprised of 21 volunteer fire fighters. The tanker in this incident was a 1974 truck with a 1,500-gallon square steel tank equipped with baffles. The tank was full of water at the time of the incident. The tank was manufactured in 1973, and had been placed on two prior trucks, before being placed on the truck in this incident in 1989. The truck had been on loan to the department since 1989 from the U.S. Division of Forestry. The gross vehicle weight rating (GVWR) of the truck was 16,000 lbs. The department’s members perform and document a monthly visual inspection of all the equipment and apparatus. In the State of Kentucky there are no requirements for a special class or type of driver’s license, or a required state vehicle inspection, for this type of fire apparatus. Weather conditions on the day of the incident were clear and the temperature was approximately 45° F. The department requires all fire fighters to complete 20 hours of State training to be an active fire fighter. The victim was certified as a fire fighter by the state of Kentucky, which requires 150 initial training hours and 20 hours of refresher training each year. The department in this incident requires drivers to be at least 18 years of age, and to attend an 8-hour driving course offered by the State. The training requires demonstration of driving skills before being qualified to drive an apparatus. The victim had met the department’s driver training requirements, and had been a driver for the department for approximately 4 years. The victim had six years of volunteer fire fighting experience, two of those years as a junior firefighter.

On January 12, 2001, at 1404 hours, the volunteer fire department was notified by Central Dispatch of a grass fire. At approximately 1407 hours, Unit 2 responded with two fire fighters on board and at approximately 1409 hours, Tanker 5 responded with a fire fighter (the victim) driving. At approximately 1420 hours, Unit 3 responded with a Chief driving, an Assistant Chief, a Captain, and a fire fighter on board. The tanker was traveling eastbound on a two-lane state road, with a speed limit of 55 mph (see Photo #1). After making a moderate curve approximately 3 miles from the station, for unknown reasons the tanker’s right-side tires drifted off the roaNote: The speed of the tanker could not be determined by the state police.dway on the right eastbound side. Note: The tanker continued to travel approximately 100 feet. There were no driveable shoulders in this area of the road. The victim lost control of the tanker as he attempted to bring it back onto the roadway. The victim overcorrected when the tanker came back onto the roadway. The tanker continued to travel across the left westbound side of the roadway, entered a ditch, hit an embankment, and struck a utility pole (see Diagram). Note: When the tanker proceeded back onto the roadway it traveled approximately 12 feet before hitting the embankment. The tanker overturned approximately one complete revolution and slid on the driver’s side as it continued to travel on the left westbound side of the roadway. Note: After the tanker struck the utility pole it traveled approximately 30 feet until it came to rest. The tanker came to rest on the passenger side, partially off the left (north) side of the roadway (see Photo 2). The victim was entrapped on the passenger side under the crushed area of the tanker. A fire fighter, who was responding to the station for the call, came upon the incident scene, performed a quick search to try to locate the victim, and called 911 for help. At 1425 hours, Central Dispatch received a call to report a motor-vehicle incident involving a fire fighter, and dispatched an ambulance. Unit 3 heard the radio traffic and arrived on scene. The initial fire fighter was at the tanker looking for the victim, and advised the Chief from Unit 3 that the victim could not be located, however, he had found the victim’s helmet in the ditch line. At 1428 hours, the Chief radioed to Central Dispatch to request additional rescue assistance. The Assistant Chief from Unit 3 assumed the role of Incident Command (IC). The initial fire fighter at the incident and a fire fighter from Unit 3 left the scene in a privately owned vehicle (POV) to return to the station to bring another apparatus to the scene. At 1430 hours, Central dispatched a combination department to respond to the scene. Between 1431 hours and 1433 hours, the following responded to the incident scene: Brush Truck 1 with a Captain and two fire fighters, Tank 1 with a Chief and one fire fighter, and Engine 9 with four fire fighters on board and an Assistant Chief responding in his POV. The Captain from Unit 3 got down on the ground to look for the victim under the tanker and was able to locate the unconscious victim, but was unable to gain access to him. Note: The victim was wearing bunker gear and a wildland fire fighting coat. He was in a sitting position under the cab and tank area with the roof of the cab and the battery of the tanker resting on his lap. The tanker was equipped with a lap seat belt safety restraint system for the driver and passenger positions. The state police believe that the victim was not wearing his seat-belt safety restraint system at the time of the incident. Unit 2 arrived on scene with two fire fighters after providing assistance at the grass fire, and they assisted other members of the department with removing equipment from all the units involved in the extrication operation. At 1439 hours, an Assistant Chief from the mutual aid department arrived in his POV on the scene. A Captain, an Assistant Chief from Unit 3, and the fire fighters used cribbing, spreaders, and cutters from the jaws of life to slowly raise the passenger side of the tanker, approximately 2 feet. The a mbulance arrived on scene, and one of the attendants crawled under the cab area to check the status of the victim and reported that the victim did not have a pulse. The Assistant Chief from Unit 3, acting as the IC, turned the role over to the Captain from Unit 3. Between 1447 hours and 1448 hours, Brush Truck 1, Tank 1, and Engine 9 arrived on the scene. The Chief from Tank 1 arrived on the scene, and he was advised by the Assistant Chief who had arrived in his POV that the victim had expired and that they were waiting for the Coroner to arrive. The Chief from Tank 1 assumed the role of IC from the Captain of Unit 3. The Chief from Tank 1 relinquished incident command for the extrication operation to the Captain from Brush Truck 1. The fire fighters from both departments added additional cribbing and air bags to bring the passenger side of the tanker approximately 5 feet off the ground. The Coroner arrived and pronounced the victim dead at the scene. The fire fighters providing mutual aid used cutters to remove debris from the victim, and then removed him from under the tanker. The victim was removed from the scene by the Coroner.

The death certificate lists the cause of death as blunt force injuries.

Recommendation #1: Fire departments should establish, implement, and enforce standard operating procedures (SOPs) on emergency vehicle operation and the use of seat belts in all emergency vehicles. 1, 2, 3, 4

Recommendation #2: Fire departments should ensure that the apparatus chassis is adequate to carry the weight of the unequipped apparatus, the water and tank, hose load, personnel weight, ground ladders, and the designed miscellaneous equipment allowance.5

Discussion: The Gross Axle Weight Rating (GAWR) and the Gross Combination Weight Rating (GCWR) or Gross Vehicle Weight Rating (GVWR) of the fire apparatus must be adequate to carry the weight of the unequipped apparatus, the tank fully loaded with water, the specified hose load, personnel weight, ground ladders, and the miscellaneous equipment allowance. The GVWR for the chassis on the tanker in this incident was 16,000 lb. The tanker at the time of the incident was hauling 1500 gallons of water and had a baffled steel tank. The combined weight of the 1500 gallons of water and the tank was estimated to be in excess of 13,600 lbs. The estimated weight did not include the additional weight of the tank frame, engine, cab, personnel, and other equipment, which would have exceeded the Gross Vehicle Weight Rating.

Recommendation #3: Fire departments should establish a vehicle maintenance checklist so that vehicle deficiencies can be identified and ensure that any vehicle found to be unsafe is placed out of service until repaired.6

Discussion: Maintenance schedules should be established and recorded as an integral part of a well-planned maintenance program. The maintenance program should include daily, weekly, and periodic maintenance service checks. The daily preventive check should follow the manufacturer’s handbook and should include items such as oil level, coolant level, batteries, visible and audible warning signals, fuel levels, and tires for wear, cuts, and proper inflation. If deficiencies are found during maintenance checks, the apparatus should be removed from service until deficiencies are corrected. At the time of the investigation, it was determined that the front tires on the truck were in very poor condition and showed excessive wear. The department in this incident performs and documents weekly visual checks of the department vehicles; however, there are no procedures in place on when to declare a vehicle unsafe and to be removed from service until it is repaired or replaced. 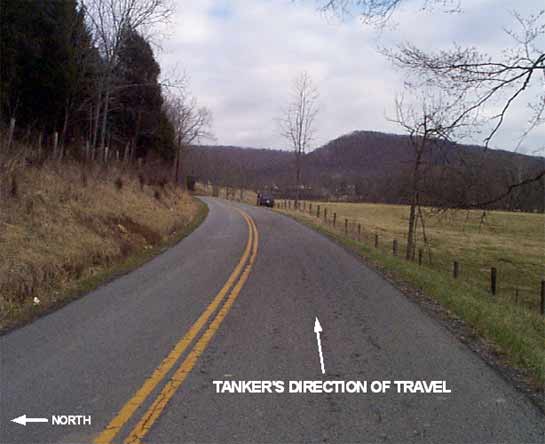 Photo 1. Eastbound View of the Road Where the Tanker Veered off of Road and Overturned. 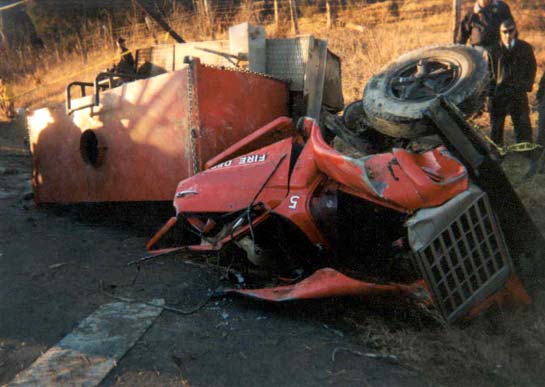 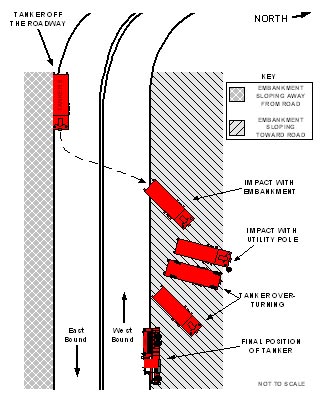