On July 2, 2000, a 17-year-old male volunteer junior fire fighter (the victim), died after his privately owned vehicle (POV) collided with a farm tractor. At 1535 hours, the volunteer fire department was dispatched to a structure fire, and the victim responded in his POV to the fire station. En route to the station the victim was traveling in the southbound (right) lane on a two-lane township road when after negotiating a curve, the victim’s POV drifted into the northbound (left) lane of the road. Traveling northbound was a driver on a farm tractor with an attached front-end loader. The victim’s POV ( pickup truck) struck the left side of the front-end loader, which on impact entered the windshield and pushed through the “A” post, forcing back part of the roof to the bed area. The victim was found unconscious in his POV and was transported by a helicopter to an area hospital, where he was pronounced dead approximately 1 hour after the incident.

On July 2, 2000, a 17-year-old male volunteer junior fire fighter died from injuries sustained in a motor-vehicle crash that occurred while responding to the fire station in his POV for a call. The victim’s POV was a small pickup truck. The farm tractor involved in this incident was a 1954 tractor with an attached front-end loader. On July 6, 2000, the U.S. Fire Administration notified the National Institute for Occupational Safety and Health (NIOSH) of this incident. On August 21, 2000, a safety and occupational health specialist and the team leader from the NIOSH Fire Fighter Fatality Investigation and Prevention Program investigated the incident. Interviews were conducted with the Chief and members of the fire department involved in the incident. Copies of witness’ statements, the police report, and death certificate were reviewed. The victim’s training records and the department’s standard operating procedures (SOPs) were also reviewed. The incident site was visited and photographed. The volunteer fire department involved in this incident serves a population of 3500 in a geographical area of 27 square miles. The volunteer department is comprised of 35 volunteer and 2 junior fire fighters. Weather conditions on the day of the incident were clear and the roadway was dry. The victim had a basic and current Class F driver’s license. The victim was not wearing his seat belt. However, due to the impact and final position of the front-end loader on the victim’s side of the vehicle, the outcome of the incident would have likely still been fatal for the victim. The road on which the victim was traveling was an unmarked two-lane, asphalt township road which measured approximately 20 feet wide. The road had a posted speed limit of 35 mph, and a caution speed at the curve of 15 mph. There are no shoulders in the area of the collision. The State of Pennsylvania has a minimum age requirement of fourteen years old to be a junior fire fighter, and recommends that a junior fire fighter attend an 88-hour course on the Essentials of Fire Fighting to participate in fire suppression activities. The victim had completed approximately 21 hours of various State and department fire and rescue training courses. The victim had been a junior fire fighter with the department for approximately 2 years.

On July 2, 2000, at 1535 hours, the volunteer fire department was notified by Central Dispatch of a structure fire. The junior fire fighter (the victim) was responding to the fire station in his POV. En route to the station the victim was traveling in the southbound (right) lane on an unmarked, two-lane township road, approximately 2 miles from the fire station (see Photo). The posted speed limit was 35 mph with a posted caution speed of 15 mph at the curve. After making the curve the victim’s POV (pickup truck) drifted into the northbound (left) lane of the road. Note: At the time of the incident, next to the northbound lane, there was 3-foot tall standing grass from the edge of the road, and approximately 3 feet from the edge of the road, there was a field which had approximately 4-foot tall standing corn crop. It is believed that this may have prevented the victim from seeing traffic in the northbound (left) lane while making the curve. The state police were unable to determine an estimated speed of the POV. In the opposite direction traveling northbound was a driver of a farm tractor with an attached front-end loader which was in a raised position. Note: The state police estimated that the front-end loader at the time of impact was approximately 2-3 feet off the ground. The victim’s POV struck the left side of the front-end loader attached on the farm tractor (see Diagram). The driver of the farm tractor was uninjured and got off the tractor and looked into the POV and saw that the victim was unconscious. The driver went to a nearby residence and made a call for help. At 1535 hours, Engine 34 with a Chief and 3 fire fighters and Rescue 34 with a Lieutenant and 3 fire fighters were dispatched to the structure fire. However, while en route at 1540 they were requested to respond to a motor-vehicle incident with injuries. Also at 1540 hours, Central dispatched the call to Rescue 71, who responded with a Chief, Assistant Chief, a Captain, a Lieutenant, and 3 fire fighters. At 1542 hours, Rescue 113-5 was also dispatched and responded with a Captain, a Lieutenant and 3 fire fighters. Also responding in separate POVs from Rescue 113-5 was a Chief and an Assistant Chief. An ambulance was also dispatched at approximately this time and was first to arrive on the scene. The Chief and Assistant Chief with Rescue 113-5 that responded in their POVs arrived next on scene. Once on scene they observed that an ambulance was already on the scene, and that the front-end loader on the farm tractor was in an elevated position, and on impact with the victim’s POV had pushed through the windshield and the “A” post. The force of impact had pushed the driver’s side roof, door, and floor area of the truck back toward the bed. They looked into the POV and observed that the victim was unconscious and was bleeding from his nose and was in a fetal position in the cab area with his back against the passenger side door. Ambulance personnel were providing medical care to the victim through an opened window, and requested that he be transported to the hospital by a helicopter. Rescue 113-5 arrived on scene and the Captain was instructed by the Assistant Chief with Rescue 113-5 to prepare equipment for a possible extrication. Ambulance personnel made preparations for the victim to be removed from the truck. After a further assessment emergency personnel were able to manually open the doors on the victim’s POV. Engine 34, Rescue 34, and Rescue 71 arrived on the scene and were directed by the Chief of Rescue 113-5 to setup a landing zone in a nearby field, approximately 100 yards away from the scene. Emergency personnel and fire fighters removed the victim from the POV and transported him to the landing zone. The helicopter landed at approximately 1622 hours, and the victim was loaded and transported to an area hospital. When the victim arrived at the hospital he had no heartbeat, and he was pronounced dead at 1719 hours.

The death certificate lists the cause of death as blunt force trauma to the head and trunk.

Following department SOPs and State motor-vehicle codes for safe driving and operating a POV while responding to a fire alarm is of paramount importance to fire fighters, as well as the general public. Such procedures for responding to a fire alarm, or to a distress call of any nature, are addressed in the safety rules and regulations of the departments SOPs. The department requires fire fighters to report in a safe manner as not to endanger themselves, others, or property, and emphasizes that safe arrival is the first priority. The motor-vehicle code in the state where the incident occurred addresses the requirement for a motor-vehicle operator to drive on the right side of the roadway in a regulation entitled “Rules of the Road in General.” The regulation states that upon roadways of sufficient width, a vehicle shall be driven upon the right half of the roadway. In this incident, after making a curve the victim’s POV drifted into the northbound (left) lane of the road, which was in the path of the driver on the farm tractor with the front-end loader. 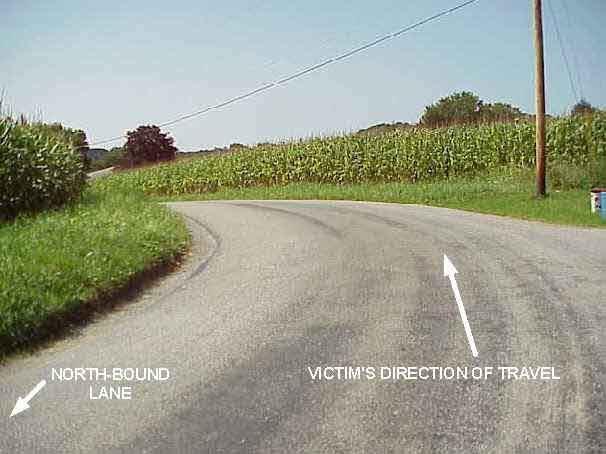 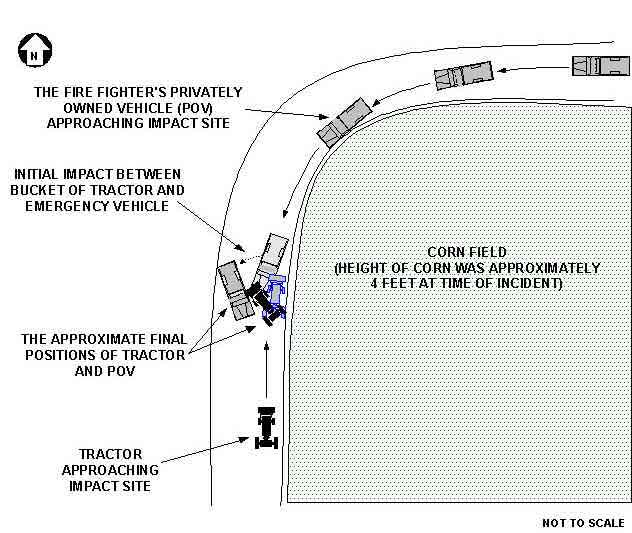 Diagram. Aerial View of Incident Scene, showing the approximate locations of the tractor and the fire fighter’s POV while each approached the incident scene and their positions after impact.