On May 27, 2000, a 27-year-old male volunteer fire fighter (the victim) died after losing control of the pumper truck (Engine 40) he was driving, which rolled approximately one and three-quarter revolutions and slid before coming to rest. At 1522 hours, the fire department was dispatched to a motor-vehicle incident, with unknown injuries. At 1523 hours, the victim responded in Engine 40. Also responding to the scene was a Captain in his privately owned vehicle (POV) and an Assistant Chief in a department vehicle. At 1539 hours, the victim radioed to Central Dispatch that the call was unfounded and he was returning to the station. En route to the station, the engine was traveling northbound on a two-lane state road with the Captain following behind (see Photo #1). The engine drifted off the roadway on the right (east) side and passed over a large hole created by erosion at the end of a drainage culvert. The victim lost control of the engine after he overcorrected and applied his brakes in an attempt to steer the engine back onto the road. The engine rotated counterclockwise, came back onto the roadway and overturned. The engine rolled approximately one and three-quarter revolutions as it continued to skid, traveling northbound (see Diagram). The victim was ejected from the engine and sustained fatal injuries as a result of the collision. The engine came to rest on its left side, facing west and blocking the southbound lane of the roadway. The cab area of the engine burst into flames as it sat at rest. 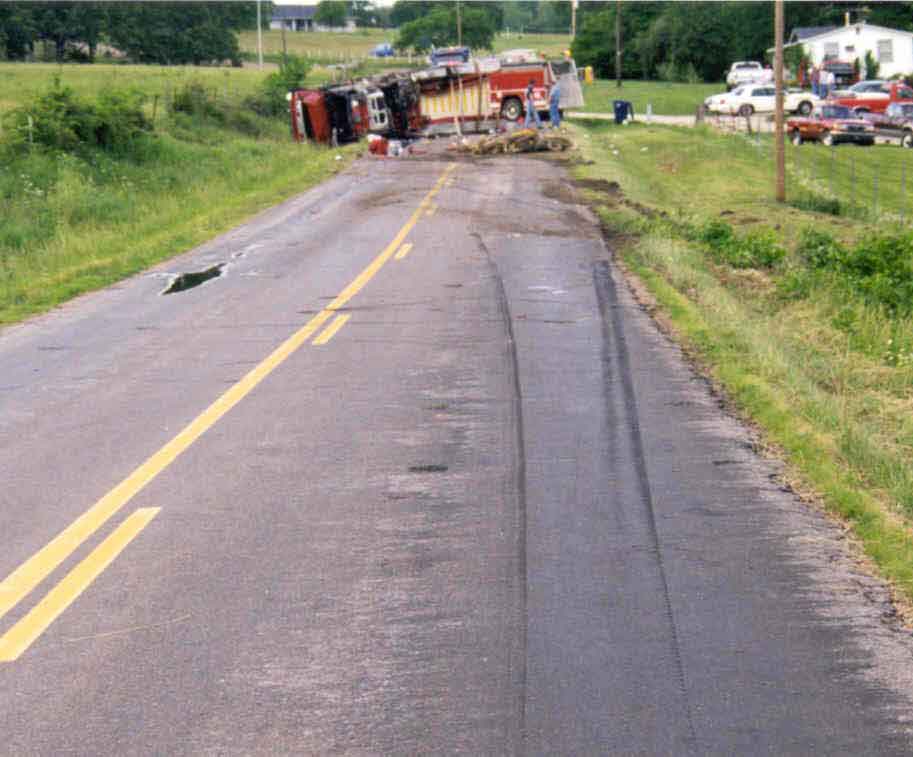 On May 27, 2000, a 27-year-old male volunteer fire fighter died from injuries sustained in a pumper truck rollover that occurred while returning from an unfounded motor-vehicle incident call. On May 30, 2000, the U.S. Fire Administration notified the National Institute for Occupational Safety and Health (NIOSH) of this incident. On June 26-27, 2000, two Safety and Occupational Health Specialists investigated this incident. They conducted interviews with the Chief and members of the fire department involved in the incident, and with members of neighboring fire departments who had responded to provide mutual aid. They obtained copies of photos, police and crash reconstruction reports, and the death certificate. The victim’s training records and the department’s standard operating procedures (SOPs) were reviewed. The incident site and the truck were visited and photographed. The combination fire department involved in this incident had 6 fire stations and served a population of 30,000 in a geographical area of 283 square miles. The combination department is comprised of 1 career Fire Chief and 35 volunteer fire fighters. The engine involved in this incident was a 1987 Chevrolet C-70 truck with dual wheels on the rear axle. The pumper’s tank was manufactured with a 1,000-gallon water tank capacity. Because of repairs for a leaking tank several years prior to this incident, the capacity of the water tank was reduced to 900 gallons. At the time of the incident the water tank was full and equipped with baffles. The gross vehicle weight of the engine with 900 gallons of water is 31,000 lbs. There were no written maintenance records kept by the department for the engine. Weather conditions on the day of the incident were partly cloudy and the roadway was dry. Rain had occurred on the evening prior to the incident, so the earthen embankment was soft. The victim had a basic and current Class F driver’s license. The state does not require a commercial driver’s license for persons operating emergency vehicles or apparatus. The victim was not wearing his seat belt, however, the department did have a written policy which required the use of seat belts. The road on which the engine was traveling was a two-lane, asphalt state road, marked with a double solid-yellow center line and white fog lines. The road measured approximately 20 feet wide and there are no shoulders in the area of the collision. The road had a posted speed limit of 55 mph. The State of Missouri has no mandatory requirements to become a fire fighter. The victim had completed approximately 50 hours of various State fire and rescue training courses, and had completed a 12-hour emergency response driving course offered through the State in 1997. The department does have written qualifications to become a qualified driver. Prior to being eligible to be a driver for the department, a fire fighter must complete a 6-month probationary period. The requirements for driving the engine include taking a verbal quiz, having a practical evaluation on pump operations and filling, and demonstrating driving skills to a department officer. The required hours of drive time vary according to the type of apparatus. The engine required 1 hour of drive time with an department officer. At the time of the investigation, training records of instruction offered through the department were not maintained. The victim had 5 years experience with the department, 4½ of those years as a qualified driver.

The death certificate lists the cause of death as cerebral laceration, due to an open skull fracture.

Recommendation #1: Fire departments should ensure all drivers of fire department vehicles are responsible for the safe and prudent operation of the vehicle under all conditions.1

Discussion: Fire departments should ensure drivers of fire service vehicles are familiar with the potential hazards/conditions that exist on the roadways (e.g., insufficient shoulder) on which they may be traveling. In this incident, the speed of the engine when it left the roadway was estimated to be under the posted 55 mph speed limit, however, for unknown reasons the engine drifted off the roadway. The potential motor vehicle hazards that existed on the roadway of this incident included (1) the earthen embankment being soft, (2) no shoulders, and (3) a large hole that was created by erosion at the end of a drainage culvert.

Recommendation #2: Fire departments should enforce standard operating procedures (SOPs) on the use of seat belts in all emergency vehicles.2

Discussion: Fire departments should enforce SOPs on the use of seat belts. The SOPs should apply to all persons riding in all emergency vehicles and state that all persons should be seated and secured in an approved riding position anytime the vehicle is in motion. The department did have written SOPs addressing emergency and non-emergency response driving, which required that seat belts be worn at all times.

Discussion: Driver training should be provided to all driver/operators as often as necessary to meet the requirements of NFPA 1451, but not less than twice a year. This training should be documented and cover defensive driving techniques during emergency and non-emergency conditions. The department did have written requirements to become a certified driver, however, did not retain any type of documentation to reflect the training offered through the department. The department required drivers to receive driver certification training only one time during their tenure with the department. Additionally, fire departments’ driver training should be in accordance with NFPA 1451, Standard for a Fire Service Vehicle Operations Training Program and NFPA 1002, Fire Apparatus Driver/Operator Professional Qualifications. These standards state that departments should establish and maintain a driver training education program and each member should be provided driver training not less than twice a year. During this training, each driver should operate the vehicle and perform tasks that the driver/operator is expected to encounter during normal operations, to ensure the vehicle is safely operated in compliance with all applicable state and local laws. 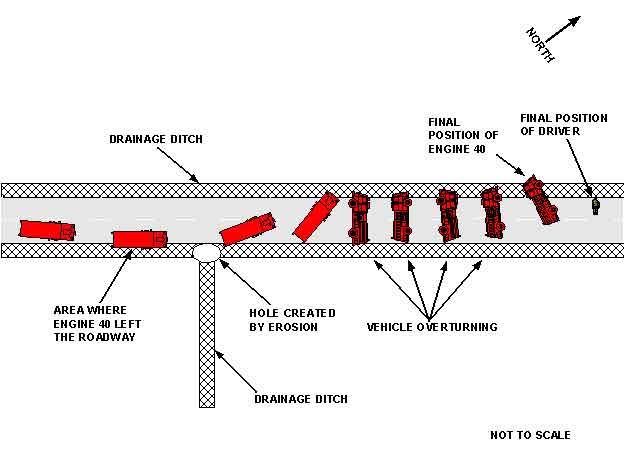 Diagram. Aerial View of Incident Site; diagram indicates the locations of the two drainage ditches, the
hole created by erosion, the final position of the driver, and the various positions of Engine 40 including
the approximate location of where it left the roadway, where it overturned, and its final position. 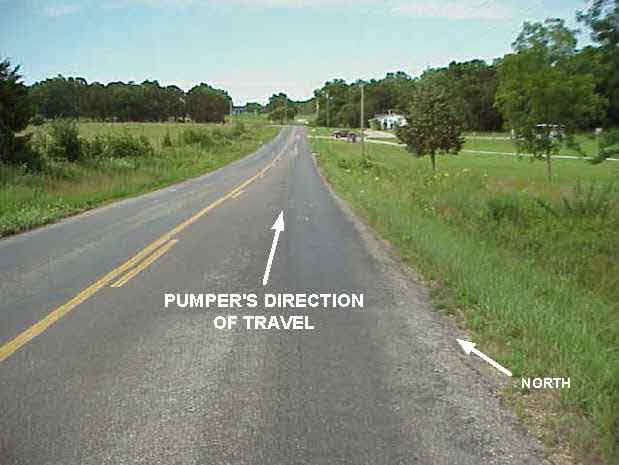 Photo 1. View of Road Traveling Northbound Where Pumper Truck Veered Off Road and Rolled Over 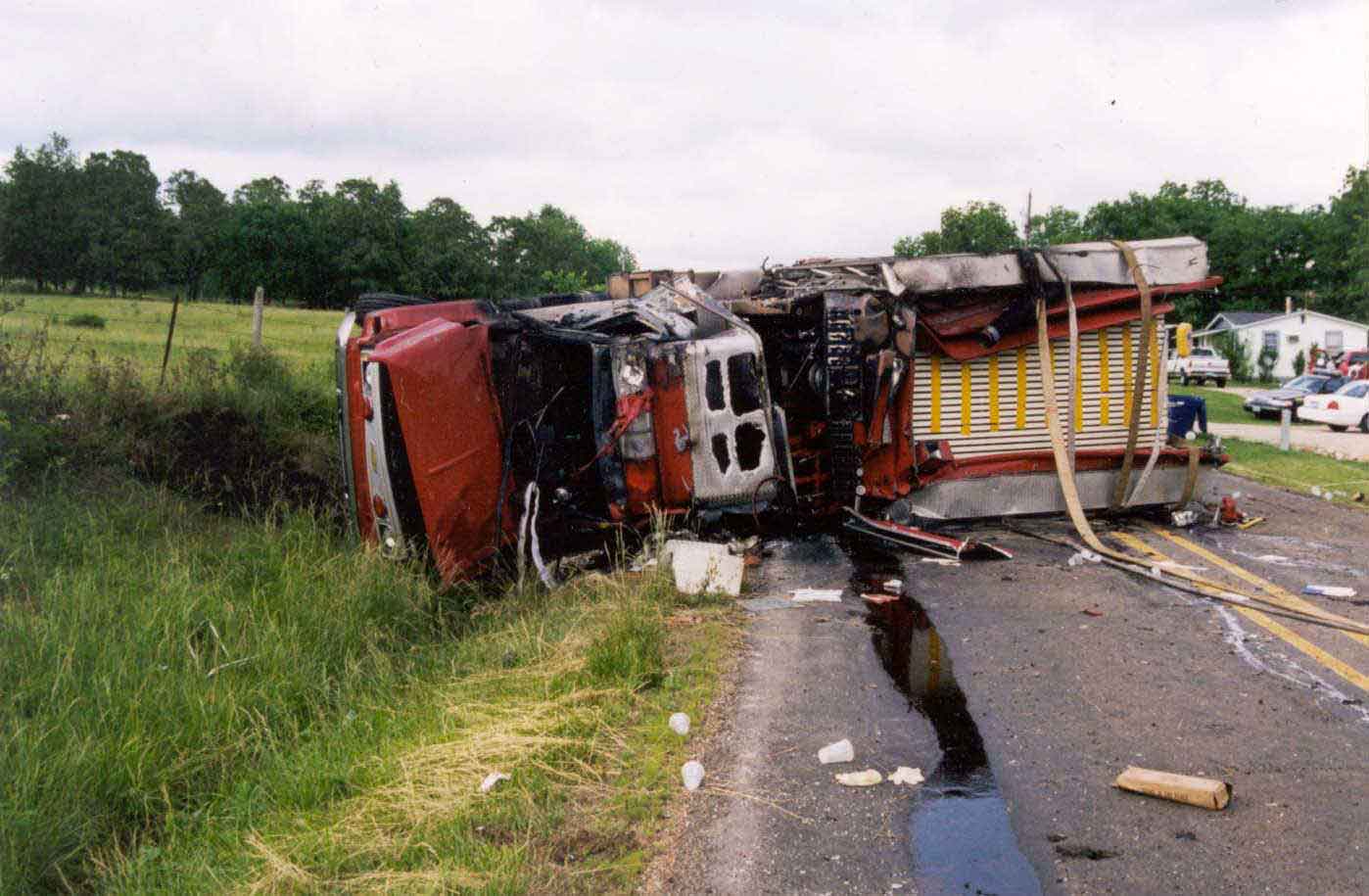 Photo 2. Photograph showing a close-up view of Engine 40 shortly after the incident occurred;
photograph shows the top of the engine, lying on the driver’s side. 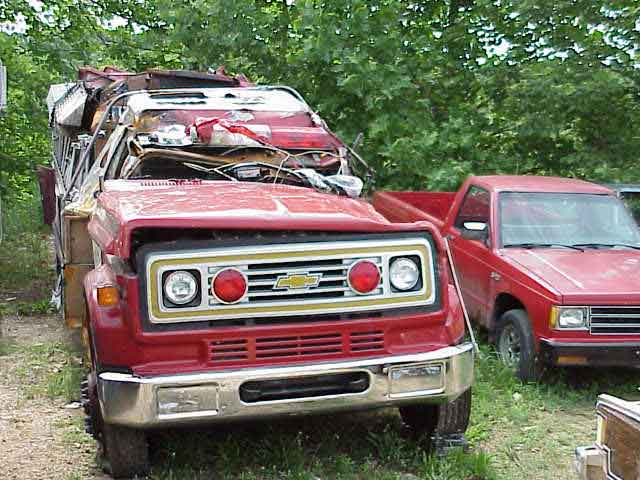