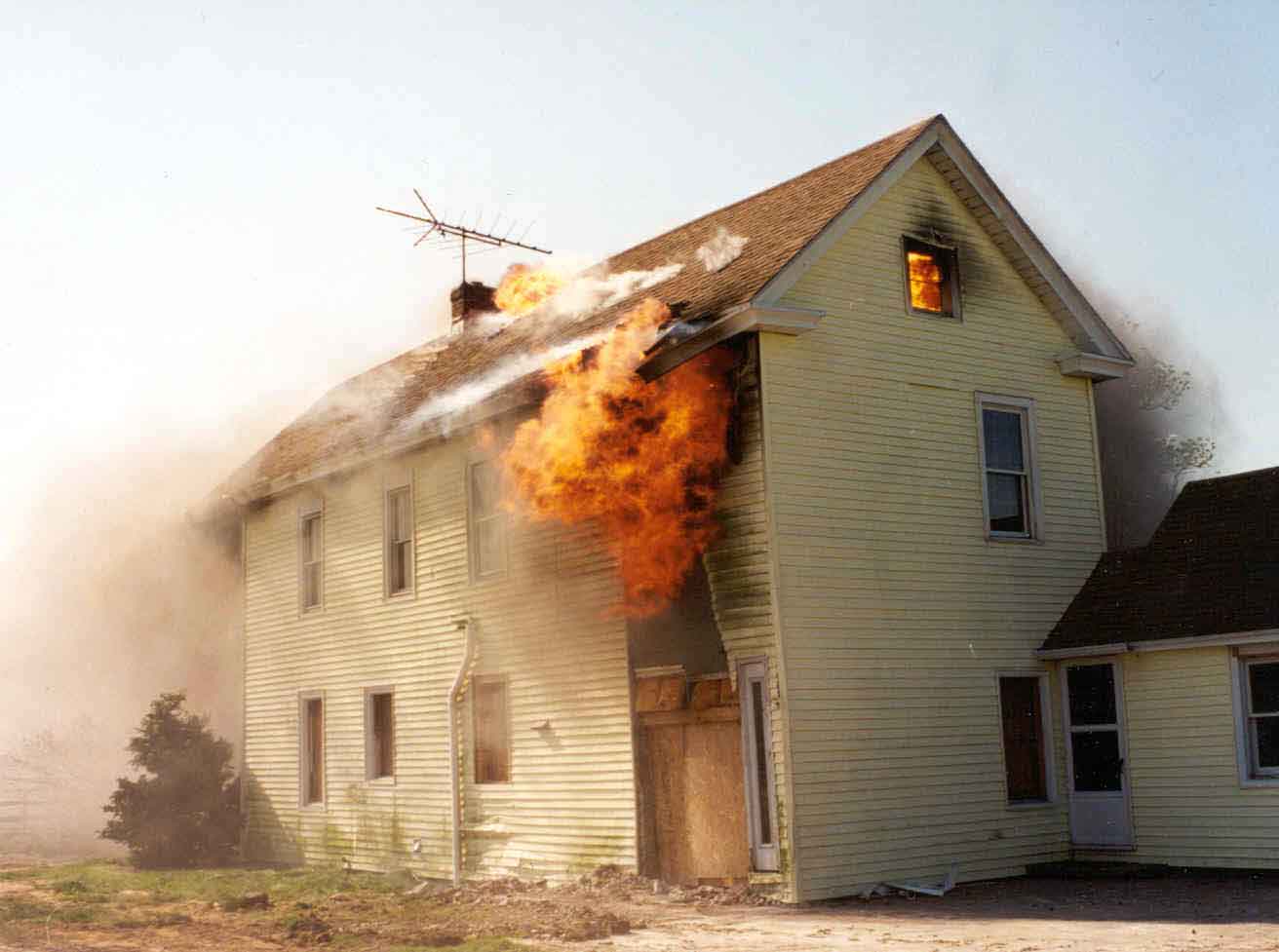 On April 30, 2000, a 27-year-old, male volunteer Assistant Chief (the victim) died while performing a controlled-burn training evolution. The victim and three other fire fighters entered the attic of a 2½-story farm house to perform the last training evolution. The victim and fire fighters ignited the attic and the victim failed to exit. The National Institute for Occupational Safety and Health (NIOSH) was notified of this incident on May 1, 2000, by the United States Fire Administration. On June 5-6, 2000, two safety and occupational health specialists investigated this incident. Meetings were conducted with the State Fire Marshal’s Office, a representative from the National Volunteer Fire Council, and the Chief and fire fighters from the volunteer fire department. Investigators obtained a copy of the department’s standard operating procedures (SOPs), the victim’s training records, department training guidelines, state burn regulations, the victim’s death certificate, and drawings and photographs of the incident scene. The department’s SOPs were reviewed and appeared to be sufficient. A site visit was also conducted by the investigators. The fire department involved in the incident serves a population of approximately 10,000 in a geographical area of 64 square miles. The department is comprised of 50 fire fighters and 5 ambulance personnel which respond out of one station. The fire department places all new fire fighters on probation until they complete the Delaware State Fire School courses entitled Basic Fire Fighting Skills (24 hours) and Vehicle Rescue Course (24 hours). Before completion of the fire fighters’ second year of membership, they must complete Structural Fire Fighting Skills (24 hours), Hazardous Materials Response Skills (24 hours), and complete a department orientation with the Fire Chief or department training officer. Annual refresher training is provided by the department. The victim’s training records were reviewed and appeared to be sufficient. The victim had 6 years of combined experience as an Assistant Chief and fire fighter.

On April 16, 2000, the volunteer Fire Chief met with the owner of a 2½-story farm house to discuss the possibilities of completing a controlled-burn training evolution involving the house. Following their discussion, the owner of the farm house granted the volunteer Chief permission to burn the structure and complete the training. On the same day, the Chief completed a structural evaluation to determine the structure’s stability, did an interior walk through to determine the combustibles, and set up a date to complete the burn. The Chief stated that the farm house appeared to be structurally sound and was nearly empty during his evaluation. The Fire Chief applied for a state burn permit, which was approved.

On April 30, 2000, the volunteer fire department prepared to complete a controlled-burn training evolution. At 0700 hours, the following volunteer fire fighters gathered at the station to discuss their plan of action: the Chief, Assistant Chief (the victim), Captain, Second Rescue Lieutenant, Chief Engineer, Third Assistant Chief Engineer, and four fire fighters. The Chief informed the fire fighters that they would be setting up water curtains (a stream of water projected through a pipe to cool exposures), laying hoselines, completing four live burn evolutions (training exercises) using gasoline-powered chain saws that a sales representative was providing, and then burning the rest of the structure from top to bottom to complete the training. After the briefing, fire fighters responded to the burn site in two of the department’s engines (Engine 3 and Engine 4), their tanker truck, and by personal vehicles. All of the fire fighters and a sales representative (also a volunteer fire fighter from a mutual-aid company) arrived on the scene at 0730 hours and began setup. They laid out four water curtains to protect existing trees and the driveway, laid out hoselines to supply the water curtains, and laid out two additional 1¾-inch hoselines (one was to be used in the training and the other was to protect the northwest exposure when they completed the final burn [see Diagram 1]). Upon completing the setup, the Chief ordered all fire fighters to walk through the house on their own to familiarize themselves with the layout and design.

The death certificate listed the cause of death as asphyxiation and thermal burns. The victim’s carbon monoxide level was listed at 41%. NOTE: Because of several factors-the length of time the victim was exposed to heat and fire, the collapsed debris, and the severity of the damage to the SCBA-it is unclear if the victim’s SCBA facepiece was removed, SCBA hoselines melted, or if the SCBA malfunctioned. Due to the condition of the SCBA unit, no further evaluation could be completed. The SCBA was new and the victim had been using it prior to this incident. No problems with the SCBA were reported by the victim in the past or throughout the entire training operation.

Recommendation #1: Fire departments should ensure that flammable or combustible liquids as defined in NFPA 30 not be used in live fire training.1, 2

The National Fire Protection Association standard 1403, 2-3.3, notes that the use of flammable or combustible liquids, as defined in NFPA 30, shall not be permitted for use in live fire training evolutions in acquired structures. Additionally, the NFPA notes that fuel materials shall be used only in the amounts necessary to create the desired fire size. Pressure-treated wood, rubber, plastic, and straw or hay treated with pesticides or harmful chemicals shall not be permitted to be used. The fuel load shall be limited to avoid conditions that could cause an uncontrolled flashover or backdraft.

Recommendation #2: Fire departments should ensure that proper ventilation is in place before a controlled burn takes place.2

The Delaware Fire Prevention Commission regulation 3-3.3 regarding live fire training states that adequate ventilation openings shall be made in the roof. Regulation 3-3.4 also notes that roof ventilation openings that are normally closed, but can be opened in the event of an emergency, may be utilized. These may consist of panels or hinged covers. Proper ventilation should be in place before ignition occurs to release heat and gases that can build up and possibly cause a flashover or backdraft.

Recommendation #3: Fire departments should ensure that fires not be ignited in any designated path of exit. 1

The National Fire Protection Association standard 1403, 2-4.15, notes that fires shall not be ignited in any designated exit paths. In the event that the ignition officer or other fire fighters would need to exit, the path should be clear of any debris, obstacles, or fire.

Recommendation #4: Fire departments should ensure that an evacuation signal is communicated to all fire fighters prior to ignition.1, 2

Recommendation #5: Fire departments should ensure that a building evacuation plan is in place and all fire fighters are familiar with the plan.1, 2

The National Fire Protection Association standard 1403, 2-4.10, and the Delaware Fire Prevention regulation 3-7.3 notes that a building evacuation plan shall be established and fire fighters should conduct a walk-through to familiarize themselves with the structure. In the event that an evacuation takes place, fire fighters should have knowledge of all exits and a predetermined location to meet for a roll call.

Recommendation #6: Fire departments should ensure that a method of fireground communication is established to enable coordination among the incident commander and fire fighters.1

Recommendation #7: Fire departments should ensure that a safety officer be appointed for all live fire training.1, 2

Recommendation #8: Fire departments should ensure that each fire fighter be equipped with full protective clothing and a SCBA.1, 2

Each participant in a training evolution should be equipped with full protective clothing and self-contained breathing apparatus. All participants should be inspected by the safety officer prior to entry into a live fire training evolution to ensure that the protective clothing and SCBA are being worn properly and are in serviceable condition. Although it is recommended that all fire fighters involved in live fire training evolutions be equipped with full protective equipment and a SCBA, fire fighters must still evaluate conditions at all times and beware of the possibilities that the protective equipment can give a false impression of temperatures and conditions.

Recommendation #9: Fire departments should ensure that backup personnel are standing by with equipment, ready to provide assistance or rescue.1, 2

Backup personnel, trained and equipped, should be on the scene of a live fire training evolution in case an emergency would occur. The backup personnel, also known as a rapid intervention team or crew, should stand by with a backup hoseline and other necessary equipment to ensure adequate protection for personnel on training attack lines. The backup hoseline should be long enough to reach any interior component of the structure.

Recommendation #10: Fire departments should ensure that only one person be assigned as the “ignition officer” and it not be a fire fighter participating in the training.1

The National Fire Protection Association standard 1403, 2-4.24, notes that one person shall be designated as the “ignition officer” to control the materials being burned and the ignition officer shall not be a fire fighter participating in the training.

Recommendation #11: Fire departments should ensure that exterior fire attack is at a minimum during search and rescue.3

Recommendation #12: Fire departments should ensure that fire fighters who enter a hazardous condition enter as a team of two or more.4

The National Fire Protection Association (NFPA) recommends that four persons (two in and two out), each with protective clothing and respiratory protection, is the minimum number essential for the safety of those performing work inside a structure. The team members should be in communication with each other through visual, audible, or electronic means to coordinate all activities and to determine if emergency rescue is needed. Also, the recently promulgated standard by the Occupational Safety and Health Administration (29 CFR 1910.134) states that when two or more workers enter an immediately dangerous to life and health (IDLH) atmosphere, such as the atmosphere commonly found in structural fire fighting, two will remain on the outside and maintain visual or voice contact to assist in emergency rescue activities. 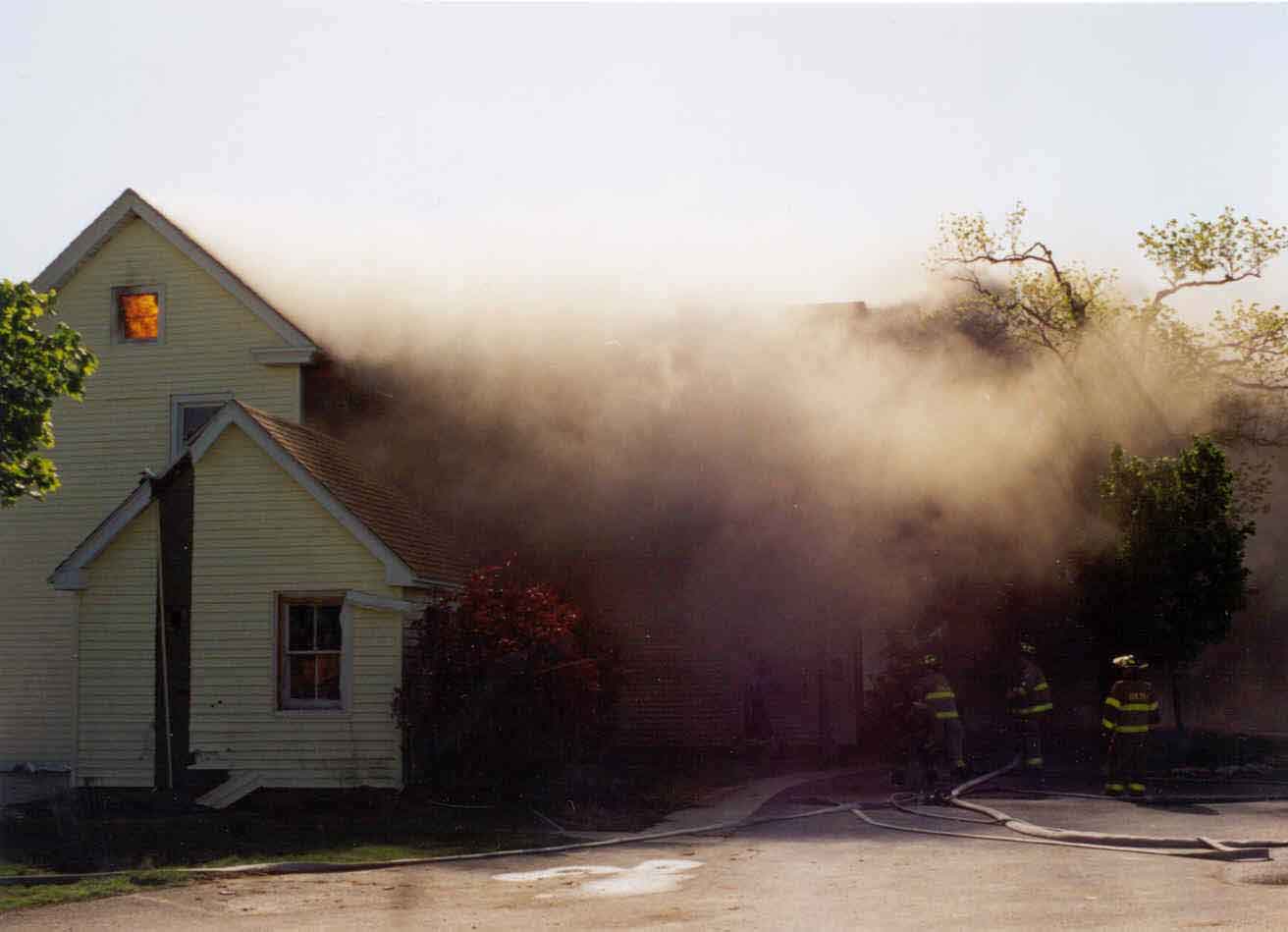 Photo. Structure Involved in This Incident 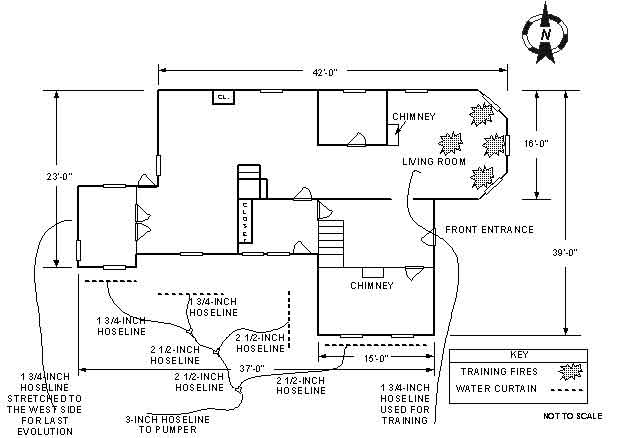 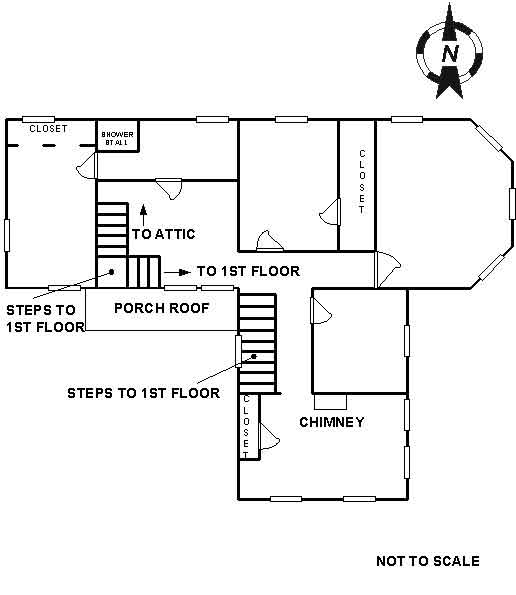 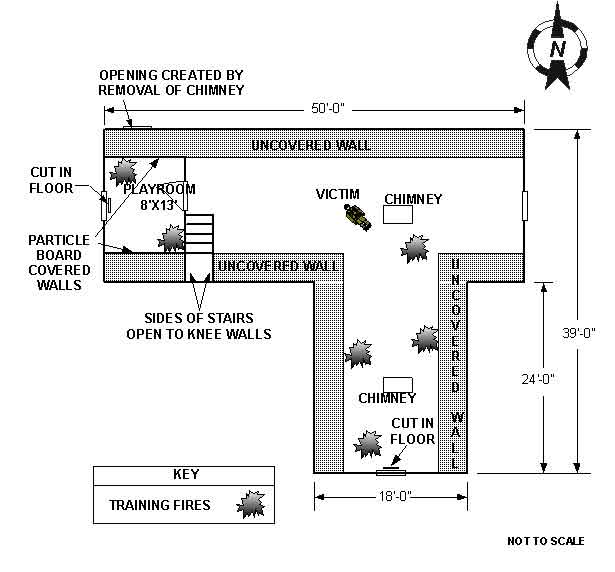