On January 17, 2000, a 47-year-old male volunteer Fire Chief (the victim) died after he lost control of the truck he was driving, and the truck rolled three times and came to rest on an embankment. At 1512 hours, the volunteer fire department was dispatched for mutual aid to a working structure fire. At 1523 hours, the victim notified Dispatch that Truck 960 was en route to the scene. The victim lost control of the truck as he approached a slight curve in the roadway. The truck began to skid, and the right tires traveled onto the shoulder. Continuing on the shoulder, the truck entered a ditch, became airborne, crossed a lane on a side street, and struck a center median (see Photo 1). The truck crossed a second lane on a side street, struck a guardrail, and flipped end over end until it landed in a concrete culvert (see Diagram). The victim was killed instantly. NIOSH investigators concluded that, to minimize the risk of similar occurrences, fire departments should

On January 17, 2000, a male volunteer Fire Chief (victim) was responding as mutual aid to a structure fire when he lost control of the truck he was driving, rolled several times, and landed in a concrete culvert. The victim was killed instantly. On January 20, 2000, the U.S. Fire Administration notified the National Institute for Occupational Safety and Health (NIOSH) of this incident. On February 22-23, 2000, two Safety and Occupational Health Specialists from the NIOSH Fire Fighter Fatality Investigation and Prevention Program and a motor-vehicle reconstructionist investigated this incident. Interviews were conducted with the Assistant Chief of the department, the mutual-aid department who conducted the extrication, and the State Highway Patrol. Copies of the field sketches, the State Highway Patrol report, the department’s standard operating procedures (SOPs), and the death certificate were obtained. At the time of the investigation the victim’s training records were not available for review. The incident site and the truck were visited and photographed.

The volunteer fire department involved in this incident serves a population of 696 in a geographical area of 75 square miles and is comprised of 21 volunteer fire fighters. The truck involved in this incident was a 1969 Chevrolet C-50 truck with dual wheels on the rear axle. The standard pickup bed was converted and a handmade water tank was attached. The T-shaped tank was made of steel and had a 641-gallon capacity. It was not equipped with baffles, and it was full at the time of the incident. The gross vehicle weight of the truck was 18,000 lbs including the 5,320 lbs of water. The truck was purchased by this department as an aftermarket truck in 1986. At the time of the investigation, the department did not have any written maintenance records for the truck.

On the day of the incident, weather conditions were cloudy with misty rain. This was the first rain the area had received in approximately 2 months, causing the road surface to become slick due to the moisture from the rain mixing with oil and grease on the highway.

The road on which the truck was traveling was a two-lane, asphalt state road marked with a solid double-center yellow line and white fog lines. The road is classified as a right curve with a 1-degree grade (see Diagram and Photo 2). It had asphalt shoulders on both sides of the pavement, and they sloped into ditches. The road measures approximately 24 feet wide. The eastbound and westbound lanes were approximately 11 feet wide with the remaining 2 feet between the center lines. The road had a posted speed limit of 55 mph with a posted cautionary speed of 50 mph at the curve.

The State requires that all fire fighters complete training equivalent to the National Fire Protection Association (NFPA) Level I. The victim completed NFPA Level I training through the State of Missouri. The department does not have written qualifications to become a qualified driver; however, they require drivers to demonstrate their driving skills to a department officer before being qualified to drive an apparatus. The victim had 12 year’s experience with this department, including 3 years as Chief. The victim was the primary driver of the truck involved in this incident, having driven it more than 8 years.

On January 17, 2000, at 1512 hours, the volunteer fire department was dispatched to provide mutual aid at a working structure fire. The Fire Chief (victim) notified Dispatch at 1523 hours that Truck 960 was en route to the scene. The Assistant Chief and four other volunteer fire fighters responded to the incident in privately owned vehicles (POVs). The victim, driving with code three priority (lights and sirens), was traveling in the westbound lane of a two-lane state highway and approached a curve in the road (see Diagram and Photo 2). The State Highway Patrol estimated the truck was traveling approximately 58 mph. According to witness statements and evidence collected by the State Highway Patrol and the motor-vehicle reconstructionist, as the victim approached the curve, the truck began to cross the center line. As the victim steered the truck back into the westbound lane, it began a sideways skid. The truck’s right front tires left the lane and continued onto the shoulder in a sideways direction. The truck started rotating in a clockwise direction. Continuing to rotate, it traveled through a ditch and became airborne, landed on a side street, struck a cement median in a backwards direction and struck a street sign (see Photo 1). The truck then crossed a second lane on the side street. The right rear corner of the truck struck a guardrail and flipped end over end until it landed on its cab in a concrete culvert (see Diagram and Photo 3). The truck rolled one- half to three-quarters times before coming to rest. The victim was killed instantly.

At 1530 hours, a witness notified Central Dispatch of the incident. Between 1530 and 1532 hours, the State Highway Patrol and an ambulance were dispatched to the scene. Two fire departments (including the one the victim belonged to) were rerouted from the structure fire to the incident. At 1535 hours, the ambulance arrived on the scene and the driver assessed the victim’s condition. The victim had severe head injuries and did not have a pulse. A third fire department was dispatched to the scene to help extricate the victim. Spreaders were used to open the door on the driver’s side and approximately 1½ hours later, the victim was removed from the vehicle. He was pronounced dead at the scene by the Coroner.

The death certificate lists the cause of death as massive neck trauma and upper chest trauma.

Recommendation #1: Fire departments should ensure all apparatus are kept under a maintenance schedule which is documented.1

Discussion: Maintenance schedules should be established and recorded as an integral part of a well-planned maintenance program. The maintenance program should include daily, weekly, and periodic maintenance service checks. The daily maintenance check should follow the manufacturer’s handbook and should include items such as oil level, coolant level, batteries, visible and audible warning signals, fuel levels, and tires for cuts and proper inflation. Additionally, maintenance checks should include a visual inspection of all safety equipment such as seat belts. This truck did not have a seat belt installed on the driver’s side. The seat belt had been removed and the holes in which the seat belt bracket had been mounted were visible. If deficiencies are found during maintenance checks, the apparatus should be removed from service until deficiencies are corrected. At the time of the investigation, it was determined that the rear tires on the truck were in very poor condition. This is significant as the evidence suggests that the vehicle lost traction on the wet road and entered an uncontrollable skid. Tires with proper tread, depth, and inflation may have reduced the possibility of this incident occurring.

Recommendation #2: Fire departments should ensure all apparatus equipped with water tanks are provided with baffles to control the water’s movement.2

Recommendation #3: Fire departments should establish, implement, and enforce standard operating procedures (SOPs) on the use of seat belts in all emergency vehicles.3

Recommendation #4: Fire departments should ensure that all drivers of fire department vehicles are responsible for the safe and prudent operation of the vehicles under all conditions.4

Discussion: Fire departments should ensure driver/operators of fire service vehicles are responsible for the safe and prudent operation of the vehicles under all conditions. The State allows emergency vehicles responding to an incident to exceed the maximum speed limit if the driver does not endanger life or property. Additionally, when hazardous weather conditions and roadways are present, drivers should always maintain safe speeds to avoid losing control of their vehicles.

Recommendation #5: Fire departments should ensure all drivers of fire department vehicles receive driver training at least twice a year and document the training.5, 6

Discussion: Driver training should be provided to all driver/operators as often as necessary to meet the requirements of NFPA 1451, but not less than twice a year. This training should cover defensive driving techniques during emergency and non-emergency conditions. The department did not have written requirements for becoming a certified driver. At the time of the investigation, the victim’s training records were not available for review. Additionally, fire department driver training should be in accordance with NFPA 1451, Standard for a Fire Service Vehicle Operations Training Program and NFPA 1002, Fire Apparatus Driver/Operator Professional Qualifications. These standards state that departments should establish and maintain a driver training education program and each member should be provided driver training not less than twice a year. During this training, each driver should operate the vehicle and perform tasks that the driver/operator is expected to encounter during normal operations to ensure the vehicle is safely operated in compliance with all applicable state and local laws. 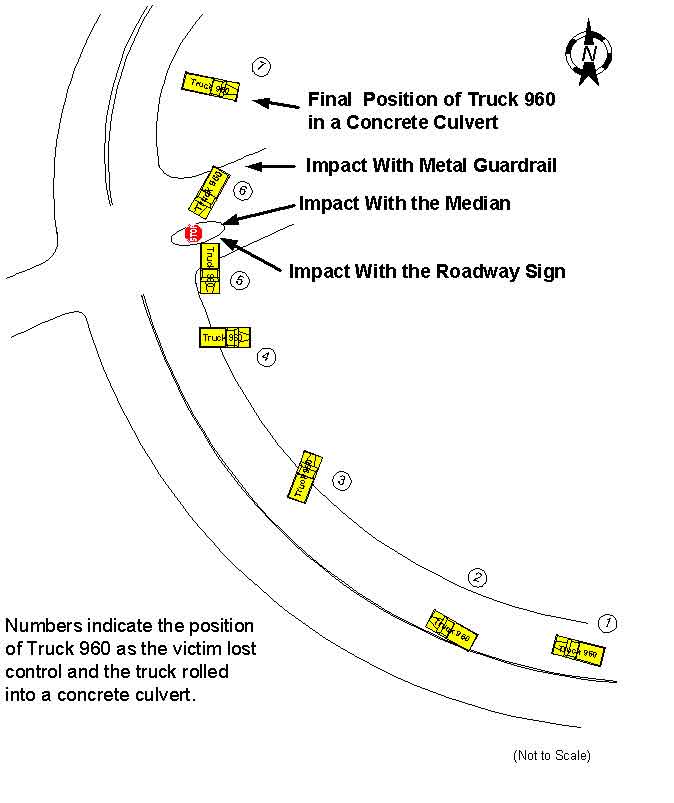 Diagram. Overview of Incident Site. Diagram depicting the overview of the incident site; diagram shows seven
approximate positions of Truck 960, including its impact with the roadway sign, impact with the median, impact
with themetal guardrail, and the final position in the concrete culvert. 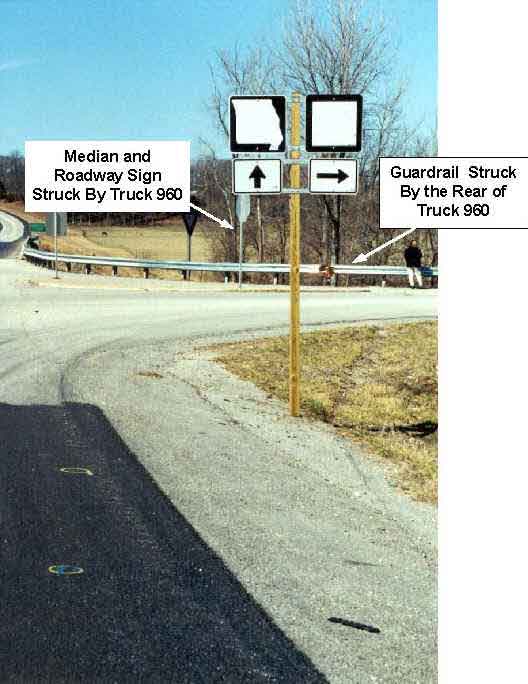 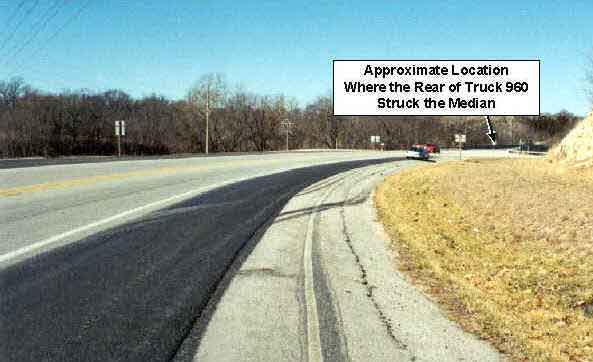 Photo 2. The Curve on the Road Where the Victim was Traveling. Photograph indicates the
approximate location where the rear of Truck 960 struck the median. 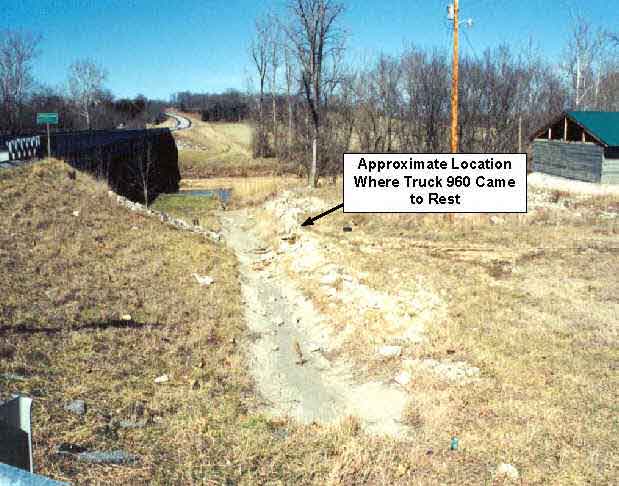