On January 27, 2000, a 74-year-old male volunteer fire fighter (victim) died while fighting a structure fire. At approximately 1316 hours, Central Dispatch notified the volunteer department of smoke in a residence. The Assistant Chief was first to arrive on the scene and confirmed to Central Dispatch that they had a working fire venting out of the roof. He assumed duties as the Incident Commander (IC) until the arrival of the Chief, who took command. The Assistant Chief confirmed to the Chief that they had fire and heavy smoke, and he reported that no one was inside the house. The first engine to arrive on the scene was Engine 608 with a Captain (the victim), two fire fighters (Fire Fighters #1 and #2), and a chauffeur/engine operator. Engine 608 was positioned on the east side of the structure (see Figure), and the victim and two fire fighters pulled a 200-foot, 1 3/4-inch cross lay from the Engine and advanced toward the structure. The victim took the nozzle, and Fire Fighters #1 and #2 followed as backup, and they entered the structure to perform an aggressive interior suppression attack. As the victim applied water to the fire, the two fire fighters went to the door to pull more hose line so that the victim could advance the line deeper into the structure. As the fire fighters were feeding the victim additional line, they felt the hose line drop. The two fire fighters reported to the Chief, who then ordered the Assistant Chief to form a Rapid Intervention Team (RIT) to perform a search and rescue operation. The RIT made four entries into the structure before successfully removing the victim.

NIOSH investigators concluded that to minimize the risk of similar occurrences, fire departments should

On January 27, 2000, a 74-year-old male volunteer fire fighter responded to a structure fire at a local residence. The fire was started when lightning struck the house during a rain storm. The victim, a chauffeur/engine operator, and two fire fighters responded in Engine 608 and were the first engine company to arrive on the scene. They proceeded with an aggressive interior suppression attack. The victim, who served as the nozzle man, was caught in a thermal heat column and died from smoke inhalation. The victim was removed from the structure approximately 21 minutes after he arrived on the scene. On January 31, 2000, the United States Fire Administration notified the National Institute for Occupational Safety and Health (NIOSH) of the incident. On February 2-3, 2000, two Safety and Occupational Health Specialists from the NIOSH, Division of Safety Research, investigated the incident. Interviews were conducted with the Chief, the Assistant Chief, and other members of the department who were at the fire scene. The incident site was visited, and photographs were obtained. Copies of witness statements, training records, standard operating procedures (SOPs), autopsy results, and a map of the fire scene were obtained. An inspection of the victim’s turnout gear and self contained breathing apparatus (SCBA) was conducted. The volunteer department consists of one station and 30 uniformed fire fighters. The department serves a population of 6,500 in a geographical area of 101 square miles. At the time of the incident the victim was wearing full bunker gear including SCBA.

The incident occurred at a local residence approximately 4 miles from the fire station. The structure in which the incident occurred was a one-story, wood-frame house with an attic. The structure measured 48 feet in length by 40 feet in width. The engine in which the victim was riding was the first engine to arrive on the scene. The weather conditions that affected this fire included a relative humidity of 88%, an ambient air temperature of 62″F, and a wind speed of 12 m.p.h., with gusts of up to 40 m.p.h.

At approximately 1318 hours, the Assistant Chief arrived on the scene by privately owned vehicle (POV), assumed Incident Command (IC), and completed a scene size-up. He reported the following conditions to Central Dispatch: fire venting through the roof of a one-story residential structure, with heavy, dark gray to brown smoke coming through the cracks in the roof and through the dormers. At approximately 1320 hours the Chief arrived on the scene, and assuming duties as the Incident Commander, confirmed a working structure fire to Central Dispatch. Note: No ventilation operations were performed during this operation. At this time, Engine 608 with a full crew consisting of a Captain (the victim), a chauffeur/engine operator, and two fire fighters (Fire Fighter #1 and Fire Fighter #2) left the station, and while en route, received an updated report from Central Dispatch confirming a working fire. Engine 608 was first to arrive on the scene at 1324 hours and was positioned on the east corner of the structure (see Figure). Upon arrival all fire fighters were wearing full turnout gear, SCBA, and a manual Personal Alert Safety System Device (PASS). As the fire fighters exited the apparatus they gave their accountability tags to the chauffeur/engine operator. At this time Trucks 606 and 605 also arrived on the scene, approximately 1 minute before an engine from a neighboring town arrived as a mutual-aid pumper company.

According to results revealed in the autopsy, the cause of death was listed as smoke inhalation.

Recommendation #1: Fire departments should ensure that the department’s Standard Operating Procedures (SOPs) are in place and refresher training is provided.1

Discussion: “Written SOPs are only effective if they are used. A SOP that management does not enforce isn’t a true SOP. An official SOP is one that is sanctioned by the department, as demonstrated by a written general order from the Fire chief establishing or enacting it. An SOP becomes official only after every member has been notified of it in writing.”1

Officers should keep in contact, physically or verbally, with their crews at all times while performing fire ground operations.1

Members operating in a hazardous environment (one which requires the use of SCBA or where a member could become trapped, lost, or injured by the environment) should maintain company or crew integrity and shall use the buddy system. This requires that

1. Company or crew members enter and exit the environment together.

2. Members remain within either sight, voice, or tactile distance of each other while they are within the environment. No one should ever be left alone.

3. Incident Commanders and sector officers shall not direct members to operate independently of their companies or crews.

4. Task assignments should be made through the company officer or crew leader.

Fire fighters should be equipped with a PASS device and it should be activated during fire fighting operations.1

Recommendation #2: Fire departments should ensure that a Rapid Intervention Team is established and in position immediately upon arrival.2

Discussion: A Rapid Intervention Team (RIT) should respond to every major fire. The team should report to the officer in command and remain at the command post until an intervention is required to rescue a fire fighter(s). The RIT should have all tools necessary to complete the job, e.g., a search rope, first-aid kit, and a resuscitator to use if a fire fighter becomes injured. Many fire fighters who die from smoke inhalation, from a flashover, or from being caught or trapped by fire actually become disoriented first. They are lost in smoke and their SCBA runs out of air, or they cannot find their way out through the smoke, become trapped, and then fire or smoke kills them. The primary contributing factor, however, is disorientation. The RIT will be ordered by the IC to complete any emergency searches or rescues. It will provide the suppression companies the opportunity to regroup and take a roll call instead of performing rescue operations. When the RIT enters to search and rescue, they should have full cylinders on their SCBAs and be physically prepared. When a RIT is used in an emergency situation, an additional RIT should be put into place in case an additional emergency situation arises. This additional RIT should be comprised of fresh, well-rested fire fighters. In this incident, the Chief ordered the Assistant Chief to form a RIT and enter the structure to perform a search-and-rescue operation. To enter the structure, the Assistant Chief had to finish gearing up and find two additional fire fighters who where wearing their full array of personal protective equipment and clothing. The Assistant Chief served as a member on both of the Rapid Intervention Teams that entered the structure.

Recommendation #3: Fire departments should ensure that fire fighters from the ventilation crew and the attack crew coordinate their efforts.3, 4

Discussion: Fire can quickly spread upward into the structure, causing potential problems such as a flashover, a backdraft, or a weakened structure. Ventilation timing is extremely important and must be carefully coordinated between both fire attack and ventilation crews. Ideally, ventilation should occur just prior to interior crews advancing their hose lines. Proper venting of heat and smoke from buildings can reduce the possibility of dangerous situations that confront fire fighters. The fire fighters performing ventilation tasks should be in communication with the fire fighters attacking the fire or entering the structure to coordinate their efforts. In this incident no ventilation was performed on the fire ground. Had proper ventilation taken place, the amount of heat and smoke trapped inside the structure could have been reduced. Ventilation could have decreased heat and smoke and potentially have affected the outcome of events. This reduction in heat and smoke would have aided in the rescue efforts. Because of the heat, the Rapid Intervention Teams had to make three attempts before successfully gaining access to the structure, wasting valuable time. 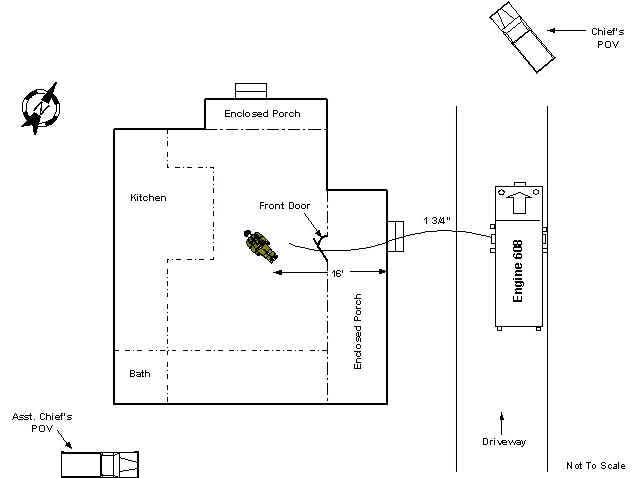