On January 17, 2000, a 53-year-old male volunteer fire fighter (the victim) died after the extension ladder he was descending slipped out from under him while he was performing maintenance work on the previous day (January 16, 2000). The victim had been working on replacing a garage door opener in the middle bay of the fire station before the incident occurred. Access to the door opener was gained by placing a 14-foot fireground aluminum extension ladder against the side of a fire rescue truck (see Figure 1), climbing the ladder to the roof of the fire rescue truck, and then accessing the garage door opener. The victim had removed the existing door opener and was in the process of going to assist in getting the new door opener ready for installation. While descending the extension ladder, the ladder slipped out from under him and the victim fell headfirst to the concrete floor. Another fire fighter who was assisting the victim in the replacement of the door opener, saw the victim fall and immediately jumped down to the ground from the roof of the rescue truck to assist the victim. He summoned a civilian who was on the ground putting the new opener together to help. The fire fighter who jumped from the roof of the rescue truck ran to a neighboring house to inform the victim’s wife, while the civilian called 911. Within a few minutes paramedics and a police officer arrived on the scene. The victim was intubated and transported via a helicopter to the local hospital where he died the next day of his injuries. NIOSH investigators concluded that, to minimize the risk of similar occurrences, fire departments should

On January 17, 2000, a 53-year-old male volunteer fire fighter (the victim) died after the extension ladder he was descending slipped out from under him while he was performing maintenance work on the previous day (January 16, 2000). On January 19, 2000, the U.S. Fire Administration notified the National Institute for Occupational Safety and Health (NIOSH) of the incident, and on February 1, 2000, the Team Leader from the NIOSH Fire Fighter Fatality Investigation and Prevention Program and a Safety Engineer from NIOSH investigated the incident. The incident was reviewed with the Fire Chief, a volunteer fire fighter (witness) from the Fire Department, a civilian who was helping, and the local Chief of Police. Photographs of the incident site and ladder were taken.

On January 16, 2000, two volunteer fire fighters and a civilian were replacing a garage door opener with a new door opener that would more reliably handle the weight of the 16-foot garage door. The civilian was assembling the new door opener on the ground while the two fire fighters were to remove the old door opener. The door opener was located on the ceiling in the middle bay of the five bay fire station. A 14-foot heavy-duty aluminum fireground extension ladder was leaned against the side of the fire rescue truck to gain access to its roof, which they used as a work platform. The truck was 9 feet, 4 inches high, but the ladder appeared to be extended to only 9 feet, 2 inches. The two fire fighters climbed the ladder to the roof of the fire truck and removed the old garage door opener. Instead of waiting for the new door opener to be handed up, they both decided to go down the ladder to see if they could help the civilian assemble it. At 1432 hours the victim was in the process of descending the ladder when it kicked out and slid to the right, causing the victim to become tangled in the rungs and rope and fall headfirst onto the concrete floor. The fire fighter on the roof of the rescue truck yelled for help and jumped down to see if the victim was alright. The civilian who was assembling the new door opener ran to the victim’s aid and noticed that the he was still breathing and trying to sit up. The fire fighter who had jumped off the truck, ran to get the victim’s wife at a neighboring house while the civilian called 911. The police department and paramedics arrived on the scene within minutes of being notified. Within 30 minutes of the incident, the victim was intubated and was transported via helicopter to the local hospital where he died at 1510 hours on January 17, 2000.

The medical examiner reported the cause of death as blunt force trauma to the head.

Recommendation #1: Fire departments should ensure that ladders are used in accordance with existing safety standards.1

Discussion: Occupational Safety and Health Administration (OSHA) standards require that the base, or feet, of portable metal ladders be placed on a substantial base; that they extend 3 feet above the working surface; and that ladders in use be tied, blocked, or otherwise secured to prevent displacement. Training should be provided and include safe work practices for employees to avoid the risk of being injured or killed while working from ladders. The victim was a volunteer fire fighter and was not covered by OSHA regulation. However, fire departments could use OSHA safety standard 29 CFR 1926.1053 as a source of information and provide training to fire fighters who face the risk of a fall from a ladder. Since this incident happened as part of a maintenance activity inside of a fire station, a conventional extension ladder with safety feet would have been a more appropriate choice than a fireground ladder with butt spurs (see Figure 2).

Recommendation #2: Fire departments should designate an individual as the fire station safety officer for all in-house maintenance to identify potential hazards and ensure that those hazards are eliminated.

Discussion: A safety officer should be designated and be informed of all maintenance activities to be performed in the department. The safety officer then could identify potential hazards, and ensure that those hazards are eliminated before any work is performed.

Recommendation #3: Fire departments should consider the use of mobile scaffolding, personnel lifts, scissor lifts, or boom lifts, instead of the top surface of a fire truck.2,3

Discussion: Scissor lifts and mobile scaffolding are designed to be used as working surfaces. They meet all necessary safety requirements, and they are easily moved from one location to the next. 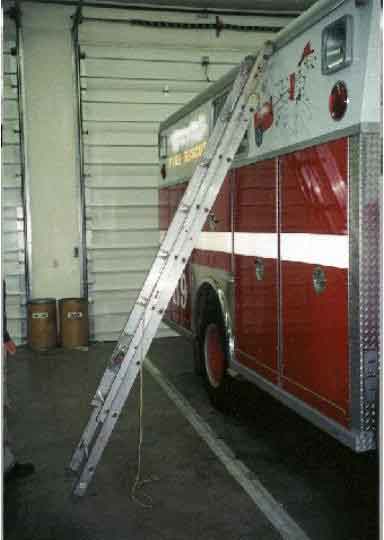 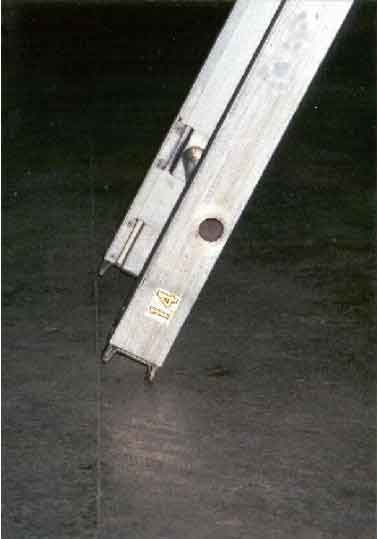