A 62-year old farmer died on June 20, 2001 from injuries received when she was thrown from the farm tractor that she was operating. FACE investigators concluded that to prevent similar occurrences, employers should:

A 62-year old farmer died on June 20, 2001 from injuries received when she was thrown from the tractor that she was operating. The decedent was a widow who had undertaken operation of the family farm less than a year prior to the incident. The farm was located approximately 25 miles from her home. OKFACE investigators reviewed the death certificate, the county sheriff’s report, and newspaper articles on the incident. OKFACE investigators interviewed the county undersheriff, a private citizen who responded to the incident, and a subject matter expert on the tractor involved in the incident.

The woman who died in the incident had been employed as a schoolteacher; however, she became the sole proprietor of the farm following the death of her husband. She had virtually no prior experience operating farm equipment. Although a few persons had offered to plow the field for her, she elected to complete the task herself. At the time of the incident, the victim was operating a farm tractor that was manufactured no later than 1978 and was generally in good operating condition. It was not equipped with a seat belt or a ROPS. OKFACE investigators identified no objective evidence that the farm operation had a formal safety program.

Figure 1. Tractor the Victim was Operating

The temperature at the time of the incident was approximately 80°F. There had been no measurable precipitation for a significant period of time. The decedent’s tractor was equipped with a front-end loader, power take-off and rear three-point hydraulic lift to which a seven-shank plow was attached (Figure 1). She was using the tractor to plow a relatively level but rough field of native grass that had not been recently mowed or plowed. The field was located on the north side of a state highway in full view of vehicles traveling on the road. The decedent had worked the field for an estimated two hours and had plowed to a point approximately 100 yards from the highway when the incident occurred. 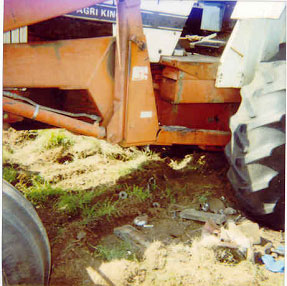 Figure 2. Broken Parts of the Tractor

At approximately 9:15 a.m., a passing motorist saw the tractor “bucking” in a stationary position without an operator at the wheel. He stopped his vehicle, and went into the field to investigate. Upon seeing the victim’s condition, he returned to his car and drove two miles to the nearest convenience store to get help. One store employee called 911 while a second employee drove to the scene. Upon arriving at the scene, the store employee climbed onto the tractor and shut off the power. The county undersheriff arrived at the scene shortly thereafter.

Emergency responders from the nearest city (approximately 25 miles away) arrived at the scene several minutes later, but the tractor operator was deceased. The decedent was removed to a funeral home and was examined there by the Medical Examiner.

The death certificate listed the immediate cause of death as head injury.

Recommendation #1: Employers and employees should always follow safe operating procedures in the operation of tractors and other farm equipment.

Discussion: Although the reason(s) is/are not clear, the decedent lowered the bucket to the ground at an angle that allowed the bucket to penetrate the ground and stop the forward motion of the tractor, and this control error was a contributing cause of the fatal incident. Procedures for the safe operation of tractors are included in manufacturer literature and should always be studied and followed by all farm tractor and equipment operators.

Recommendation #2: Employers should retrofit farm tractors with ROPS and a seat belt and ensure that the seat belt is used.

Discussion: Operator ejection from the driver’s seat was a contributing cause of the incident. Although the tractor was otherwise reportedly in good condition, OKFACE investigators determined that the tractor was not equipped with a seatbelt. The tractor the victim was using was originally equipped and delivered from the manufacturer with a seatbelt as standard equipment. The seatbelt had apparently been removed from the tractor involved in the incident. Had the operator been wearing a seatbelt she may have avoided being dislodged from the tractor seat, and the incident may not have been fatal. Employers must ensure that all required safety equipment is installed and in proper working condition before using farm machinery.

Recommendation #3: Employers should familiarize themselves and their employees with farm safety documents and training materials and participate in hands-on training opportunities.

Discussion: The decedent’s lack of operator experience may have contributed to the control errors that caused the tractor to violently lurch and eject her from the driver’s seat. Witness accounts indicate the decedent was not an experienced tractor operator when she took over farming operations less than a year before the incident. Although her level of training could not be conclusively determined, she reportedly had not participated in any significant amount of training in the use of farm equipment. Small family farm owners/operators frequently do not have a formal safety program or written safety procedures. Farm safety information is available from many sources and in a variety of media. Safety training is a critical component of an effective farm safety program, whether or not the program has been formally developed. Farm owners should ensure that all workers, including family members and part-time or occasional employees, participate in quality safety training that promotes safe job performance on the farm. Manufacturers produce operating manuals for equipment such as the tractor involved in this incident. Such manuals offer critical safety information on safe tractor operation. Employers should read equipment manuals and manufacturer safety information, and keep manuals available for future reference.

Additional resources for documents and training videos include:

The Oklahoma Fatality Assessment and Control Evaluation (OKFACE) is an occupational fatality surveillance project to determine the epidemiology of all fatal work-related injuries and identify and recommend prevention strategies. FACE is a research program of the National Institute for Occupational Safety and Health (NIOSH), Division of Safety Research. These fatality investigations serve to prevent fatal work-related injuries in the future by studying the work environment, the worker, the task the worker was performing, the tools the worker was using, the energy exchange resulting in injury, and the role of management in controlling how these factors interact.