On September 8, 2001, a 37-year-old construction worker was killed when he was run over by a fuel truck in a highway work zone. The victim was employed by a construction company that was doing deck repair on an elevated highway leading into a major urban area. Construction was done only on the weekends to minimize traffic disruption in the area. Sometime after 10:00 a.m., the driver of a fuel truck arrived at the site to refuel two diesel compressors supplying compressed air for the jackhammers and other pneumatic tools. He drove into the work zone, which was marked with traffic cones, and parked between the two compressors. Quickly filling both compressors with fuel, he retracted his fuel line and got into his truck to leave. The driver then started to leave the work zone as another worker behind him stopped traffic. He did not see the victim, who was standing or working near the front of his truck. The truck had only moved a short distance when some other workers from the site yelled for him to stop, and the driver looked at his mirrors and saw the victim on the ground behind him. NJ FACE investigators concluded that, to prevent similar incidents in the future, these safety guidelines should be followed:

On September 11, 2001, a county Medical Examiner notified FACE staff of a construction worker who was killed in a highway work zone. A FACE investigator conferred with the Federal OSHA Compliance Officer who deferred the investigation due to the terrorist attacks of September 11, 2001. OSHA kept in contact with FACE until a concurrent investigation could be conducted on January 3, 2002. During the visit, the FACE investigator observed the OSHA witness interview and privately interviewed a company representative. The fuel truck and incident site were also photographed. Additional information was obtained from the police report, the medical examiner’s report, and the OSHA investigation file.

The victim’s employer was a joint venture of two construction companies who had contracted to do roadwork projects together as one entity. The venture had been formed almost six years ago and employed over 167 workers at the time of the incident. A safety director managed safety issues and enforced a comprehensive written safety program. The victim was a 37-year-old male construction worker who had worked for the venture for six months as a jackhammer operator. His previous employment was not known. He was survived by his wife and two children.

The incident occurred at the site of a highway repair project being done on a major highway leading into a large urban area. The victim’s employer was awarded a NJ Department of Transportation contract in April 2001 to complete bridge deck repairs, highway resurfacing, and parapet replacement. The highway had been originally built in 1953 and required major work to repair and rebuild deteriorating sections of the roadway. The project started immediately after the contract was awarded and was scheduled for completion in June 2002. The repair work was done on weekends to lessen the disruption to traffic on the highway. Work started Friday evening at 8:00 p.m. and continued until Monday morning at 5:00 a.m. With the help of a Construction Trooper (A New Jersey State Police Trooper trained in construction standards who provide patrol cars and impromptu safety inspections at the work zones), the crew closed off about two miles of traffic lanes with signs and traffic cones. Concrete barriers were used, but only in areas where the bridge decking was compromised by the complete removal of the concrete surface. Up to 110 construction workers were transported by bus to the site, which was in operation 24 hours a day during the weekend work cycle. The usual construction method was to remove the old asphalt with a milling machine and inspect the exposed roadway and bridge decking for wear. Deteriorated concrete was removed with jackhammers until the rebar was exposed, and high-tensile strength concrete used to patch the hole. If the damage was extensive, all the concrete and rebar would be removed and the section of bridge deck rebuilt. New asphalt was applied to finish the job.

The weather on the morning of the incident, a Saturday, was clear and dry. The victim arrived and donned an orange safety vest for working at the site. At the time of the incident, the worksite consisted of 39 workers spread among three different work zone within the construction site. Both highway lanes were closed, and traffic was being diverted to a single-lane shoulder adjoining the right hand (slow) traffic lane. Traffic cones were used to mark off most of the area, with some sections of concrete “jersey” traffic barriers set up where needed. The victim was working at the largest work zone. Here, the roadway was an elevated highway spanning the local secondary roads. This area was slightly inclined but straight with good line of sight. All the asphalt from the right lane had been removed and the concrete surface had numerous holes jackhammered into it, exposing the rebar. The victim was working in the right lane on the edge of a large hole that measured approximately 11 feet long by 2 feet wide. Shortly after 10:00 a.m., a fuel truck owned by the joint venture arrived on site to refuel the air compressors that powered the jackhammers. The truck was a 1999 tanker truck with a gross vehicle weight of 41,000 pounds. With a capacity of 800 gallons of diesel and 800 gallons of gasoline, the truck was nearly full when it arrived. A laborer saw the truck arrive and moved a cone to allow it to move from the highway shoulder into the work zone, where the driver positioned it between the two compressors that needed refueling. At that time, all work in that part of the work zone ceased. The driver had 10 years of experience and quickly filled the compressors with diesel fuel, filling the compressor behind his truck first. After filling the second compressor, he moved towards the rear of the truck to reel in the fuel hose. He then climbed into the cab of his truck and waited a few moments for a laborer behind him to stop traffic and wave him on to leave. The driver moved his truck forward at a 45-degree angle towards the victim at a speed of less than five miles per hour. As he did this, two workers ran towards him yelling for him to stop. He realized that he had struck someone when he looked in his mirrors and saw the victim lying on the ground behind him. 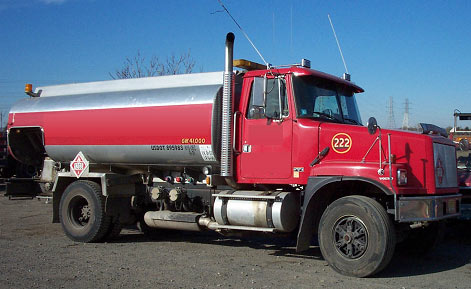 The driver then pulled back into the work zone as a site foreman called 911. At that time, the victim was still breathing and had a pulse. The State Police troopers helping with the construction site arrived quickly, followed by local EMS paramedics who transported the victim to the local hospital. He arrived with CPR in progress but efforts to resuscitate him were unsuccessful. The victim was pronounced dead at the emergency room at 11:22 a.m. 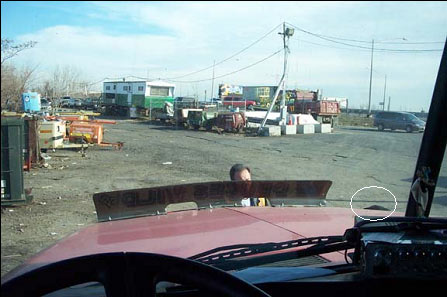 Photo 2. Driver’s field of view inside of tanker truck.
Note pedestrians in front of and directly to the right of bug shield.

Discussion: NIOSH has recently published a booklet describing a number of highway work zone fatalities and recommendations for reducing injuries in work zones. Designed to be used with the latest edition of the US Department of Transportation Manual on Uniform Traffic Control Devices, the booklet outlines a number of additional methods to prevent injuries. One measure is an internal traffic control plan to coordinate the flow of construction vehicles within the work zone. Specifics on the plan can be found in the attached NIOSH publication, Building Safer Highway Work Zones: Measures to Prevent Worker Injuries from Vehicles and Equipment, pages 16 to19.

Recommendation #2: Truck owners should examine their vehicles for blind spots and install mirrors to increase visibility.

Discussion: The tanker truck driver stated that he did not see the victim as he started to drive out of the work zone. After the incident, the OSHA compliance officer and FACE investigator noted the driver’s visibility from the truck’s cab. Two people of varying height were photographed from the drivers seat of the truck. Only the very top of one pedestrian’s head was visible over the right front corner of the truck’s hood, while the second pedestrian was partly obscured by the bug shield (see Photo 2). To prevent this, NJ FACE recommends that all truck owners should examine their trucks for blind spots and install mirrors to cover the blind spots. It was noted that the construction company immediately examined their truck and installed convex mirrors to cover the blind spots.

Recommendation #3: Employers should consider the use of electronic signaling devices or sensors to warn equipment operators of the presence of pedestrians in the blind spots of mobile equipment.

Discussion: Employers should be aware that devices are available which can detect the presence of persons in the blind spots of vehicles and provide a warning to the driver. Devices using electromagnetic sensors are available which can detect persons in the front blind spot of vehicles. One device is intended to be mounted on the front of school buses to warn drivers when children cross into the bus’s front blind spot. Similar devices designed for the rear of vehicles may also be applicable to the front. Employers and truck owners may wish to explore these options.

Staff members of the New Jersey Department of Health and Senior Services, Occupational Health Service, perform FACE investigations when there is a report of a targeted work-related fatal injury. The goal of the FACE Program is to prevent future injuries by studying and identifying the risk factors that contribute to workplace fatalities, by recommending intervention strategies, and by disseminating information to employers and employees. NJ FACE data is reported to NIOSH for trend analysis. All identifiers are removed from the FACE reports and other data to protect the confidentiality of those who participate in the program.