A 30-year-old machine operator, at a furniture store warehouse, was killed when he fell approximately 14 feet from the operating platform of an electrically-powered Crown high-lift rider, commonly referred to as an order picker. When the incident happened, the victim was in the process of going to get a television set (in a box) from a storage shelf 18&frac12 feet from the floor. The order picker he was operating did not have a platform on the forks and the victim was also not tethered off to the order picker. It appears he may have stepped backwards from the operating platform of the order picker, thinking there was a platform on the forks, and fell between the forks to the concrete floor below. When he was discovered on the floor, emergency medical personnel were immediately called and they responded within approximately five minutes. The victim was pronounced dead at the hospital

The Nebraska Department of Labor Investigator concluded that to prevent future similar occurrences:

On April 19, 2000, at approximately 9:15 p.m., a 30-year-old machine operator was killed when he fell approximately 14 feet from a Crown order picker to the concrete floor below. The Nebraska Department of Labor was notified of the fatality on the morning of April 20, 2000, by OSHA. The Nebraska FACE Investigator and an OSHA Compliance Officer conducted a site visit on April 20 and 24, 2000. Interviews were conducted with management and workers on company premises. The FACE Investigator also reviewed the Police Reports concerning this incident.

The victim had been employed by the company for approximately two and a half months. He worked part-time, approximately 20 hours per week, until the end of March and then he was on an “on call” status until the time of the incident. The victim’s training on the order picker consisted of riding with an experienced operator until the operator fell he was qualified to operate the machine alone.

On the day of the incident the victim started his shift at 3:00 p.m. The incident happened at approximately 9:15 p.m. The victim was a machine operator. He operated an electrically-powered Crown high-lift rider commonly referred to as an order picker (see figure 1). The operator rides on the platform as it goes up and down. The incident order picker could rise to a height that would put the forks at 14′ 3″ above the floor. Operators are required to wear a body harness and to be tethered off to a self-retracting lanyard that is secured to the frame of the order picker anytime they are operating the order picker. This is a written and posted policy within the company.

It is also standard operating procedure to have a “flat” on the forks of an order picker when picking an order. The flats are 100″ x 44″ and lock onto the forks of the order picker. They also have a rail at the rear to prevent stock from falling off (see figure 2). The warehouse is set up with many aisles with stock stored on both sides of the aisles. The order picker is steered by the operator until it enters an aisle and then it is automatically steered by a system involving a wire embedded in the concrete in the center of each aisle and an onboard guidance system. When the order picker exits an aisle the operator again has to steer the unit.

On the evening of the incident, an order was received at 8:58 p.m. for a 27″ television. The store closing time that evening was 9:00 p.m. The victim had already taken the flat off his order picker, probably anticipating closing and preparing to take it to the charging area. He took the order picker, without the flat, to the aisle where the television was located. The television was located on the top storage shelf and the order picker had to be raised to its full height of 14′ 3″ to get it.

The customer at the loading dock had been waiting for the television awhile and asked another worker to check on it. A coworker paged the victim and received no response. He then got an order picker and put a flat on it (a process that only takes about one minute) to go and get the television himself. When he pulled into the aisle where the television was located he saw the victim lying on the floor and the order picker in the fully extended position (forks 14′ 3″ from the floor). It was at the location to pick the television off the storage rack (see figure 3). The hand held scanner was also hanging down between the forks of the order picker. He immediately called for help and ran to the victim. The victim was lying about two feet from the base of the order picker. He was wearing a body harness with a “D” ring in the back. The coworker checked for a pulse and detected none. Emergency personnel were called and arrived within five minutes. The victim was taken to a local hospital where he was pronounced dead at 9:47 p.m.

The cause of death, as stated on the death certificate, was multiple skull fractures as a consequence of a fall.

Recommendation #1: Employers and employees should ensure appropriate fall protection equipment is worn by all workers who may be exposed to a fall hazard.

Discussion: When working from elevations, personal protective equipment (PPE) (i.e., safety harness, lifelines and lanyards) should be available and used by all employees exposed to fall hazards. It should be noted that this employer had complied with the requirement of 29 CFR 1910.132 regarding personal protective equipment. The employer required fall protection for the activity being performed at the time of the incident. The policy was posted where the workers pick up their fall protection each day. The policy states in part, “Safety Requirements – Staff operating Hysters must be tethered as soon as they get on the machine. It makes no difference as to what elevation you are working at.” The company and workers refer to the Crown order pickers as “Hysters.” The operator manual for the Crown order picker also states to “wear your harness and attach the tether.”

Recommendation #2: Employers and employees should ensure a pallet is installed on the order picker before an order is pulled.

Discussion: A pallet, commonly referred to as a flat, should have been installed on the order picker before the victim attempted to get the television. It is standard operating procedure for operators to have a flat on an order picker prior to picking orders. Typically, the only time they would not have a flat is when they go to the mezzanine area and pick up or deliver a flat already loaded with merchandise. The flat is 49″ wide and the aisle the incident happened in was 65″ wide, therefore when the order picker is centered in the aisle there is only 8″ of space on each side between the storage shelves and the flat. Even with the victim not being tethered to the order picker had the flat been installed this may have prevented the incident. The victim had most likely already removed the flat from his order picker for the day in preparation to take the order picker to the charging area. Recommend that at least one operator be designated to keep a flat on his order picker until all orders have been received and the warehouse is closed for business. This operator would be responsible for picking all “last minute” orders.

Recommendation #3: Employers should develop and implement a training program for all powered industrial trucks used in their facility.

Discussion: A documented training program is required for powered industrial trucks in accordance with CFR 1910.178. This training shall consist of a combination of formal instruction, practical training, and evaluation of the operator’s performance in the workplace. The employer shall also certify that each operator has been trained and evaluated as required by CFR 1910.178. It should be noted that this training has been accomplished for all operators subsequent to the incident. The company hired an outside trainer to come in and provide the required training.

Recommendation #4: Employers should consider implementing a spot inspection program to ensure all employees are complying with safety requirements and develop and enforce consequences for noncompliance.

NOTE: This company has a video security surveillance system that would be an excellent tool for monitoring compliance with safety requirements. Security personnel who monitor the system could be instructed to look for specific violations, such as no pallets, or individuals not wearing harnesses or not being tethered to the order picker. When they detect a violation they should notify the supervisor who can take corrective action. It would also be a good idea for the safety manager to occasionally monitor the system also to ensure the security personnel are effectively monitoring for safety. 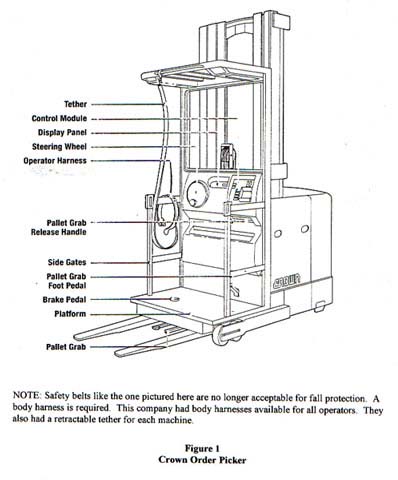 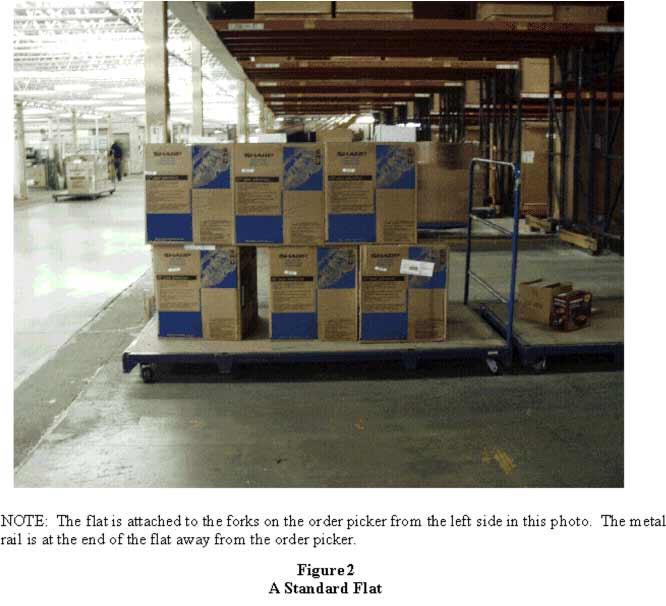 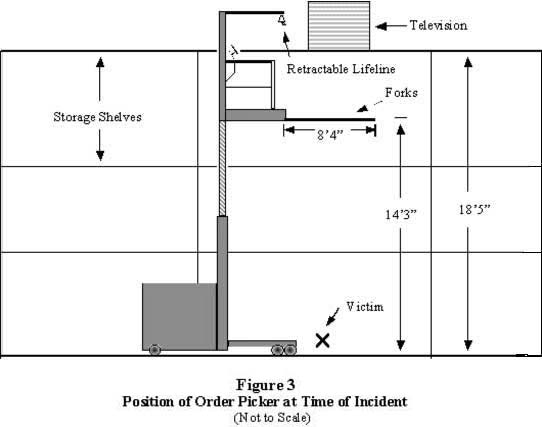