Three overspeed trip tests were required before the turbine that had recently been sent out for repairs could be brought into production operation. The overspeed trip test consisted of allowing the turbine to accelerate to a particular rpm speed to test a mechanical shutoff valve that would prevent the turbine from accelerating to a dangerous speed. On the second test, the mechanical shutoff valve did not function properly and allowed the turbine to reach an overspeed condition. The turbine buckets overran their safe speed, and the turbine rotor failed. One hundred buckets broke away from one of the twelve rings on the shaft and pierced the two-inch thick turbine housing. Fragments from the broken housing and turbine buckets struck the victim causing his death.

On Saturday, February 24, 2001, a 51-year old journeyman machinist was killed when he was struck by fragments projected from a steam turbine that broke apart during an overspeed trip test. On February 26, 2001, MIFACE investigators were informed by the Michigan Occupational Safety and Health Act (MIOSHA) 24-hour fatality report system that a work-related fatal injury occurred on February 24, 2001. On August 15, 2001, the MIFACE researcher interviewed the Safety Engineer of one of the companies involved in the incident. The Safety Engineer accompanied the researcher into the plant, showed her the incident site and described the events that he had been told had taken place that resulted in the fatality.

On Saturday, February 24, 2001, a 51-year old journeyman machinist was killed when he was struck by fragments projected from a steam turbine that broke apart during an overspeed trip test. He and six others were observing the test on the platform that supports the turbine. Six other workers were in the area, but not on the platform. The victim was a 14-year employee of the firm that had recently rebuilt the steam turbine.

Employees from three companies were onsite at the time of the fatality. The victim’s company (Company A) had recently rebuilt the turbine and was assisting with bringing it online. A second company (Company B) operated the steam turbine. A third company (Company C) owned the turbine was responsible for start-up and testing, general maintenance, and repair of the turbine. This shared responsibility situation resulted from an event that had occurred two years previously when Companies B and C were involved in a boiler explosion where six workers were killed. At that time, Companies B and C entered into an agreement whereby Company B, the company that owned the turbines, sold them to Company C. Company B continued to operate the turbines. Company C owned, maintained, and repaired them. Company C needed the wind provided by the turbines to produce a product.

The No 3 turbine involved in the fatality was a General Electric steam turbine purchased in 1930. Of the four turbines owned and used by Company C to supply wind to its blast furnaces, Nos 3 and 4 turbines were identical. The other two were from a different manufacturer. No 3 turbine had been out of service for maintenance since August, 2000, when a piece of steel in a steam line had caused bucket damage. The shaft, rotor, and turbine buckets had been sent to Company A to be rebuilt. Company A had been conducting maintenance on this turbine and the three other steam turbines in this facility for many years. The turbine had been reassembled at the owner’s site in December, 2000, and was being brought online through January, 2001.

Three overspeed trip tests were required before returning the steam turbine into operation. The overspeed trip test consisted of allowing the turbine to accelerate to a maximum rpm speed to test a mechanical shutoff valve. The mechanical shutoff valve was designed to cut off the flow of steam to the turbine at the maximum rpm and thereby prevent the turbine from accelerating to a dangerous speed. Employees were not sure of the actual maximum operating speed or trip speed of the turbine. The General Electric Owner/Operator Manual stated that the operating speed was 3370 – 4100 rpm. Some employees thought it was 4100 to 4200 rpm. One employee indicated that the operating speed was about 4100 rpm. This same employee was not sure but thought that tests to trip the overspeed protection device were done at or as close to 4510 as possible. The manufacturer’s brass tag on the turbine stated the mechanical shutoff valve would trip at 4500 rpm.

At the time of the incident the employees were unaware that the turbine overspeed trip tests could have been conducted from a Compressor Control Corporation (CCC) control unit computer if it had been programmed to do so. The CCC computer had not been programmed, so the test was conducted as it had been in the past. A worker on the platform next to the turbine attached a loop calibrator to the steam admission valve, a transducer actuated by an electrical current. The electrical current was read and adjusted on a milliamp meter. The transducer ultimately controlled the amount of steam provided to the turbine and thereby its speed.

The rpm gauge mounted on the turbine and located at a critical area adjacent to the emergency mechanical trip device was not accurate and did not function per design, so no one had been positioned there to physically trip the mechanical device in case it did not trip on its own. The only functioning rpm readout was on the CCC rpm readout panel on the wall approximately 35 feet from the turbine platform. A person stationed at the CCC rpm readout panel signaled to the person controlling the milliamp meter on the turbine platform whether the rpm should be increased or decreased. Hand signals were used because of the excessive background noise.

At approximately 1:00 p.m., the turbine was started and idled at about 1000 rpm for about 45 minutes to warm up. At approximately 1:55 p.m., the first of the three required trip tests was conducted. According to one employee the mechanical shutoff valve tripped out at 4523 rpm.

On the second of the three planned trip tests, the mechanical shutoff valve did not trip properly. The operator monitoring the rpm at the CCC rpm readout panel was for some reason momentarily unaware that the turbine was exceeding its limit. By the time he recognized the situation and signaled for the milliamp current that was controlling the transducer to be reduced, it was too late to stop the turbine from overspeeding. The mechanical shutoff device did not trip (Figure 2). The turbine buckets overran their safe speed causing a catastrophic failure of the turbine rotor. There were 12 rings on the turbine shaft (Figure 3). One hundred buckets broke away from one of the twelve rings on the shaft and pierced the two-inch thick turbine housing. The other eleven rings remained intact. The fragments resulting from the broken housing and turbine buckets struck the victim causing severe injuries and death.

Several factors contributed to the death of the worker:

Changes have been made since the fatality occurred including:

The cause of death as stated on the death certificate was multiple injuries. The results of all toxicological tests were negative.

• Develop, document, and implement a procedure for inspecting, reporting, operating, maintaining, and repairing equipment and replacing defective equipment based on manufacturer’s instructions, industry guidelines and consensus standards. A job safety analysis of all routine and non-routine work should be included in the procedures.

• Train workers to use the procedures developed in accordance with the manufacturer’s instructions, industry standards, and consensus guidelines. Use the job safety analyses to improve Workers’ ability to recognize existing or potential hazardous conditions.

The mental exercise of conducting a job safety analysis can enhance training and creates awareness regarding safety in general. It can sharpen one’s ability to recognize potential hazards even when they are not directly related to those being studied.

• Develop a clear description of job responsibilities and accountability for each worker and supervisor.

No specific provisions were included in the contract between the companies when the ownership of the steam turbines was changed from one to the other regarding how each company and its employees would transfer and share knowledge and responsibility for the operation and maintenance of the equipment. Some type of plan that considered and anticipated the importance of an organized transfer of responsibility and skills should have anticipated and prevented the situation that resulted in this fatality. Procedures for tracking and accountability of Workers’ and supervisors responsibilities need to be developed and implemented to ensure the continuity of the process.

• Do not operate equipment with nonfunctioning or malfunctioning parts.

The rpm gauge on the turbine was located at a critical position next to the mechanical trip device. Someone positioned at that location would have been able to immediately identify the overspeed condition and physically trip the device. The gauge was placed there for just that reason. Because it was unusable, the designed safety control of the proximate position of the two parts was overlooked. The safety redundancy was subsequently eliminated.

Although guardrails, barriers and signs cannot be the primary means to protect workers, they provide a useful visual reminder of existing hazards to supervisors and workers. The area identified as restricted surrounding No 4 turbine (Figure 1 ) would have encompassed the position where the victim was standing. A visual reminder should be sufficient in itself to warn a worker of a hazard. They also serve to underline the authority of a verbal reminder.

MIFACE (Michigan Fatality and Control Evaluation), Michigan State University (MSU) Occupational & Environmental Medicine, 117 West Fee Hall, East Lansing, Michigan 48824-1315. This information is for educational purposes only. This MIFACE report becomes public property upon publication and may be printed verbatim with credit to MSU. The author of this report is working under contract to MSU and is affiliated with Wayne State University. Reprinting cannot be used to endorse or advertise a commercial product or company. All rights reserved. MSU is an affirmative-action, equal opportunity 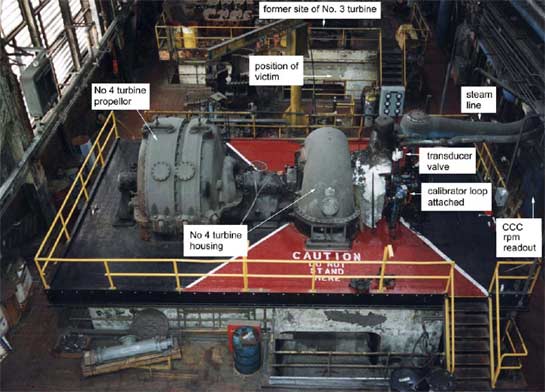 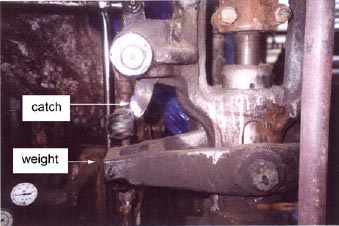 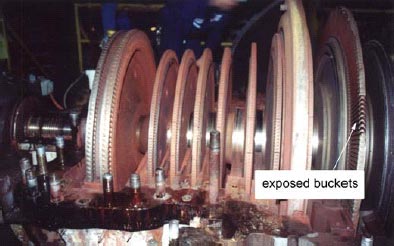