On December 29, 2000, a 61-year-old male salesman was fatally injured in a 10-foot fall from an operator-up high lift truck (order picker) in a warehouse. The victim and a co-worker were working together as one of seven teams performing year-end product inventory. The victim, standing on a platform raised by an order picker, was writing down product type and quantity while the co-worker, standing in the operator’s area of the order picker, was counting product. The victim fell with the platform’s guardrail system when it became detached from the platform. A call was placed and emergency assistance arrived within minutes and transported the victim to a hospital were he was pronounced dead. The Massachusetts FACE Program concluded that to prevent similar occurrences in the future, employers should:

On December 29, 2000, the Massachusetts FACE Program was notified by a local fire department through the 24-hour Occupational Fatality Hotline, that on the same day a 61-year-old male was fatally injured when he fell from an order picker at a warehouse. An investigation was initiated and on February 28, 2001, the Massachusetts FACE Program Director traveled to the company’s facility where the employer was interviewed. The police report, death certificate, OSHA fatality/catastrophe report, and photographs were obtained during the course of the investigation.

The employer, a distributor of mainly food service disposable paper products, had been in business 49 years at the time of the incident. The company employed about 70 people. At the time of the incident, approximately 50 employees were on site and, of these employees, about half were inside the warehouse working with the victim. Twenty-one employees held the same job title, salesman, as the victim. The company’s health and safety program, developed approximately eight years prior to the incident, had not been updated or enforced for several years. There was no specific company representative responsible for health and safety.

The victim had been employed by the company for approximately 22 months at the time of his death and had over 30 years of experience as a salesman. He had received no job training at this company for either his usual sales responsibilities, or for the year-end inventory.

The father of the two current owners had founded the company in the early 1950’s. The company sold food service disposable paper products, such as paper cups and containers and janitorial supplies, such as glass cleaner and other cleaning agents. These products were purchased in bulk and resold to the company’s clients in smaller quantities. The company had relocated to the incident site 90 days prior to the fatality. This location consisted of a warehouse area that was approximately 80,000 square feet and adjacent office space.

The company’s 21 salesmen traveled to clients’ facilities to get product orders. In addition, the salesmen attempted to sell new products and recruit new customers while out on the road. The company employed eight warehouse workers, four of whom worked the first shift, shelving the received bulk product. The remaining four warehouse employees worked the second shift and put orders together for the next day’s deliveries. In addition, the company also employed approximately 20 drivers who delivered product to customers.

The annual inventory, the task being performed during the incident, was usually conducted at the end of the calendar year. Salesmen were required to help warehouse workers with this task which typically was scheduled on a Friday morning for three or four hours. In past years, the company had rented scissor lifts to accomplish this inventory task. This year, days prior to the inventory task, a company that was moving out of a warehouse in the same complex had given the victim’s company five platforms, which were going to be junked, that could be raised on forklift tines.

The victim and the crewmember started at the far end of the warehouse and had two rows of shelves to inventory (the shelves on either side of one aisle). Once a product was inventoried, a round sticker was placed on one of the outer boxes indicating that that product had been counted. It was reported that on approximately the 13th section, the victim, who had been standing on the floor, decided that in order to hear his coworker better he would stand on the platform. This would locate the two team members at the same height because the platform was connected to the order picker tines (previously described) which is fixed with the height of the order picker operator’s area.

Employees assisted the victim while a call was placed for emergency assistance. The local police and fire department responded to the call and the victim was transported to a hospital where he was pronounced dead.

The medical examiner listed the cause of death as multiple traumatic injuries.

Recommendation #1: Employers should perform a hazard analysis before introducing new equipment into the workplace.

Discussion: In this case, the platforms, which were going to be junked, were given to the company, and being used several days later without being evaluated. A hazard analysis should be performed before any borrowed, new, or rented equipment is incorporated into tasks. A hazard analysis should include, but not be limited to an inspection of the equipment condition, compatibility with other equipment with which it will be used, how the equipment is going to be used to complete the tasks, proper use of the equipment and in addition, contacting the equipment manufacturer. Since the platform was “homemade” Massachusetts FACE contacted the order picker manufacturer and asked about using platforms with order pickers. The manufacturer’s response was that “order pickers are not designed for this type of application”.

In this case, conducting a hazard analysis might have revealed that the guardrail system was not structurally secured to the pallet and that the order picker manufacturer had a warning sticker adhered to the order picker, which stated that it was not to be used for lifting personnel.

Recommendation #2: Employers should provide health and safety training to employees before allowing them to perform unfamiliar warehouse tasks.

Discussion: Ideally, the employer could have altered the inventory schedule and had only trained warehouse employees perform the inventory task or hired a company that specializes in warehouse product inventory. In some instances, when non-warehouse employees are needed to help with warehouse based tasks, with which they are unfamiliar, the employer, should provide health and safety training specific to the warehouse task. In this case, the salesmen were pulled once a year from their regular jobs to help perform the year-end product inventory. This was the only time the victim and other salesmen performed tasks inside the warehouse. Inexperienced in operating powered industrial trucks and other warehouse type equipment and activities, these salesmen were placed in an unfamiliar setting and asked to perform an infrequent task without warehouse specific health and safety training.

Development, implementation, enforcement and maintenance of a health and safety program should be done with employee input to ensure that employees participate in their own safety. For companies conducting year-end inventory, a health and safety program should include, but not be limited to, specific warehouse based year-end inventory health and safety training requirements. These training requirements should include recognition and avoidance of unsafe conditions, and written procedures for safe work practices and task completion. In this case, specific training for the salesmen should have included powered industrial truck (forklift) training and training on product storage, retrieval, and inventory in a warehouse setting. A summary of OSHA’s draft proposed safety and health program rule has been included at the end of this report. 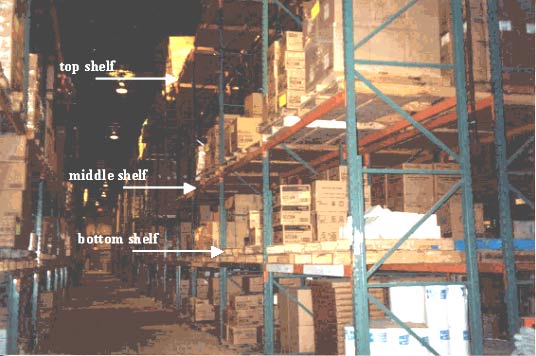 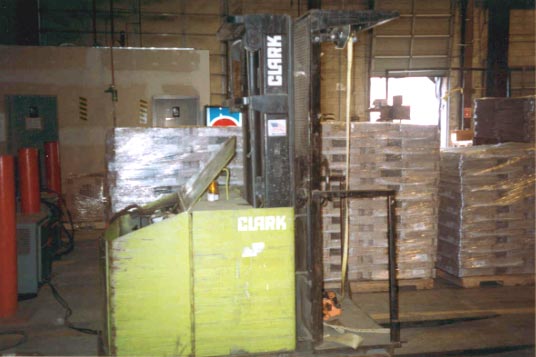 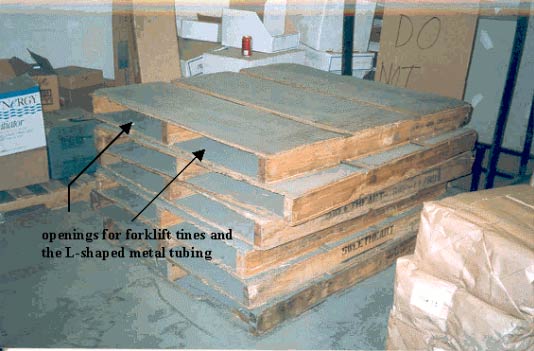 Figure 3 – Same style pallet the guardrail system was connected to. 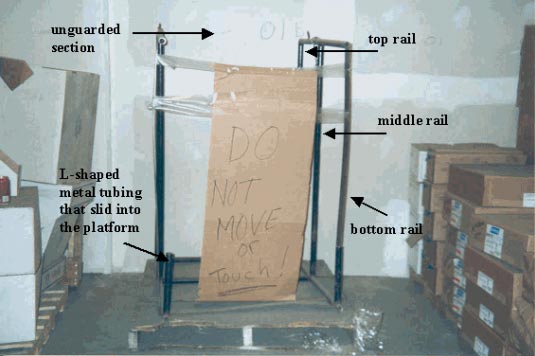 Figure 4 – Guardrail system unattached from the pallet and positioned on one end. 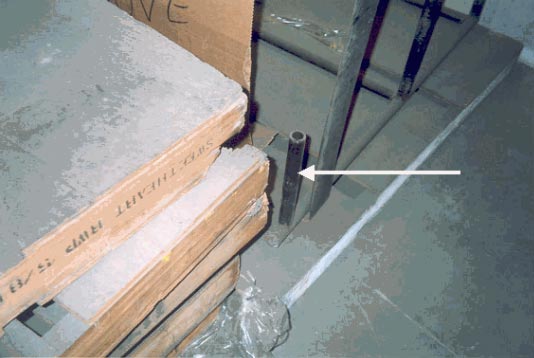 Figure 5 – L-shaped metal tubing that slid into the same opening in the pallet as the order picker tines connecting the guardrail to the pallet.

Figure 6 – Diagram of how the eyebolt was used to fasten the guardrail system to the pallet.