On December 29, 2000, a 37-year-old male equipment operator was fatally injured when he was run over by the bulldozer he was operating at a state mental health facility. While moving the bulldozer into the blacksmith shop, the victim slowed or stopped the bulldozer and climbed out of the bulldozer’s operator area. Once standing on the ground, the victim tried to climb back into the operator’s seat when he became caught on the bulldozer track and was run over. Two co-workers in the immediate area placed a call for emergency assistance and then went to assist the victim. The campus police were on the scene within minutes along with an ambulance, which transported the victim to a local hospital where he was pronounced dead approximately six hours later. The Massachusetts FACE Program concluded that to prevent similar occurrences in the future, employers, including state facilities, that utilize bulldozers should:

In addition, all states without state OSHA plans should:

On January 3, 2001, a local city health department notified the Massachusetts FACE Program through the 24-hour Occupational Fatality Hotline, that on December 29, 2000, a 37-year-old male equipment operator was fatally injured when he was run over by a bulldozer. An investigation was immediately initiated. On January 23, 2001, the Massachusetts FACE Program Director traveled to the campus of the state facility where the manager and one coworker were interviewed. The campus police report, death certificate, and the bulldozer operator/maintenance manual were obtained during the course of the investigation.

The incident site, a state owned residential facility for the mentally retarded, had been in operation approximately 100 years at the time of the incident. The facility employed approximately 400 individuals, 16 of them, including the victim, were part of the farm crew. The facility did not have a designated individual in charge of safety nor a comprehensive health and safety program.

The facility was a self-sufficient residential community for mentally retarded adults. Home to approximately 160 residents, the facility consisted of 2,600 acres of which 350 acres were maintained as a functioning farm.

Employees of the facility held a wide range of jobs including but not limited to clinical (e.g. registered nurses), farming, maintenance, food services, and clerical positions. All maintenance and repairs to various, equipment including farm equipment, construction equipment, and different workshop machines, were performed on site by the employees. In addition, some residents held part-time jobs at the facility producing and selling wood products, operating a farm stand, and maintaining small assembly lines for local businesses to help with the facility’s funds.

At the time of the incident, all five of the bulldozer operators had current state operator’s license through the Massachusetts Department of Public Safety for crawler dozer style equipment. Typical tasks the bulldozer had been used for included road grading, trench style silo packing, and snow removal with the dozer blade. In addition, ditch digging and stump pulling were performed with the backhoe attachment.

Co-worker A, who was moving the front-end loader, went to assist the victim while co-worker B, who was inside the blacksmith shop, placed a call for emergency assistance. According to the police report, co-worker B then exited the building, went over to the bulldozer and shifted it out of gear. Campus police and an ambulance arrived quickly and the victim was rushed to a local hospital where he was pronounced dead approximately six hours later.

One possible scenario is that the victim, while exiting the cab with the machine still in gear and the throttle lever in the idle position, unintentionally bumped the throttle lever (Figure 3) resulting in an increase in engine speed and subsequently motion of the bulldozer. Apparently, the victim attempted to regain control of the bulldozer by stepping on to the track, on which he became caught, to reenter the cab.

The medical examiner listed the cause of death as multiple traumatic injuries.

Recommendation #1: State facilities should train all bulldozer operators on health and safety aspects of the equipment including proper steps to follow when stopping and exiting the bulldozer.

Discussion: This small, self sufficient facility had three bulldozers that were each used infrequently, less than ten times per year. The bulldozer involved in this incident had not been moved in the previous five weeks. Each bulldozer operator had a current operator’s license issued by the Massachusetts Department of Public Safety. To obtain this license an initial examination was required and the license was then automatically renewed every two years without any further requirements.

Recommendation #2: State facilities utilizing bulldozers should develop, implement and enforce a comprehensive health and safety program that includes but is not limited to procedures for entering, exiting and stopping bulldozers.

Given the wide array of tasks performed at this facility, development of a comprehensive health and safety program will be challenging. Development of the program should begin with employee input whereby employees provide lists of the tasks they perform, and identify the potential hazards associated with these tasks. Written procedures for tasks should be established as a combined effort of both management and the workers. All identified hazards should be ranked by severity and those identified as most dangerous to employee’s health and safety should be controlled first. A hazard control completion schedule should be developed for the remaining hazards.

Recommendation #3: States without state OSHA plans should explore options to ensure that state and municipal workers are provided with the same health and safety protection as their private sector counterparts.

Discussion: In Massachusetts, federal OSHA is responsible for enforcing health and safety standards in the private sector. The public sector is not subject to OSHA enforcement, thus state and municipal employers are not legally required to comply with OSHA standards in Massachusetts. OSHA regulation however, set important standards of practice for all employers, public as well as private.

Currently there are 23 states and jurisdictions operating complete state OSHA plans (covering both private sector and state and local government employees) and three that cover public employees only. Massachusetts has neither a state OSHA plan nor a state based occupational health and safety enforcement system for public sector workers. State, municipal, and county employees face similar hazards as their private sector counterparts and should be afforded the same protection.

Recommendation #4: Bulldozer manufacturers should consider equipment engineering design changes, such as developing a step to prevent the operator from stepping on the track while entering or exiting the bulldozer cab.

The step in the upright position could also act as a half-door and guard, providing the operator with increased protection while operating the bulldozer. In the event that the machine unexpectedly moves while the operator is entering or exiting the operator’s area, the possibility of the operator being exposed to and becoming caught on the moving track would be minimized. In addition, the flip step could have an interlock built into it so when the step is in the down position the interlock would disengage the bulldozer tracks. 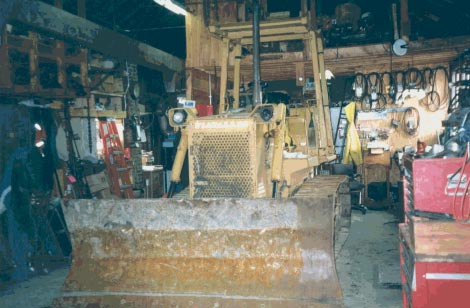 Figure 1 – Bulldozer involved in the incident, inside the blacksmith shop 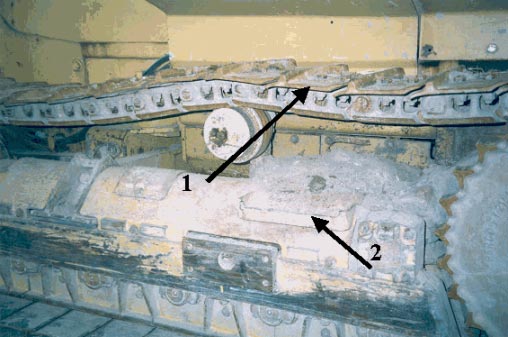 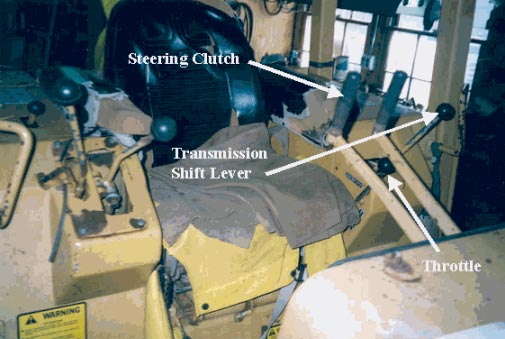