On August 6, 1999, a 29 year old male public works employee died when he was struck by the nozzle of a high pressure water hose. Two employees were doing routine cleaning of the sanitary sewer line using a combination jet/vac truck equipped with a water-powered hose and nozzle. The nozzle somehow came back up through the manhole and struck the victim in the head. His co-worker was at the next manhole some distance away, and not in visible sight due to a ravine and landscape between the two positions. His co-worker stated that as the sewer cleaning was in process, he heard the nozzle approaching his end of the sewer line, indicating there were no obstructions in the line, and radioed the victim. The victim started reeling the hose back to the truck. The co-worker heard the truck idle down and knew that the hose was back at the start of the sewer line. The victim radioed the co-worker to confirm that he was shutting the unit down. The co-worker started fastening down the manhole cover following normal procedures, when he heard the truck idle back up to operating speed. He then heard boys screaming and knew something had happened. It took him some time to get through the ravine and back to the truck. Upon arriving at the truck, he found the victim lying by the manhole with massive head injuries. The nozzle had somehow come back up through the manhole and struck the victim in the head. Bystanders reported that they heard something explode from the back of the truck. They saw the hose spraying water into the air and the victim lying on the street, and immediately called 911. The city police and fire department responded, and the victim was unconscious when they arrived. Life Flight helicopter was notified and transported the victim to a local hospital. The victim remained unconscious and died two days later.

The employer was a municipality which employed 65 full time city employees, with 21 employees in the Public Works Division (SIC code 4952). The victim had worked for the city for about one year as an equipment operator/laborer. He was trained on the combination jet/vac truck in February 1999, and had completed over 200 sewer cleaning jobs. On the day of the incident there was another co-worker at the site, but he was at the next manhole, approximately 500 feet away. The co-worker was not in visible sight due to a ravine and landscape between the two positions.

The city has an extensive safety program with written policies in safety procedures, and has had a good safety record in the past. Safety training is provided for new employees and annually thereafter. Employees assigned to the combination jet/vac process are trained individually on all aspects of the process for several weeks. The trainee works under the direct supervision of an experienced individual during the training process.

Jet-vac sewer cleaning is done throughout the year, but occurs more frequently in the summer and fall when rain causes debris to clog the sewer system. The incident occurred during normal sewer cleaning, so only the water jet portion of the truck was used. Since the sanitary sewer line was not plugged, there was no need for vacuuming.

Each unit consists of at least two employees. One employee operates the combination jet/vac truck and the other employee attends the manhole upstream from the process.

The combination jet/vac process consists of a hose and nozzle that is propelled forward in the sanitary sewer line by high water pressure. Depending on the size and type of sewer line, a steel nozzle weighing 10-12 pounds, is placed on the end of the hose. The steel nozzle controls the rotation to clean the sewer walls. In this incident a 1-inch steel nozzle was used. The water pressure is usually 1100-1200 psi. at the nozzle, which corresponds to 80 gallons of water per minute delivered at the nozzle. This high water pressure allows the nozzle to propel the hose forward in a rotating manner to clear obstructions in the sewer line.

On this occasion, both employees started work at 7:00 AM. Their job assignment for the day was to clean sanitary sewer lines using the combination jet/vac truck, a project that was started the day before. The first run of the day was a short 119-foot section. The two employees completed the usual setup to jet clean this short section, then progressed to the next section. The next manhole location was across a wooded creek draw about 254 feet away. They wrapped up the unit so it could be moved to that location. The victim told the co-worker to stay at their current location and that he would drive around to setup for the next section. As the victim was backing up the truck on an incline, the water alarm sounded. The victim stopped and made the comment that they may need water. After getting the truck back on level ground the victim determined that he had plenty of water to clean the next section. The co-worker waited as the victim drove to the next manhole location, and he heard the victim set the airbrakes on the truck. The victim then walked into the rear yard of the house that he was parked in front of to confirm with the co-worker that he had the right location. The co-worker acknowledged his location after which the victim returned to the truck to setup and clean this section.

Shortly thereafter, the victim radioed the co-worker that the hose was removed. The co-worker began to bolt down the manhole lid when he heard the truck idle back up to operating speed. Within 30 seconds or less, he heard boys screaming and knew something had happened. It took him several minutes to get to the truck because of the ravine. Upon arriving at the truck, he found the victim by the manhole with massive head injuries, and two emergency response individuals leaning over the victim rendering aid to him. Bystanders reported that they heard something explode from the back of the truck, making a noise similar to a loud bottle rocket. They saw the hose spraying water into the air and the victim lying on the street, and immediately called 911.

The co-worker noticed that the pump motor and truck engine were both still running so he immediately shut the pump motor off first and then the truck motor. The victim was wearing a hard hat at the time of the incident, and the hard hat was found on the pavement approximately 20 feet away. The flood light was also lying on the pavement.

When sewer cleaning is complete in one section of the sewer line, the normal procedure is to bring the tiger tail and nozzle up at the same time, remove the tiger tail from the split ring, attach the tiger tail in position on the truck, then wind the hose back onto the reel. For no apparent reason the victim removed the hose from the tiger tail assembly and put the hose back into the manhole and turned on the water pressure, possibly to clean out some debris. When the co-worker turned the water and pump off, he did not note the setting, but remembered that it sounded like the usual operating level of noise. The water was therefore at 1100-1200 psi. immediately at the nozzle.

It appears the nozzle somehow came back up through the manhole and struck the employee in the head, knocking him backward. The hose shot straight up in the air with water spraying out. As the unit began to run out of water the nozzle lost propellant and began to descend allowing tension out of the hose. As the hose went slack one wrap of it came off the hose reel. While water was still coming out, the nozzle and hose fell onto the north grass area. The grass beneath the nozzle was “trenched7quot; about 3-4 inches deep in a muddy area 4-5 feet in length. The street area was very wet and covered with grass clippings from the trenched area.

The manufacturer of the truck took the unit out of service for a number of days to review operating parameters. The truck was purchased two years previous to the incident. The pump had 195 operating hours logged and 550 hours were logged on the truck. The operating system and components were observed to be in good working condition, with only some items showing showed normal wear. The truck was put back into service following the review.

Crisis counseling was offered by the municipality for all workers. City offices were closed on the day of the funeral, so that city employees could attend the funeral.

The cause of death was craniocerebral trauma.

Extreme caution must be exercised when operating the unit since the water pressure can range from 500 – 2,000 psi. Failure to comply with any of the safety instructions may result in severe injury or death. Safe operation is the operator’s responsibility. The jet vac unit should only be used for the purpose for which it was intended.

RECOMMENDATION #2 Safety work practices should be re-emphasized during staff meetings.

Discussion: In this situation, training was provided on the sewer cleaning process. In addition to this, employees should be reminded of the importance of safe work practices and the consequences of using equipment being operated under such high pressure.

FACE is an occupational fatality investigation and surveillance program of the National Institute for Occupational Safety and Health (NIOSH). In the state of Iowa, The University of Iowa, in conjunction with the Iowa Department of Public Health carries out the FACE program. The NIOSH Division of Safety Research in Morgantown, West Virginia, implements FACE as an intramural program in cooperation with Alaska, California, Iowa, Kentucky, Massachusetts, Minnesota, Missouri, Nebraska, New Jersey, Ohio, Oklahoma, Texas, Wisconsin, Washington, and West Virginia. 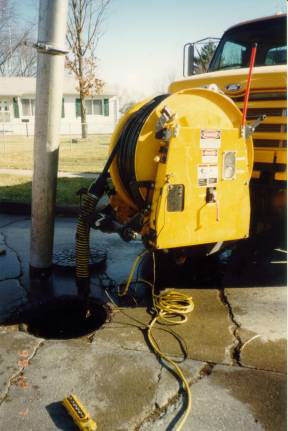 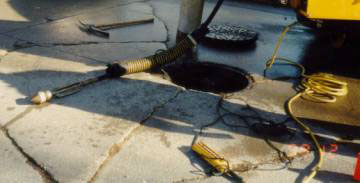 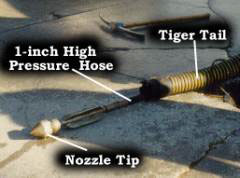