During the summer of 2001, an 82-year-old active farmer was killed while working inside a 15,000-bushel (525 cubic meter) capacity grain bin that was 2/3 filled with shelled corn. He had been in the bin the day before, using a rake to break up clumps of moldy corn to prevent blocking of the unloading auger. On this day, the victim’s son had been unloading the bin using the bottom-unloading auger, and had just filled their semi-truck with 900 bushels (31.5 cubic meters) of corn. The son then drove the grain truck to a grain terminal, and returned 1.5 hours later. He could not find his father, and was suspicious that he might be in the bin because of the behavior of farm dogs. The grandson began to search under the surface of the corn, and eventually found his grandfather completely buried in the corn. Emergency response crews were contacted and upon their arrival, the main bin door was opened. It took an additional two hours to remove enough corn to gain access to the victim, using a grain auger and a grain vacuum. Prior to the unloading of the bin, the victim’s son was not aware that his father was in or around the bins during unloading, and there was no reason for anyone to be in the bin at that time.

In the summer of 2001, an 82-year-old farmer suffocated in a 15,000-bushel (525 cubic meter) grain bin at his farm. The Iowa FACE program was alerted by a newspaper article and immediately began an investigation. Information was gathered from the state Medical Examiner, the county Sheriff, and from area newspapers. Two investigators from the Iowa FACE program, and an out-of-state expert* in grain engulfment and rescue conducted an on-site investigation later that winter after harvest. The victim’s son, who manages the farm, was interviewed, and photographs of the bin were taken.

The victim was a life-long farmer, the owner of a 250 acre cattle and grain farm, where he had lived and worked his entire life. He worked the farm with one of his sons and his family. The farm had cattle and rotated corn and soybeans as crops.

There was no official or written safety program at this family farm, but safety issues were discussed as situations required. Both men were fully aware of the hazards of moving grain and working around grain bins.

The 250-acre farm had about 95 head of feed cattle, 20 stock cows, and grew corn, beans, oats, and hay. In the past they raised hogs as well. The 15,000-bushel grain bin was one of three bins at the farm, the others having 7,000 (245 cubic meter) and 10,000 bushel (350 cubic meter) capacity. The largest bin was a typical farm grain bin with round, corrugated metal sides, metal roof, and four roof vents on all sides. The bin had a tunnel aeration system on the floor of the bin that included a small axial-flow fan (see Photo 1). Each roof vent had a rectangular opening of approximately 14 x 12 inches (35 cm x 30 cm) (see Photo 2).

After harvest, corn was normally dried to about 16% moisture content using a grain drier that was located next to the bins. Floor aeration was used during good drying days to bring the moisture content down further to about 14% throughout.

In the past there had been problems with crusting of the top layer of stored corn. The farmer’s son stated that typically in the wintertime, snow would blow in through the vents, and the top of the corn would get wet and moldy, to a depth of 1-2 feet. This crust layer was deeper in the center of the bin, due to the large number of fines found there. Fines (broken kernels and foreign material) tended to concentrate in the center of the bin, although a grain-spreading device (Photo 3) was used during filling.

Some spoilage had often occurred in the past, and this damaged and clumped grain would need to be broken up and blended with other good grain prior to unloading to prevent clogging. The farmer reported that on prior occasions, an individual entered the bin while the unloading equipment was operating in order to identify and break up clumps of grain. After filling the bin, one or two loads of corn were usually taken out to remove the fines from the center, which allows for more even drying and less spoilage. They normally sold corn from this large bin, and ground corn from other bins to feed cattle. 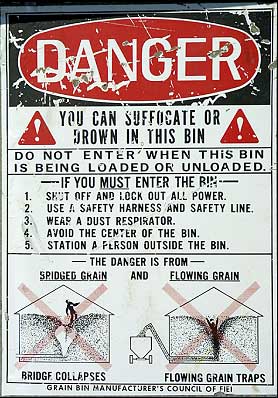 The day before this incident, the men had removed another load of corn from the bin. The farmer was then working in the bin, using a rake to break up small clumps of grain, and blending damaged corn with the good. The elderly farmer was in excellent health, and despite his age, could easily climb ladders on the outside and inside of the grain bin.

On the day of the incident, the victim’s son was unloading grain from the large bin to their semi-truck, using a PTO-powered, 6″ (15 cm) auger. Although there was some clumping the previous day, at this time, the grain was clean. The son did not expect, nor was aware, that his father would be working inside the bin again. The bin was 2/3 full of corn at this time, about 12-14 feet (3.6-4.2 meters) deep at the center. After loading 900 bushels of corn, the son drove the truck to a grain terminal, unloaded, and returned, the trip taking 1½ hours.

When the son returned, he could not locate his father at the farm. He noticed the farm dogs acting strange and walking around the grain bins, and he became suspicious that his father had been in the bin during unloading. He then ascended the bin ladder and peered into the bin but could see nothing from the top of the corn. The victim was found by repeated probing and reaching under the corn. Emergency rescue was called in. An auger and grain vacuum were used to remove corn from the bin, yet it still took an additional two hours before the man was pulled from the corn. The farmer was dead at the scene.

The cause of death taken from the Medical Examiner’s report read, “asphyxiation due to being trapped in a grain silo”. No autopsy was performed.

Recommendation #1 No one should be in grain bins during unloading.

Discussion: Bridged or flowing grain has caused approximately 5 engulfments and suffocations in farm grain bins each year in the United States since 1963 (Kingman et al., 2001). Most farmers appear to be aware of this hazard, yet many take the risk and enter grain bins during unloading. While following this rule may in some instance slow down the unloading process, it is imperative for ensuring the safety of workers and family members who are involved.

Recommendation #2 A safety harness and safety line should be worn when entering bins.

Discussion: Safety harnesses and lifelines are not commonly used on farm grain bins, but they are commonly used at commercial grain handling facilities. Farm grain bins don’t usually have a suitable tie-off point for the safety line. The structure of the grain bin roof is not designed to withstand great forces, and the location of the entrance is usually at one side of the bin. More research and development work might be needed to design the bins so that a harness and a safety line could be easily worn while working in the bin. This might include a retractable safety line from the center of the bin. Fall protection while climbing up the outside of grain bins is another safety issue, and a harness and lanyard could also be used here if suitable protective modifications are built into the ladder structure.

Recommendation #3 When entering grain bins, a second person is needed outside the bin, with an adequate communication method.

Discussion: In this case the farmer had entered the bin without his son knowing it. Before they had worked together, one in the bin and one outside. This time the farmer’s son was not aware of the hazardous situation, and the farmer inside the bin was not able to communicate to his son outside the bin because of the noisy environment.

Recommendation #4 Bin unloading equipment should be locked-out prior to an individual entering a bin.

Discussion: Although not a common practice on farms, commercial grain handlers are required to de-energize and prevent the operation of all unloading equipment prior to the entry of an individual into a confined space such as a grain bin. This prevents the inadvertent operation of the unloading equipment by persons who are unaware of a bin an entrant. In addition, this would prevent the circumstance where an individual would be located on the surface of the grain during the unloading of a bin.

Recommendation #5 A safety-response plan should be developed prior to entering the bin.

Discussion: In other engulfment cases, it has been found that multiple deaths occurred after bystanders responded to an engulfment situation by placing themselves at risk of engulfment. Prior to entering a bin, the farm workers should formulate a response plan that includes alerting all workers of an apparent entrapment, a safe meeting location where workers can be counted, activation of emergency response personnel, and the identification of safe and unsafe actions that could and could not be taken in response to an engulfment. In this case, the victim’s son risked engulfment by entering the bin to search for his father.

FACE is an occupational fatality investigation and surveillance program of the National Institute for Occupational Safety and Health (NIOSH). In the state of Iowa, The University of Iowa, in conjunction with the Iowa Department of Public Health carries out the FACE program. The NIOSH head office in Morgantown, West Virginia, carries out an intramural FACE program and funds state-based programs in Alaska, California, Iowa, Kentucky, Massachusetts, Minnesota, Nebraska, New Jersey, New York, Ohio, Oklahoma, Texas, Washington, West Virginia, and Wisconsin.