In October of 2000, two elderly farmers were found dead in the pen area of a young Black Angus bull, on the farm where they had lived and worked for the last 27 years. The men had multiple rib fractures, apparently from being butted up against the side of the nearby barn. The two victims were found by a third brother, who had just returned from the hospital, where he was recuperating from injuries suffered when he was attacked by the same bull five days earlier. The pen was a fenced area in front of the barn, and to access the barn door the farmers had to walk through the pen. There was no escape route or protected areas from animal attack in the pen. The bull was kept in the barn at night and in the pen or pasture during daytime. The farmers handled the animals daily and had no problems with the bull until one of the brothers was attacked and five days later when the two other brothers were fatally injured by the bull. The bull’s sire had been on the farm earlier, but was not kept due to aggressive behavior. There were no obvious indications that the bull was aggravated by handling or specific unusual events.

On October 9, 2000, two brothers, aged 84 and 79, were found dead in the pen area of an Angus bull on their farm. The Iowa FACE program was notified of the incident the next day by a colleague who heard of the attack from a local news source. Contact was made with a Deputy County Sheriff, who was one of the first on the scene. He had taken several pictures of the scene, and was willing to share them with The FACE program. Two investigators from the Iowa FACE program made a site visit in mid-January and, accompanied by the Chief of Police, interviewed the surviving brother at his farm.

The farm was 47½ acres, and produced hay, corn, and oats. The three brothers, along with a fourth brother, had lived at this location for the past 27 years. They used draft horses for much of this time, and preferred to farm the “old fashioned way”. Hogs and chickens were also raised in the past, but at the time of this incident, only cattle were raised. They bred their own cattle and milk cows, and always had a bull on the farm.

The two victims were working together on the farm on the day of their death. There was no safety program in place. All farm responsibilities were shared between the three brothers. 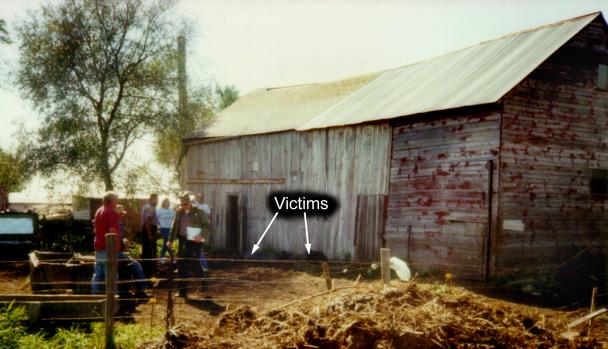 The small farm had six head of cows / calves, the young bull, and two horses. There were a few outbuildings; one was the barn, which housed the Black Angus mixed bull on one end, with two horses on the other end (See Photo 1). The barn was single story, and was ~20 ft. by 30 ft. in size. The penned area for the bull and milk cows was fenced off with barbed wire and an electric fence, which was operating at the time. The brothers frequently went in and out of this pen area while caring for livestock. They were not worried about personal safety and had not constructed secure areas or barriers within the pen area for protection from livestock.

The bull was 7-8 months old and weighed an estimated 750 lbs. Its sire was a Black Angus and Holstein mix, and its dam was a Holstein cow. The bull did not have horns. The brothers had purchased the bull’s sire in the past, but could not keep it on the farm due its aggressive and mean behavior. Since the bull calf was born, the brothers had cared for it on a daily basis, and never experienced any unusual or aggressive behavior while raising the bull. Their normal routine was to feed the cows and the horses ground feed in the morning, and then turn them out to pasture. The surviving brother had been injured by the same bull five days earlier. This was the first and only time the bull showed any aggressive behavior since it was born. The young bull became “ugly” while being fed and charged and butted the brother while he was in the doorway to the barn. The man escaped, yet had injuries sufficient to warrant a trip to the hospital for evaluation. He was released from the hospital five days later.

When he returned home, he was surprised not to see his two brothers at home. After a few hours, he walked around the farm and saw them, lying on the ground pushed up against the side of the barn. The bull was next to the barn at this time. The man took a whip for protection and entered the open pen area to check on his brothers. After realizing they were dead, he called a family friend, who immediately called the County Sheriff, who came to investigate the scene.

When the Sheriff and deputies arrived, the bull was in the pasture with the cows. It displayed aggressive and angry behavior towards those at the scene, charging the fence. Following a request by the surviving brother, the young bull was killed by the Sheriff.

Both victims had been dead for several hours. They had obvious flail chests, and chest bruising, indicating they were butted up against the side of the barn. The side of the barn had fresh scuff marks where the brothers were found, possibly from when the bull charged the men. Their bodies were in unusual crumpled positions, indicating the bull had pushed them around on the ground after knocking them down. There was no evidence they had been kicked or stomped. A pair of glasses was found on the ground in the center of the pen area, apparently where one of the men was first attacked.

The two victims were working together on the farm on the day of their death. It is not known exactly what preceded the attack by the bull. The doors of the barn were open, as was the barbed wire gate to the pen area. It is possible that one brother was attacked while working with livestock in the pen, and that the second brother entered the pen area to help him.

The official cause of death following autopsy by the County Medical Examiner was, “Massive blunt trauma due to attack by bull”.

Recommendation #1: Aggressive animals should not be used as herd sires.

Discussion: The sire of the bull had been on this farm earlier and was sent back to the livestock dealer due to aggressive behavior. In breeding, many factors including individual body type, pedigree, show ring winnings, and production test results may be considered when choosing sires. Aggressive behavior is one hereditary trait that must be considered, as this can be a serious hazard for livestock handlers. In small livestock operations it may be difficult to replace a bull, but for the safety of handlers, aggressive animals should be removed from the livestock herd.

Recommendation #2 Proper handling facilities for bulls should include escape routes and protected areas for handlers.

Discussion: The bull was kept in the barn at night and in the pen outside the barn during the day. The pen was an area in front of the barn, fenced by electric fence. To get to the barn, the farmers had to walk through the pen. Besides going over or under the fence, there was no escape route, and leading the bull in and out required being in the pen with the bull with little protection. Animal handling facilities should be designed with an escape route or areas where the handler can quickly get to safety in case animals become aggressive. In this case the pen area could have been designed to the side of the building so that it was possible to access the barn door without going into the pen every time. Movable panels, fences, or other barriers could be installed in pen areas to provide safe retreats for workers. Dairy bulls are known to be hazardous and they require handling facilities where the worker does not have to be in the same confined area with a loose bull.

Discussion: Working with large animals is inherently dangerous. Bulls are especially dangerous and extra precautions are needed. An escape route should be always near by, and the handler should be ready to use it quickly if the animals become angry. Being in a confined space with a single agitated animal is especially dangerous. No one should enter a bull pen when the bull is loose. Specific attention should be paid to the animal’s behavior at all times. Any signs of aggressiveness should be taken seriously. Learning each animals flight zone helps in handling and moving the animal safely. The natural instincts of a growing bull may cause attacks. Sexually maturing bulls may perceive the handlers as a herd mates and attempt to dominate by challenging them. Dairy bulls that are individually bucket fed are often more dangerous than beef bulls raised with the cow or in a herd. Apparently, an isolated young bull can bond so well with human handlers that he “forgets he is a bull”, causing him to challenge or dominate his herd mates (handlers), becoming unusually aggressive when his hormones kick in.

The safe handling practices include calm, slow and steady movements, and avoiding surprising noises or incidents. Early gentle handling and domesticating them to usual handling situations calm the animals. Eliminating clear aggravating events is helpful as well, including fear when being separated from the herd, unusual behavior of handler or other animals, and sudden exposure to new things in the environment.