Operator of Horizontal Boring Machine Is Crushed To Death (00IA003)

Facility EMS personnel were notified and CPR started. Registered nurses, physician and EMS employees from the plant responded within minutes. A county deputy sheriff and ambulance personnel also arrived at the scene soon after being notified. The victim was transported to a local hospital where he was pronounced dead upon arrival.

RECOMMENDATIONS based on our evaluation are as follows:

At 9:24 AM a machinist was crushed while lubricating a horizontal boring machine. The Iowa FACE evaluation team was notified of the fatality by OSHA. An on-site evaluation was conducted on February 25, 2000.

The machinist had worked at the manufacturing company for 28 years, and had worked on that machine since March 1999. He was a union member and had attended required safety training.

The manufacturing company employs 2,700 employees at this facility, and has an extensive safety-training program. Employees are required to attend safety training and document they are aware of specific requirements pertaining to their job.

The horizontal boring machine was referred to as a block line machine. As the cast iron engine block passes by the machining process drills and bores holes horizontally in the engine block. During the process the boring section moves to the right horizontally until it rests about five inches from the frame of the machine block (shown in Photos 1 and 2). When in operation, the horizontal boring machine cycles through the boring process every three minutes. The boring process is characterized by distinct noises caused by the hydraulic mechanism involved.

The horizontal boring process involves two employees that work together as a team. The first operator sets up the machine, which includes pushing 10 buttons in succession, and inserts the engine block at the beginning of the line. He is also responsible to lubricate the machine and clean the bushings. During the horizontal boring process, the bushing may get full requiring that it be cleaned out and oiled. This particular bushing was noted for sticking which would slow down the process. The first operator always cleaned and oiled the bushings at the beginning of the shift before the machine was turned on.

There is not a clear line of sight between the two employees, and communication between the two employees is crucial. Each employee has their own responsibility and if either operator has to leave the area, the machine is shut down until the operator returns. Periodically (nine months to a year), the machine operators switch job responsibilities. The first operator had been at that position for three months prior to the incident. The second operator (the victim) had been at his position for 11 months prior to the incident.

On the day of the incident both employees began working at the beginning of the 6:00 AM shift. At 8:00 AM, the first operator was called to assist on another machine that was having problems. He turned off the machine, and went to assist with the other machine, and finished around break time, which was 8:45 AM. After break, he returned to the area. He didn’t see the second operator, but wasn’t concerned because the victim would frequently spend break time with friends in another department. He turned the machine on and walked around to the backside of the machine to look for the other operator. He found the victim lying on the floor and the safety gate was open.

No employees witnessed the incident. It appeared the victim had opened the safety gate and was lubricating the bushing since that particular bushing was noted for sticking. When the machine was turned on, it immediately moves to the farthest right horizontal position and rests there before beginning the cycle. The victim was crushed against the frame of the machine. Company officials acknowledged that this was a severe breach of safety, since lubricating the bushings was usually done before the shift began.

A flashlight, still in the ON position, was found on the floor of the caged area. A squirt bottle of lubricant, which appeared to be dropped by the victim, was also on the floor. The victim was wearing appropriate work type clothing, including work boots and earplugs.

Facility EMS personnel were notified and CPR started. Registered nurses, physician and EMS employees from the plant responded. A county deputy sheriff and ambulance personnel arrived at the scene within minutes. The victim was transported to a local hospital where he was pronounced dead.

The Medical Examiner listed the immediate cause of death as crush injury to chest by machinery. Autopsy revealed the man was crushed in the thoracic region with great force, and confirmed the region where he was pinned by the protruding bolt.

Employers should ensure that safety gates are locked or otherwise secured, while machines are in operation, in order to prevent personnel from entering dangerous areas. A safety switch should be installed on the machine, to disconnect the machine when the safety gate is open.

Discussion: The horizontal boring machine had a protruding bolt that left only three inches of space between the machine unit and the machine frame at the end of its cycle. This was recognized as a ‘pinch point’ in 1995. A safety gate was installed and employees were instructed not to open the gate to lubricate the machine while it was in operation.

Engineering controls are the preferred method of control. A safety gate that would act as an inter-lock gate would prevent the machine from operating when the gate was open. This is especially important since in this case there was not a direct line of site between the two operators.

Discussion: Safety training is a critical element in an integrated safety program and should include the communication of task-specific safety procedures and training in the avoidance and abatement of these hazards. Employees should have the knowledge, training, and experience to perform the job that he/she is designated; including lock-out procedures for maintenance. Employees must follow these procedures during maintenance operations.

Retraining should be provided whenever there is a change in job assignments. Training is essential when several employees work together on a process and communication is necessary. In this case, there may not have been a clear understanding of safe work procedures for oiling and cleaning the bushing.

FACE is an occupational fatality investigation and surveillance program of the National Institute for Occupational Safety and Health (NIOSH). In the state of Iowa, The University of Iowa, in conjunction with the Iowa Department of Public Health carries out the FACE program. The NIOSH Division of Safety Research in Morgantown, West Virginia, implements FACE as an intramural program in cooperation with Alaska, California, Iowa, Kentucky, Massachusetts, Minnesota, Missouri, Nebraska, New Jersey, Ohio, Oklahoma, Texas, Wisconsin, Washington, and West Virginia. 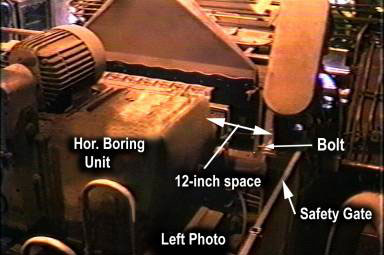 Shows horizontal boring unit in its left position, with 12-inch workspace between end of unit and the machine frame, the area where employees must lubricate and clean the bushings. Photo also shows the 2-inch bolt that protrudes into this area, and the safety gate installed in 1995. 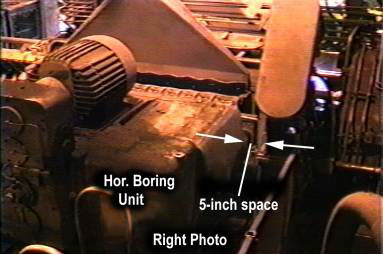 Shows the same view of the machine in its right position, with only a 5-inch space between the boring unit and the frame, the space where the victim was crushed while lubricating the bushing.