A 57-year-old male electrical mechanic (the victim) died after falling through an unguarded floor opening. The victim was measuring, cutting, and color coding electrical cable with two coworkers on the unfinished fourth floor of the building at the time of the incident. The floor measured 108 feet wide by 300 feet long and contained 1 unguarded opening which measured 54 inches wide by 43 inches long. Just prior to the incident, the victim and a coworker were rewinding electrical cable. One coworker was positioned at the spool manually turning it; the victim was holding onto the end of the cable, walking backwards and pulling the cable straight so it would rewind evenly. The coworker felt the spool jerk out of his hands and saw the spool fall through the floor opening. Neither coworker saw the victim step backwards into the unguarded floor opening. The victim fell 45 feet to the concrete floor below, and the spool fell on top of him. Workers on the first floor heard the victim fall and ran to give assistance. One of the coworkers ran to the general contractor’s trailer where a call was made for emergency services. Fire department first responders arrived within 2 minutes after receiving the call and checked the victim. Due to the extent of injuries, no first aid was administered. The victim was pronounced dead by a medic at the scene. NIOSH investigators concluded that, in order to prevent similar occurrences, employers should:

On April 22, 1998, a 57-year-old male electrical mechanic (the victim) died after he stepped backwards into an unguarded floor opening and fell 45 feet to the concrete floor below. On May 11, 1998 officials of the North Carolina Occupational Safety and Health Administration (NCOSHA) notified the Division of Safety Research (DSR) of this fatality, and requested technical assistance. On May 19, 1998, a DSR safety specialist investigated and reviewed the incident with the general contractor, the subcontractor who employed the victim, and the NCOSHA compliance officer assigned to the case. Photographs of the incident site, the death certificate and the coroner’s report were obtained during the investigation.

The employer in this incident was an electrical subcontractor who employed 1,185 people in a multi-state region. The company had a written safety program and employee safety handbooks. Training was provided on the job. The electrical subcontractor had appointed his project superintendent as the competent person responsible for safe working conditions for his employees.

The competent person or his designee conducted weekly safety meetings using training materials sent from company headquarters. Fall protection was the topic of the safety meeting held 2 weeks prior to the incident, but the victim, his foreman, and the two coworkers working with him at the time of the incident had not attended. The victim had worked for the company for 5 months and had worked as an electrical mechanic for 12 years. The company had been in operation for approximately 36 years and had experienced two previous fatalities, neither of which were falls.

The employer had been subcontracted to install the electrical circuitry at a newly constructed four-story office complex. A 12-man crew was performing the work and 3 of them were assigned to work on the fourth floor. The victim had worked on the unfinished fourth floor installing electrical components for approximately 1 month prior to the incident. On the day of the incident, the victim had spent the morning on the fourth floor of the building cutting openings for electrical switches. He left the work site for an appointment and returned about 2 p.m. In the meantime, 2 high school students (coworkers), who had worked at the site part-time for over 8 months as part of a high school electrical apprenticeship program, arrived at the site. At around 1:30 p.m., the foreman directed them to go to the fourth floor and measure and cut lengths of electrical cable from four spools. They were to roll out the 250 millicircular mil electrical cable which is made up of copper wires covered with a rubber outside casing. The diameter of the cable was 3/4 inch and once unrolled the cable was fairly rigid. The coworkers were to roll the cable off the spools manually as they did not have jacks on which to place the spools, and cut the cable into six 56-foot lengths. They were then to color-code the cables for installation.

An unguarded floor opening which measured 54 inches wide by 43 inches long was located about 12 feet from the end of the floor and about 100 feet from the electrical room where the workers had placed the spools of cable. The coworkers were unrolling cable in the direction of the floor opening. According to witness statements, a standard guardrail system had been installed by the metal framing contractor in January and the guardrail was in place when the HVAC subcontractor finished work around the opening. The floor opening was not guarded the day of the incident, and witnesses estimated that the guardrail had been down for between 2 and 3 weeks prior to the incident. The coworker placed the wooden spools on their sides near the electrical room and pulled and cut five 56-foot lengths of cable. At approximately 2 p.m., the victim joined his co- workers on the fourth floor. To avoid obstacles (building materials located on the floor), they chose to unroll the cable near the center of the floor, which placed the work performed in line with the unguarded floor opening (Figure 1). While one co-worker color-coded the cables that had already been cut, the other coworker and the victim unrolled the last length of cable. The remaining cable was less than the 56-foot piece needed, so they decided to wind it back onto the spool. At approximately 2:30 p.m., the victim walked to the end of the cable, picked it up, and pulled on it while walking backwards to straighten it so that it could be rewound more easily. While walking backwards and pulling on the cable, he apparently stepped into the unguarded floor opening. The coworker who had been manually re-winding the cable onto the spool felt the spool jerk out of his hands and saw it go down the floor opening. Neither coworker saw the victim fall into the floor opening. The victim fell 45 feet, landing on concrete on the first floor, and the spool fell on top of him. The coworker yelled for help and workers on the first floor, who heard the victim fall, ran to assist the victim. The coworker then ran to the general contractor’s trailer located about 150 yards from the incident site and informed the general contractor of the incident. The general contractor called 911. Fire department first responders arrived within 2 minutes after receiving the call and checked the victim. Although they initially felt a weak pulse, the victim had no vital signs within 2-3 minutes, and due to the extent of the victim’s injuries, no first aid was attempted. The victim was pronounced dead by a medic at the scene at 2:40 p.m.

None of the subcontractors or workers interviewed were able to recall who had taken the guardrail down. The competent person told investigators that he had warned workers to stay 10 feet from openings and edges, and workers were told to wear a personal fall arrest system when their work necessitated getting closer than 10 feet from fall hazards. The fall protection safety training held 2 weeks before the incident did not include this warning/instruction. A safety inspection performed by the victim’s employer several weeks prior to the incident documented the presence of the unguarded floor opening and the investigation form indicated the general contractor as the responsible party for correction. The general contractor was not aware of the form or any designation regarding responsibility for correction of unguarded floor openings. There was no written contract between contractors regarding safety responsibilities.

Witnesses indicate that the electrical contractor did not have the equipment and tools onsite to install or remove guardrails. That task would be performed by one of the other subcontractors. The general contractor had planned an inspection of the work site the day of the incident but did not get to the fourth floor because of problems elsewhere on the site.

The victim was wearing a hard hat, safety glasses, and leather boots the day of the incident but was not wearing any other safety equipment.

The county medical examiner listed blunt trauma injuries to head and chest due to fall from height as the cause of death.

Recommendation #1: Employers should ensure that employees on walking/working surfaces are protected from falling through holes more than 6 feet above lower levels by personal fall arrest systems, covers, or guardrail systems erected around such holes.

Discussion: The victim was pulling on the end of a cable and walking backwards when he stepped into an unguarded floor opening on the fourth floor of a building under construction. Although guardrails were installed initially, they were removed at some point after HVAC duct work was completed. Ensuring the use of personal fall arrest systems, standard guardrails or covers secured against displacement as required by CFR 1926.501(b)(4)(i)and (ii) respectively could have prevented this incident from occurring.

Recommendation #2: Employers on multi-employer sites should utilize contract language that clearly defines the safety responsibilities of each contractor prior to the initiation of work.

Discussion: There was no contract language between contractors that clearly defined the safety responsibilities of each contractor onsite. A contract should be written that contains clear and concise language as to which party is responsible for a given safety and health issue. Any differences should be negotiated and resolved before work begins. Once the provisions for these responsibilities have been established, the respective parties should ensure that all provisions regarding safety and health are upheld. When an imminent danger such as an unguarded floor opening is discovered, work in the area should be stopped until the hazard is corrected by the responsible party identified in the contract.

Recommendation #3: Employers should remove employees from areas where an imminent danger has been identified and corrective action has not been completed.

Discussion: Employers are required to assign the duties of competent person to one or more of their supervisors on the construction jobsite with regard to fall protection. The competent person has the authority to take prompt corrective action when working conditions are identified that are dangerous to employees. An unguarded floor opening poses an imminent danger and competent persons should remove their employees from the area until the hazard has been corrected. This is particularly important when the employer does not have the equipment or tools to correct the hazard immediately. 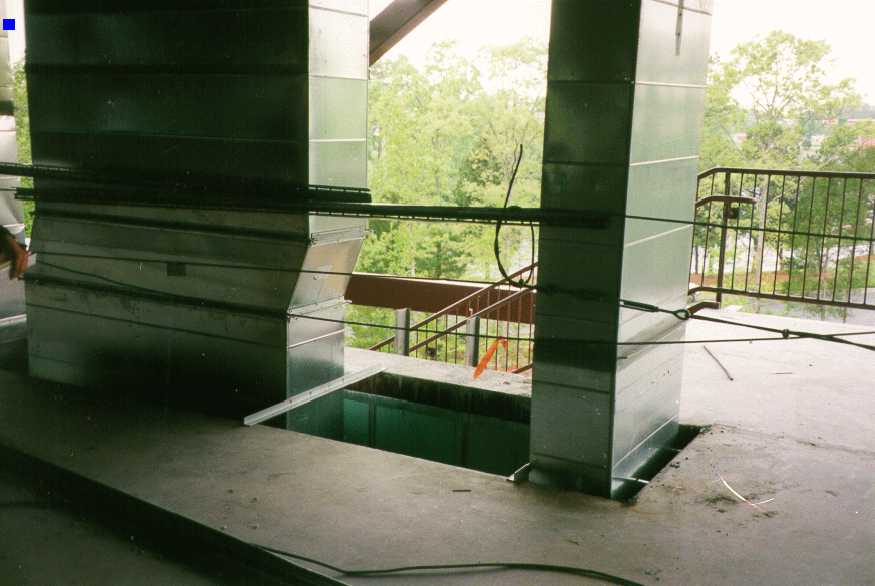 Competent person: One who is capable of identifying existing and predictable hazards in the surroundings or working conditions which are unsanitary, hazardous, or dangerous to employees, and who has the authority to take prompt corrective measures to eliminate them.

Imminent danger: A hazard that could cause death or serious physical harm immediately, or before the danger could be eliminated through normal enforcement procedures (Fact Sheet OSHA 93-02).