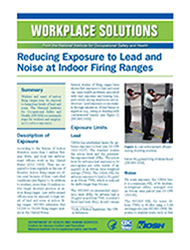 Workers and users of indoor firing ranges may be exposed to hazardous levels of lead and noise. The National Institute for Occupational Safety and Health (NIOSH) recommends steps for workers and employers to reduce exposures.

Several studies of firing ranges have shown that exposure to lead and noise can cause health problems associated with lead exposure and hearing loss, particularly among employees and instructors. Lead exposure occurs mainly through inhalation of lead fumes or ingestion (e.g., eating or drinking with contaminated hands).