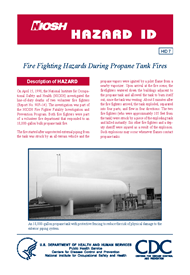 On April 15, 1998, the National Institute for Occupational Safety and Health (NIOSH) investigated the line-of-duty deaths of two volunteer firefighters (Report No. 98F14). The investigation was part of the NIOSH Fire Fighter Fatality Investigation and Prevention Program. Both firefighters were part of a volunteer fire department that responded to an 18,000-gallon bulk propane tank fire.

The fire started after unprotected external piping from the tank was struck by an all-terrain vehicle and the propane vapors were ignited by a pilot flame from a nearby vaporizer. Upon arrival at the fire scene, the firefighters watered down the buildings adjacent to the propane tank and allowed the tank to burn itself out, since the tank was venting. About 8 minutes after the fire fighters arrived, the tank exploded, separated into four parts, and flew in four directions. The two firefighters (who were approximately 105 feet from the tank) were struck by a piece of the exploding tank and killed instantly. Six other firefighters and a deputy sheriff were injured as a result of the explosion. Such explosions may occur whenever flames contact propane tanks.

An 18,000-gallon propane tank with protective fencing to reduce the risk of physical damage to the exterior piping system.

During propane tank fires, the potential always exists for an explosion known as boiling liquid expanding vapor explosion (BLEVE). To reduce this risk, fire departments, fire fighters, and propane tank owners and users should follow the recommendations below. They are based on emergency response procedures in the 1996 North American Emergency Response Guidebook (NAERG96), which were developed jointly by Transport Canada, the U.S. Department of Transportation, and the Secretariat of Communications and Transportation of Mexico.

Fire fighters should do the following:

Fire departments should do the following:

Propane tank owners and users should do the following:

The Fire Fighter Fatality Investigation and Prevention Program is conducted by NIOSH. The purpose of the program is to determine factors that cause or contribute to fire fighter deaths suffered in the line of duty and to develop strategies for preventing similar incidents in the future.