WARNING! Exposure to crystalline silica during rock drilling can cause serious or fatal respiratory disease.

The National Institute for Occupational Safety and Health (NIOSH) requests assistance in preventing silicosis and deaths in workers exposed to respirable crystalline silica. The need is urgent to inform surface coal mine and other rock drillers, driller helpers, employers of drillers, and drill rig manufacturers about the respiratory hazards associated with drilling operations. Your assistance in this effort will help prevent silicosis-related death and disease, a national goal for health promotion and disease prevention stated in Healthy People 2000 [DHHS 1990].

This Alert describes 23 cases of silicosis from exposure to crystalline silica during rock drilling. Of the 23 workers reported, 2 workers have already died from the disease, and the remaining 21 may die eventually from silicosis or its complications.

NIOSH requests that editors of trade journals, safety and health officials, labor unions, and employers bring the recommendations in this Alert to the attention of all workers who are at risk. NIOSH also requests that manufacturers of drill rigs and other rock drilling equipment become familiar with and implement the source control measures recommended in this Alert.

An early step in the surface or strip mining process is the removal of topsoil and other overburden materials, including sandstones, shales, limestones, and unconsolidated soils. Removal of these materials may require drilling holes into the rock formation to accept explosive charges for blasting. After blasting, the debris is cleared with earth-moving equipment such as drag line cranes, end loaders, or power shovels.

Silica Exposure During Surface Mine Drilling

When the drilled rock has significant crystalline silica* content, the drill operators and helpers may be exposed to large amounts of respirable crystalline silica. Such exposure places these workers at high risk of developing silicosis. Rock drillers operate large, mobile rotary rigs that drill holes in the rock (Figure 1). Compressed air is often used to keep the drill hole clear and to cool bit-cutting points and bearings. This process frequently generates large clouds of dust containing crystalline silica (Figure 2).

Operators of earth-moving equipment may also be exposed to silica when removing overburden materials. 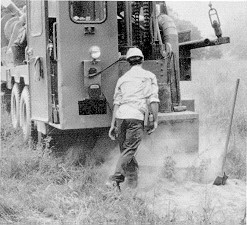 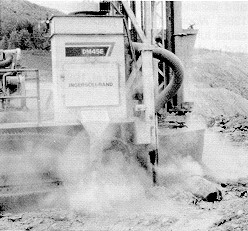 Surface coal mine operators must comply with the MSHA permissible exposure limit (PEL) of 2.0 milligrams of respirable coal mine dust per cubic meter of air (2mg/m3). However, when the respirable quartz (crystalline silica) content of the dust is greater than 5%, the PEL is reduced as follows [30 CFR** 71.101]:

For metal and nonmetal surface and underground mines, the MSHA PEL for respirable dust is calculated as follows [30 CFR 56.500]:

The NIOSH recommended exposure limit (REL) for respirable crystalline silica is 50 µg/m3 as a TWA for up to 10 hours/day during a 40-hour workweek [NIOSH 1974]. This REL is intended to prevent silicosis. However, evidence indicates that crystalline silica is a potential occupational carcinogen [NIOSH 1988; IARC 1987; DHHS 1991], and NIOSH is in the process of reviewing the data on carcinogenicity.

A worker may develop any of three types of silicosis, depending on the airborne concentration of crystalline silica:

Silicosis (especially the acute form) is characterized by shortness of breath, fever, and cyanosis (bluish skin); it may often be misdiagnosed as pulmonary edema (fluid in the lungs), pneumonia, or tuberculosis. Severe mycobacterial or fungal infections often complicate silicosis and may be fatal in many cases [Ziskind et al. 1976; Owens et al. 1988; Bailey et al. 1974]. Fungal or mycobacterial infections are believed to result when the lung scavenger cells (macrophages) that fight these diseases are overwhelmed with silica dust and are unable to kill mycobacteria and other organisms [Allison and Hart 1968; Ng and Chan 1991]. About half of the mycobacterial infections are caused by Mycobacterium tuberculosis, with the other half caused by M. kansasii and M. avium-intracellular [Owens et al. 1988]. Nocardia and Cryptococcus may also cause lung infections in silicosis victims [Ziskind et al. 1976]. Investigations usually show the lungs to be filled with silica crystals and a protein material [Owens et al. 1988; Buechner and Ansari 1969].

After treatment with high-dose corticosteroids and antituberculosis drugs, the driller stabilized and improved slightly until February 1990, when his condition deteriorated. He died of progressive respiratory failure from silicosis in September 1991.

The driller reported that most of the drilling he did before 1983 involved wet techniques to suppress dust. Thereafter he drilled without dust suppression measures and without a respirator, even though the dust was sometimes so thick that he “couldn’t see anything.”

Case No. 2–Acute and Accelerated Silicosis

Discovery of this case of acute silicosis led to a medical survey of nine other drillers who worked for the same company. Two of the workers, aged 28 and 31, had accelerated silicosis and had been drillers for fewer than 6 years. Exposure concentrations are unknown because the crystalline silica content was not measured in the coal dust samples collected during the years 1972-80. However, much of the rock encountered by the drillers was sandstone, which is likely to have had a high crystalline silica content.

Case No. 3–Accelerated and Chronic Silicosis

Seven cases of silicosis in surface miners were reported from a single hospital in West Virginia during the period 1978-88 [Parker et al. 1989]. All cases were in men aged 25 to 51 who were involved with surface drilling for 3 to 19 years.

Five of the drillers suffered from accelerated silicosis: one was infected with Mycobacterium tuberculosis, one had a positive tuberculin skin test without proven active infection, and one had progressive massive fibrosis (a condition in which large areas of lung tissue become scarred and collapse).

The other two drillers suffered from chronic silicosis. Both were in advanced stages of the disease, including progressive massive fibrosis.

A survey of 18 caisson drilling sites in Hong Kong [Ng et al. 1987] identified 12 cases of chronic silicosis among 118 workers exposed to high concentrations of silica. Six of these workers also had active cases of tuberculosis. All 12 workers had 10 to 20 years of occupational exposure.

Site visits showed little evidence of attempts to control dust at the source. For example, dust suppression measures were not used with pneumatic tools, and exhaust ventilation was not supplied in the shafts. In deeper caissons, fresh air was usually supplied by a compressor through a makeshift duct, but the blowing increased airborne dust concentrations. Some dust was suppressed by the natural seepage of water at the bottom of the excavation, and workers at some sites routinely wet the workface to suppress dust.

In the past, reusable cloth masks were commonly used at caisson drilling sites. More recently, however, workers have provided their own particulate filter masks.

The cases of silicosis described in this Alert illustrate the risk of serious or fatal illness in rock drillers and the conditions that favor the development of silicosis. These conditions are as follows:

NIOSH recommends the following measures to reduce crystalline silica exposures in the workplace and prevent silicosis and silicosis-related deaths:

These recommendations are discussed briefly in the following subsections.

Before mining begins, geological reports and other information should be reviewed to determine the potential for exposing workers to crystalline silica during removal of the overburden.

The following personal hygiene practices are important elements of any program for protecting workers from exposure to crystalline silica:

The following measures should be taken to assure that the drillers’ dusty clothes do not contaminate cars, homes, or worksites other than the drilling area:

Respirators should not be used as the only means of preventing or minimizing exposures to airborne contaminants. Effective source controls such as dust-suppression skirts, wet drilling, enclosed cabs, local exhaust ventilation, and good work practices should be implemented to minimize worker exposure to silica dust. NIOSH prefers such measures as the primary means of protecting workers. However, when source controls cannot keep exposures below the NIOSH REL, controls should be supplemented with the use of respiratory protection during rock drilling operations.

The respiratory protection program should be evaluated regularly by the employer.

Table 1 lists the minimum respiratory equipment required to meet the NIOSH REL for crystalline silica under given conditions. Workers should wear the most protective respirator that is feasible and consistent with the tasks to be performed. For additional information about respirator selection, consult the NIOSH Respirator Decision Logic [NIOSH 1987b]. Workers should use only those respirators that have been certified by NIOSH and MSHA [NIOSH 1991].

Signs should be posted to warn workers about the hazard and specify any protective equipment required (for example, respirators). The sample sign in Figure 3 contains the information needed for a silica work area where respirators are required.

NIOSH encourages reporting of all cases of silicosis to the State health departments and to OSHA or MSHA. To enhance the uniformity of reporting, NIOSH has developed reporting guidelines and a surveillance case definition for silicosis (see Appendix). This definition and these guidelines are recommended for surveillance of work-related silicosis by State health departments and regulatory agencies receiving reports of cases from physicians and other health care providers [CDC 1990].

ATS/CDC (American Thoracic Society and Centers for Disease Control) [1986]. Treatment of tuberculosis and tuberculosis infection in adults and children. Am Rev Respir Dis 134(2):355-363.

IARC [1987]. IARC monographs on the evaluation of the carcinogenic risk of chemicals to humans: silica and some silicates. Vol. 42. Lyon, France: World Health Organization, International Agency for Research on Cancer, pp. 49, 51, 73- 111.

State health departments should encourage physicians, including radiologists and pathologists, as well as other health-care providers, to report all diagnosed or suspected cases of silicosis. These reports should include persons with:

A. A physician’s provisional or working diagnosis of silicosis OR

B. A chest radiograph interpreted as consistent with silicosis OR

A. 1. History of occupational exposure to airborne silica dust** AND

A. 2. Chest radiograph or other imaging technique interpreted as consistent with silicosis,*** OR

B. Pathologic findings characteristic of silicosis****

Notes to the Appendix

** Exposure settings associated with silicosis are well characterized and have been summarized in several reviews [Ziskind et al. 1976; Peters 1986]. The induction period between initial silica exposure and development of radiographically detectable nodular silicosis is usually 10 years. Shorter induction periods are associated with heavy exposures, and acute silicosis may develop within 6 months to 2 years following massive silica exposure. [Return to top of appendix]

*** Cases can be classified as simple or complicated. Simple silicosis is present if the largest opacity is less than 1 cm in diameter. Complicated silicosis (also known as progressive massive fibrosis [PMF]) is present if the largest opacity is greater than or equal to 1 cm in diameter. Common radiographic findings of nodular silicosis include multiple, bilateral, and rounded opacities in the upper lung zones; other patterns have been described. Since patients may have had mixed dust exposure, irregular opacities may be present or even predominant. Radiographs interpreted by NIOSH-certified “B” readers should have profusion categories of 1/0 or greater by the International Labour Organization classification system [ILO Committee on Pneumoconiosis 1981]. A bilateral alveolar filling pattern is characteristic of acute silicosis and may be followed by rapid development of bilateral small or large opacities. [Return to body of appendix]