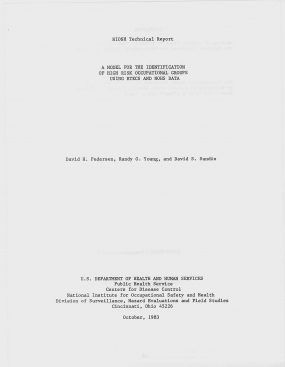 A model for identifying high risk occupational groups was described. The model was based on two databases, the Registry of Toxic Effects of Chemical Substances (RTECS) and the National Occupational Hazard Survey (NOHS). The RTECS was a compilation of toxicological and related data for 45156 chemicals developed by NIOSH. The NOHS contained data on potential worker exposure to chemical agents. The data were obtained in a 2 year study conducted by NIOSH of approximately 5000 nonagricultural businesses in 67 metropolitan areas throughout the United States. High risk chemicals and occupational groups were identified by computer processing of the RTECS and NOHS data using algorithms designed to incorporate data from both sources simultaneously as well as selected data from the Bureau of the Census. The model produced four types of potential health risk indices: the hazard risk index (HRI), the adjusted hazard risk index (AHRI), the industry risk index (IRI), and the occupational risk index (ORI). The HRI was a list of chemicals found in both the RTECS and NOHS databases ranked according to their toxicity. The AHRI was a listing of chemicals found in the RTECS and NOHS files ranked according to their toxicity and extent of worker exposure. The IRI was a listing of industries according to two, three, and four digit standard industrial classifications in the NOHS database ranked according to the potential risk arising from chemical exposure of the workers in each industry. The ORI listed occupations included in the NOHS database ranked according to the potential chemical risk to workers in each occupation. A sample of selected output listings were included in microfiche form.