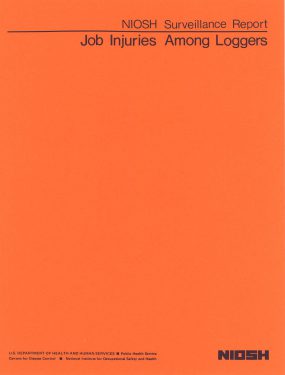 Information concerning injuries, both fatal and nonfatal, occurring among loggers was collected from the National Health Interview Survey, the Social Security Administration Continuous Disability History File, and compensation files, and mortality studies from the states of Washington and California. Regarding geographical differences, the highest accident rates were found in the Western lumber region. Concerning age differences, the highest accident rates were noted among the older loggers. The combinations of injuries most frequently reported among California and Washington loggers were: cuts, lacerations or punctures of the finger, knee or thigh by a saw, 8.4 percent; sprains or strains of the back, knee or ankle due to falls, 6.3 percent; and injuries to the eye, 3.6 percent. Mortality data indicated that in California during the period from 1959 through 1961, 42 deaths were due to injuries from a blow from a falling object whereas one would have been expected based on national mortality tables. In Washington during the period from 1959 to 1971, a total of 368 fatal accidents of this type were recorded compared to an expected 34 deaths. One fourth of all accidental deaths among loggers resulted from blows caused by falling objects. Questions for further study involve the importance of the environment, the age of the workers, the characteristics of the chain saws and other equipment, the effect of training programs, the importance of worker behavior, and the use of personal protective equipment in exacerbating or limiting the number of fatal and nonfatal injuries occurring in this industry.