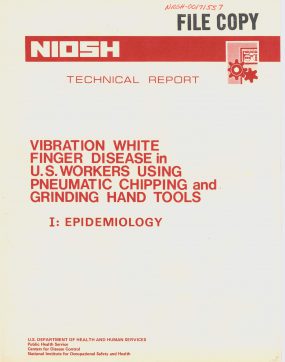 An epidemiologic study of vibration white finger (VWF) disease in United States workers using pneumatic chipping and grinding hand tools was conducted. The cohort consisted of 235 workers at two gray-iron foundries and a shipyard who used pneumatic chipping and grinding tools in their present jobs and who did not have any confounding past exposures. The comparisons consisted of 72 workers who had never used a vibrating hand tool. Occupational and medical histories were taken. Medical examinations that focussed on the hands and fingers were given. The subjects completed questionnaires that sought information on symptoms such as finger blanching, numbness, or tingling. Temperature, pain, and light touch sensory tests were performed on each subject. The incidence of primary Raynaud’s disease in the cohort was 2.6 percent. Forty seven percent of the exposed foundry workers and 19 percent of the exposed shipyard workers had VWF. None of the comparisons had Raynaud’s disease or VWF. The tip of the middle finger was affected to the greatest extent by tingling, numbness, and blanching. The proximal segment of the thumb was least affected by tingling, numbness, and blanching. The median latency for blanching was 1.4 years in the foundry workers and 16.5 years in the shipyard workers. The latencies for tingling and numbness were shorter. VWF was not associated with age. The severity of each stage of VWF was significantly, positively correlated with the number of years the foundry and shipyard workers used chipping tools. Hourly workers had the highest incidence of mild VWF, stage 00. Workers who were employed on a piece work basis had the highest incidence of severe VWF, stages 02 and 03. The results of the sensory tests for temperature, pain, and light touch were significantly associated with the stages of VWF on a population basis, but not on an individual basis. The authors conclude that using pneumatic chipping and grinding hand tools for prolonged times is a significant risk factor for VWF in the populations studied.