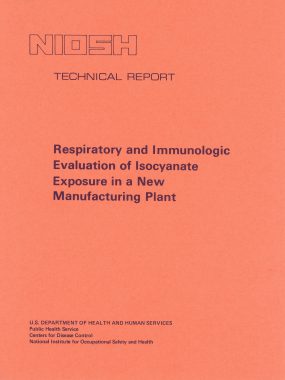 The long term respiratory and immunologic effects of occupational exposure to toluene-diisocyanate (584849) (TDI) were studied in humans. A total of 277 production workers in a TDI manufacturing facility completed respiratory and health questionnaires and were examined spirometrically and immunologically before initial TDI exposure and at various intervals during 5.5 years of continuous or intermittent occupational exposure. Cumulative exposure for each worker was measured by personal samples, and those exposed to an average of 0.0682 part per million months (ppm/month) or less were classified as Group 1, while workers exposed to higher concentration were designated Group 2. About 4 percent of the exposed workers developed bronchial hypersensitivity to TDI, and 75 percent of reactive workers developed their sensitivity within 9 months of initial exposure. During about 0.8, 3.0, and 14.6 percent of total occupational exposure time, atmospheric TDI concentrations were above 0.08, 0.02, and 0.005ppm, respectively. The average annual decline in forced expiratory volume (FEV) for all exposed workers was 24 milliliters (ml), not significantly different from FEV decline in nonexposed smoker populations. The mean FEV decline in Group 2 workers who had never smoked was 38ml greater than the mean FEV decline in Group 1 employees who had never smoked. The average declines in single breath carbon-monoxide diffusing capability and in median forced expiratory flow were significantly different from control for both groups, and these pulmonary function decreases were related to cumulative TDI exposure. Immunologic reactivity to TDI exposure occurred in about 4 percent of all exposed workers. The authors conclude that the respiratory effects of TDI exposure are masked in smokers but are significant in nonsmokers.