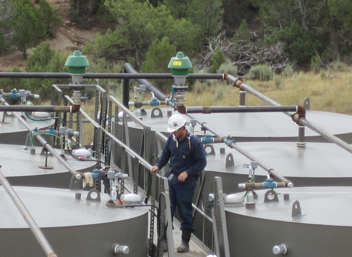 Workers at oil and gas extraction sites are at risk for exposure to hydrocarbon gases and vapors, oxygen-deficient atmospheres, and fire and explosions when opening tank hatches to manually gauge or collect fluid samples from crude oil and waste water storage tanks. Gauging and sampling is performed to determine the quantity and quality of crude oil prior to its sale or transfer. Opening tank hatches can result in the rapid release of high concentrations of hydrocarbon gases and vapors. These exposures can have immediate health effects, including loss of consciousness and death.

Nine worker deaths associated with manual tank gauging or the collection of fluid samples were identified during 2010-2014 by a team of researchers consisting of an occupational medicine physician and experts from the National Institute for Occupational Safety and Health (NIOSH) and the Occupational Safety and Health Administration (OSHA). Exposures to high concentrations of hydrocarbon gases and vapors and/or the displacement of oxygen are believed to be the primary or contributory factors in each death.

All nine deceased workers found at production tanks were working alone at the time of their death. The circumstances of these cases were supported by wellsite exposure assessments conducted by NIOSH and OSHA during 2013-2014 that found opening tank hatches and manually gauging or sampling from crude oil tanks can result in oxygen deficient environments and hydrocarbon concentrations that are immediately dangerous to life and health.

The nine fatalities identified by NIOSH and its partners, and the wellsite exposure assessment studies, identified and described a new and emerging hazard. That research was the basis for a number of communication products including two NIOSH Science blogs1-2, a NIOSH Fatalities in Oil and Gas (FOG) database web report3, two hazard alerts4-5, a CDC report6, and numerous presentations to stakeholders. The development of these products was the result of collaboration among a diverse group of stakeholders including NIOSH, OSHA, the National STEPS Network, trade groups, and representatives from the oil and gas extraction industry.

In response to the identification of this hazard by NIOSH and its partners, the American Petroleum Institute (API) developed and published a new safety standard, the Custody Transfer of Crude Oil from Lease Tanks Using Alternative Measurement Methods7, contained in the API Manual of Petroleum Measurement Standards. This new standard describes alternative methods for measuring the quantity and quality of crude oil without opening the tank hatch, thus protecting workers from exposure to hydrocarbon gases and vapors.

In October 2016, the Department of the Interior’s Bureau of Land Management (BLM) issued the first major update of rules for oil measurement on Federal and Indian leases in over 25 years8. The new regulation incorporates API’s standard on alternative measurement methods. Prior to the update, oil and gas companies had to apply for variances to use alternative measurement methods for gauging and sampling. The update to the rules allows companies to use measurement systems and automatic tank gauging systems without having to obtain variances from BLM. The rule also includes a more streamlined process for approving new technology as it is developed. Now, oil and gas companies can more easily implement safer alternatives for gauging tanks on these leases.

For more information about the National Institute for Occupational Safety and Health (NIOSH) Oil and Gas Extraction Research Program visit www.cdc.gov/niosh/programs/oilgas/. Information specific to worker deaths associated with manual tank gauging and the collection of fluid samples can be found on the NIOSH Fatalities in the Oil and Gas Extraction Industry (FOG) website: www.cdc.gov/niosh/topics/fog/.