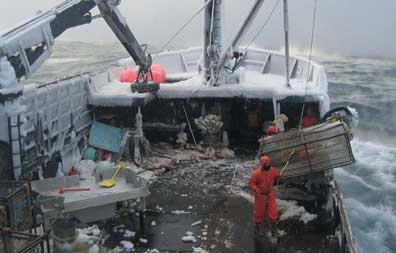 A typical day crab fishing on the Bering Sea in Alaska. Photo courtesy of Mike Fourtner.

Commercial fishing is, by any measure, a dangerous occupation. Brutal environmental conditions lead to hazards in every part of the work environment: slip/trip hazards, contact injuries from fishing gear entanglement, vessel losses and falls overboard.

In 1990, NIOSH began working closely with industry partners to address the high number of fishing fatalities in Alaska. By focusing on fishery-specific hazards such as vessel overloading in the crab fleet, fatality rates have been reduced 42%.1 Beginning in 2007, NIOSH expanded this approach to identify specific regional hazards for the rest of the country by collecting risk factor information for fatalities and creating the Commercial Fishing Incident Database. In 2008, NIOSH researchers conducted a personal flotation device (PFD) study with over 400 fishermen to identify PFDs that are comfortable to work in for several gear types.

These rate reductions and high profile research programs with industry partners set the stage for NIOSH’s opportunity to affect fishing safety policy on a national level.

In 2010, the National Transportation Safety Board (NTSB) asked NIOSH to participate in the Fishing Vessel Safety Forum held in Washington, DC. The NTSB used NIOSH research presented during the forum to develop recommendations for improving commercial fishing safety. NIOSH research was cited in the recommendations published by the NTSB in November 2011.3 The recommendations address practices to decrease fatalities due to the two leading causes of death among fishermen as identified by NIOSH research: vessel loss from instability and fatalities from man overboard events.

The NTSB recommendations to the US Coast Guard include the requirement for training in stability for vessel owners and skippers, and mandatory use of flotation aids for workers while on deck. Skippers and crew are also encouraged to be trained in man overboard recovery techniques and show certification in these areas prior to each season. Enactment of these recommendations would support the long-term NIOSH National Occupational Research Agenda (NORA) goals to reduce vessel sinking and man overboard fatalities in commercial fishing by 50% by 2018.4

NIOSH researchers continue to work with industry, safety personnel, US Coast Guard, and policy makers to improve occupational safety for commercial fishermen. Ongoing efforts include collection and analysis of nationwide fatality data, development and evaluation of engineering interventions to prevent vessel loss from downflooding and instability, and communication efforts to encourage use of PFDs while working on deck. These research-to-practice measures and collaborative efforts will improve the safety of fishermen nationwide and insure safe and productive seasons in all fisheries around the country.