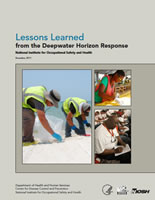 The explosion on the Deepwater Horizon disaster oil rig on April 20, 2010 resulted in the death of 11 workers and injury to another 17 workers. In the weeks and months after, as large amounts of crude oil released from the Macondo Well, tens of thousands of workers engaged in on- and off-shore containment and clean-up activities. Addressing concerns about the potential effects of the spill on human and environmental health in the Gulf, including potential risk to response workers, prompted an unprecedented response from agencies all across the Federal government.