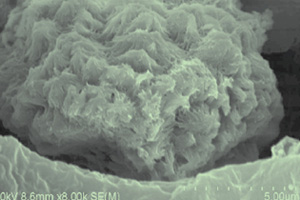 Nanotechnology has the potential to revolutionize countless products, create computers smaller and faster than once could be imagined, and fight diseases such as cancer. According to the Project on Emerging Nanotechnology, by the summer of 2009 there were 1,015 consumer products using nanotechnology. That represents nearly a 19-fold increase over the 54 products listed in 2005. Nanotechnology involves the manipulation of matter at a near-atomic scale. Nanoparticles measure from 1 to 100 nanometers in size, with 1 billion nanometers forming a meter. For comparison, a billion inches would nearly circle the Earth 2 times.

A nanoparticle of a certain material can behave much differently than a larger, more familiar-sized particle of the same material. Early research shows that materials that enter the body as nano-sized particles may have harmful health effects, even for some materials previously considered safe at larger sizes.

The National Institute for Occupational Safety and Health (NIOSH) is a leader in researching the health effects that nanoparticles may have on workers who handle them and who are exposed to them. NIOSH recently published research that measured for the first time the health effects of inhaling a common nanoparticle, the single-walled carbon nanotube. In this study, researchers examined what happens when mice breathe in carbon nanotubes.

Previously, scientists studied mice by using aspiration, or mixing the nanotubes in a fluid that is then delivered into the respiratory system of the mice. The aspiration experiments found that the immune system reacted to nanotubes in the same way as an infection. Strong inflammation produced swelling, scarring, and genetic mutations to cells in the lungs of the mice. There were two major critiques of the aspiration research. First, nanotubes were introduced into the lung as a single bulk amount, and second, the particles tended to clump together when mixed in the fluid. Researchers wondered what effects would be produced by inhalation of the particles because nanotechnology workers can be exposed to situations where they could breathe in particles in the air.

To effectively answer this question, NIOSH scientists invented a way to suspend nanotubes in air so the concentration of particles could be carefully controlled. This was a true breakthrough because it was the first time a well-characterized controlled aerosol of a carbon nanotube had been generated. Mice were then placed into a carefully controlled environment where they would breathe the air containing the particles. Scientists studied the effects of this exposure after 1, 7, and 28 days. Although the effects were similar, these new results demonstrated that carbon nanotubes were more potent when inhaled than when aspirated. In addition, this research has shown early indications of serious health outcomes that may have longer term effects such as cancer, and therefore, ongoing research is important to more clearly understand the implications of exposure to carbon nanotubes. This study and continued NIOSH research could soon help the development of occupational safety and health recommendations for carbon nanotubes that will protect the health of nanotechnology workers.