Older Drivers in the Workplace: Crash Prevention for Employers and Workers 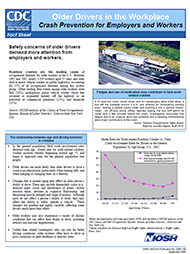 Roadway crashes are the leading cause of occupational fatalities for older workers in the U.S. Between 1992 and 2002, nearly 3,200 workers aged 55 years and older died in motor vehicle crashes on public highways, accounting for 22% of all occupational fatalities among this worker group. Other leading fatal events among older workers were falls (14%), nonhighway motor vehicle crashes (those that occurred or originated entirely off the highway or on industrial or commercial premises) (12%), and homicide (11%).