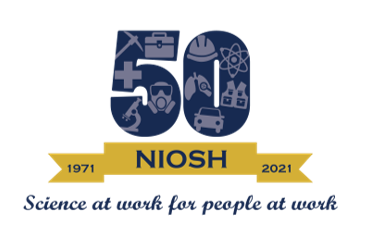 2021 marks the 50th anniversary of NIOSH. Created by the Occupational Safety and Health (OSH) Act of 1970, NIOSH was established as a separate and independent research program to create objective scientific research findings in the field of occupational safety and health.

NIOSH will be recognizing this important milestone through various channels throughout the year and posting links to them below.

Join us on May 11, 2:00 pm -3:30 pm (EDT) for the presentation “Looking Back: The Important Role of Science in Fulfilling the Occupational Safety and Health Act.” This webinar will feature current and past NIOSH leaders discussing key scientific accomplishments during their tenure. You must register in advanceexternal icon for this Zoom webinar.

April 8 – Taking it to the Streets… and the Mines

From the Director’s Desk: NIOSH Looks at 50

Research Rounds: For the NIOSH 50th Anniversary, please enjoy this limited time series, “NIOSH Then” where we look back at research efforts inside and outside of NIOSH from the past 50 years.

As part of the 50th anniversary, NIOSH welcomes current and past partners to highlight successes and accomplishments, resulting from collaborations with our institute. Check out the information below from some of our partners who are recognizing this milestone and showcasing their NIOSH partnerships. Please contact Donjanea Williams (xzn3@cdc.gov), if you would like to join NIOSH in recognizing five decades of improving the occupational safety and health of workers and transferring new knowledge into practice.

National Toxicology Program Honors NIOSH 50th Anniversary
The National Toxicology Program (NTP) recently highlighted its common goals and collaborative research with NIOSH in recognition of the institute’s 50thanniversary via a recent articleexternal icon in the Environmental Factor. Read more about NTP’s accomplishments and partnership with NIOSH in this newsletter published by the National Institute of Environmental Health Sciences. A recent NIOSH Science Blog and the American Industrial Hygiene Association’s The Synergist newswireexternal icon also featured this collaboration.

The Occupational Safety & Environmental Health Program Marks 40 Years at Millersville University
Millersville University held an online event April 28 to celebrate the 40th anniversary of its Occupational Safety & Environmental Health Program—a program that is 1 of the 28 recipients of the NIOSH-funded Training Project Grant. The day-long program, which was recorded, featured presentations by leading safety professionals, as well as panel discussions, breakout sessions, tours, and interactions with current students. The program also recognized its partnership with NIOSH during this milestone event. You view can on the Millersville University websiteexternal icon.external icon

Afternoon of Science – NIOSH 50th Anniversary Celebration
West Virginia University’s Office of Research and Graduate Education is hosting the “Afternoon of Science – NIOSH 50th Anniversary Celebration”. This event will celebrate the NIOSH 50th anniversary and showcase the university’s accomplishments through its various partnerships with NIOSH through grants and other collaborations. The online event happens May 5, 2021, 2:00 p.m. – 3:00 p.m. (EDT). For more information visit, https://www.hsc.wvu.edu/news/story?headline=afternoon-of-science-niosh-50th-anniversary-celebrationexternal icon.

Southwest Ag Center Recognizes 25-Year Partnership With NIOSH
This year marks the 25th anniversary of the Southwest Center for Agricultural Health, Injury Prevention and Education (SW Ag Center) -one of 11 NIOSH-funded Centers for Agricultural Safety and Health (Ag Centers). The SW Ag Center, located at the University of Texas Health Science Center at Tyler, is recognizing this milestone and its long-standing partnership with NIOSH. The University of Texas Health Science Center at Tyler highlighted the center’s successes as a NIOSH grantee in its magazine, The Shieldexternal icon. The center also recognized the NIOSH 50th in its SWAGbitesexternal icon newsletter and featured a timeline of its NIOSH-funded research over the past 25 years.

NIOSH’s 50th Anniversary and Our Impact Through Partnership
Check out this blogexternal icon from the Center for Health, Work & Environment at the Colorado School of Public Health, which recognizes its various accomplishments in occupational safety and health and worker well-being through its NIOSH-funded Education and Research Center and Center of Excellence for Total Worker Health®. This blog was created in recognition of the NIOSH 50th anniversary.

Success of a Long-Term Partnership Focused on Workplace Violence
The University of Iowa Injury Prevention Research Center is highlighting its collaboration with NIOSH over the past few decades through a one-pager on the achievements of this partnership in workplace violence. Through varied NIOSH grants, the center has been able to address this issue, which is the third leading cause of U.S. on-the-job deaths.

Reflecting Back: The Partnership between Oregon State University and NIOSH Western States Division
For the NIOSH 50th anniversary, Oregon State University captured its collaboration with the NIOSH Western States Division through a timelineexternal icon on its website. This university’s partnership with NIOSH, which is focused on commercial fishing, has been ongoing for nearly a decade.

2021 NIOSH Bibliography
Each year the NIOSH Bibliography highlights the institute’s accomplishments of the prior year. The 2021 edition however, also celebrates NIOSH’s progress over the first 50 years, from its publication of the NIOSH Pocket Guide to Chemical Hazards and evaluations of firefighter and other worker deaths to its administration of the World Trade Center Health Program and support of responder and workforce safety in crises such as the Deepwater Horizon oil spill, Ebola outbreak, and COVID-19 pandemic.

Related Wikipedia Articles
As part of the 50th anniversary, NIOSH is creating Wikipedia articles on PHS and NIOSH history topics.