CDC’s single largest investment in HIV prevention and a central component of its HIV prevention strategy is providing funding to health departments.i The funding cycle that began in Fiscal Year (FY) 2012 represented a new direction in achieving a higher level of impact with every federal HIV prevention dollar. Beginning in 2012, CDC ensured that prevention dollars were better matched to the HIV burden in every state, territory, and heavily affected city, and it focused on HIP.

Many of CDC’s partners in the HIV prevention community provided input to guide this new approach. Their participation was essential in developing key elements of the funding opportunity, including a minimum funding level for all jurisdictions, introduction of competitive funding for innovative demonstration projects, and continuation of direct funding for heavily affected cities. This new approach to funding better matched resources to those geographic locations with the highest burden of HIV. With this shift, funding was directed to four core areas demonstrated to be high impact, as follows:

Additionally, ≤25% of core prevention funding could be used to support other proven-effective HIV activities, including evidence-based interventions for populations at high risk; social marketing, media, and mobilization; and pre- and post-exposure prophylaxis activities (not medications).

Funding was apportioned to each state, territory, or directly funded city based on the number of people reported to be living with an HIV diagnosis in that jurisdiction – a change from prior health department funding allocations that were based on AIDS cases, which was no longer the best indicator for burden of disease. The overall CDC funding was $359 million annually during fiscal years 2012-2016.

The next 5-year funding cycle, which began on January 1, 2018, integrated HIV surveillance and prevention funding for health departments.ii This program will serve as a cornerstone of national HIV prevention efforts in the coming years and builds on successes and lessons learned from CDC’s previous health department funding awards for 2012-2017. Most importantly, it integrates HIV prevention and surveillance, allowing health departments to plan and execute more efficient, coordinated, and data-driven prevention efforts. It prioritizes proven, cost-effective strategies with the greatest potential to reduce new infections, including:

As was done with the previous funding opportunity, CDC apportioned funding to each state, territory, or directly funded city based on the number of people reported to be living with an HIV diagnosis in that jurisdiction as of 2014, the most recent year for which complete data were available (see map). In addition, allocations were based on the most recent known address for each person living with HIV rather than their residence at the time their infection was first diagnosed, to account for geographic mobility.  Finally, every eligible jurisdiction was allocated a minimum of $1 million, an increase from previous years to address the needs of jurisdictions to meet the minimal requirements of the funding opportunity.

Evaluation of the funding program after the first 2 fiscal years (FY2012–FY2013) demonstrated progress made toward goals, even during the initial transition years of the funding opportunity announcement.iii As the map shows, the current funding levels match the proportion of Americans living with HIV diagnoses. 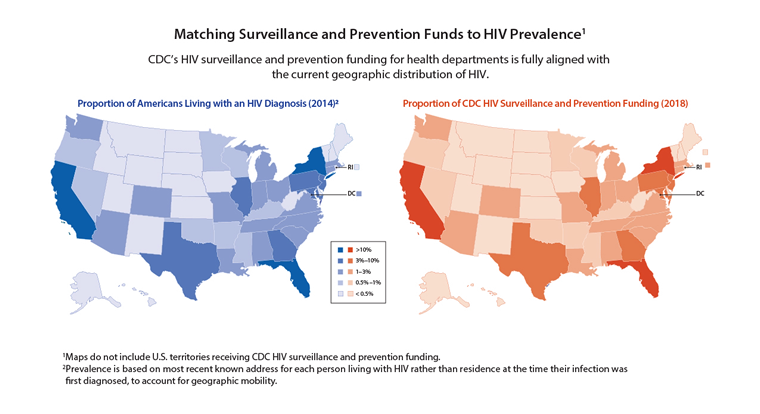 Matching Surveillance and Prevention Funds to HIV Prevalence by Recipient1

1 Maps do not include U.S. territories receiving CDC HIV surveillance and prevention funding.

2 Prevalence is based on most recent known address for each person living with HIV rather than residence at the time of their infection was first diagnosed, to account for geographic mobility.