What is Vitamin K Deficiency Bleeding?

What is vitamin K and why is it important?

Vitamin K is a substance that our body needs to form clots and to stop bleeding.  We get vitamin K from the food we eat.  Some vitamin K is also made by the good bacteria that live in our intestines. Babies are born with very small amounts of vitamin K stored in their bodies, which can lead to serious bleeding problems if not supplemented.

What is Vitamin K Deficiency Bleeding or VKDB?

Vitamin K deficiency bleeding or VKDB, occurs when babies cannot stop bleeding because their blood does not have enough Vitamin K to form a clot. The bleeding can occur anywhere on the inside or outside of the body.  When the bleeding occurs inside the body, it can be difficult to notice.  Commonly, a baby with VKDB will bleed into his or her intestines, or into the brain, which can lead to brain damage and even death. Infants who do not receive the vitamin K shot at birth can develop VKDB at any time up to 6 months of age. There are three types of VKDB, based on the age of the baby when the bleeding problems start: early, classical and late. More information about these types is included below. 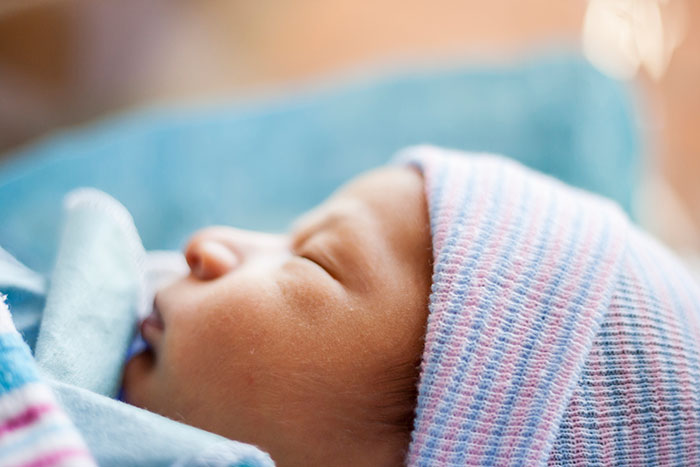 Why are babies more likely to have vitamin K deficiency and to get VKDB?

All infants, regardless of sex, race, or ethnic background, are at higher risk for VKDB until they start eating regular foods, usually at age 4-6 months, and  until the normal intestinal bacteria start making vitamin K. This is because:

What can I do to prevent my baby from getting vitamin K deficiency and VKDB?

The good news is that VKDB is easily prevented by giving babies a vitamin K shot into a muscle in the thigh.   One shot given just after birth will protect your baby from VKDB.  In order to provide for immediate bonding and contact between the newborn and mother, giving the vitamin K shot can be delayed up to 6 hours after birth.

Is the Vitamin K shot safe?

Yes.  Many studies have shown that vitamin K is safe when given to newborns.   For more information about the safety of the vitamin K shot, please see our FAQ’s.

What might cause babies to be deficient in vitamin K and have bleeding problems?

Some things can put infants at a higher risk for developing VKDB. Babies at greater risk include:

How often are babies affected with vitamin K deficiency bleeding?

Since babies can be affected until they are 6 months old, healthcare providers divide VKDB into three types; early, classical and late.   The chart below helps explain these three different types.

What things should I look for in my baby if I think he or she might have VKDB?

Unfortunately, in the majority of cases of VKDB, there are NO WARNING SIGNS before a life-threatening event starts.  Babies with VKDB might develop any of the following signs: