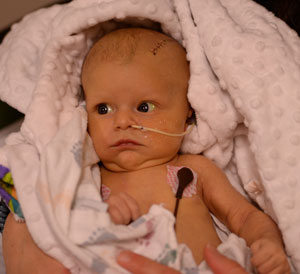 Olive was breathing and her heart was beating, but she was otherwise non-responsive. She was fitted with an IV, had blood drawn, and even had a lumbar puncture to help the doctors figure out what was going on. It turned out there was blood in the fluid that they pulled from her lumbar puncture, so they were going to get MedStar to bring her to the pediatric ICU at Sacred Heart, where they were better equipped to handle whatever was going on.  The pediatric intensivist came and asked me if we had given our daughter a Vitamin K shot at birth, and I just stared at him and said I had no idea. He said they needed to bring her in for a CT scan, but every time they tried to place an IV (which she needed before she went for the scan), the vein would blow. Finally, they found a vein, got the IV in, and moved her downstairs to the CT scan.  The doctor explained that a clot had developed which was placing immense pressure on Olive’s brain. Not only that, but there was bleeding on the back of the right side of her brain as well. The water pockets that are within the brain were completely destroyed, and the tissue on the left side of the brain looked damaged. He said that the lack of Vitamin K in Olive’s system resulted in her blood not being able to clot. Anything as small as putting her down in her bed could have caused this bleed. Since she couldn’t clot, the bleeding didn’t stop. 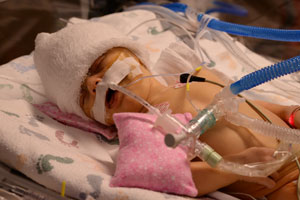 The only way to get Olive into the surgery that she needed to remove the clot was to get her to start clotting everywhere else, and the only way to do that was to pump her full of plasma and Vitamin K. The doctor wasn’t sure how long she would take to start clotting, or if it would happen soon enough to make the surgery worthwhile. Even then, the surgery was incredibly dangerous, and there were very few studies of it being done on such a young person (she had turned one month just the day before). There was a chance that if the pressure on her left side was removed too quickly, the entire right side would be damaged as well. Olive began clotting a little over an hour after they began her Vitamin K treatment. Our decision now was whether we should have her undergo the risky surgery, or see if the clot would resolve on its own. We felt the surgery was the best option and it began just after 2 AM. Our little girl survived the surgery and it was a success.

This may be the hardest part of Olive’s story that I will write. The part where I admit that what happened to her was nearly 100% preventable. And yet it happened.  It happened because she didn’t receive her dose of Vitamin K when she was born.  I spent the first few days that she was in the hospital blaming myself. I ran through the situation in my mind, trying to understand why I would say “No” to something that would keep my daughter from being in this much pain. In Olive’s situation, unfortunately, it was largely accidental. That didn’t stop me from feeling guilty, however, and only recently did I accept that although this happened to Olive, it doesn’t have to happen to another person’s baby.  Olive was born in a birth center. I loved the experience that I had there and to this day, I hold no hard feelings against the wonderful midwives that were present when she was born. A few weeks before her birth, we went over the routine shots that infants are given in the hospital, and decided whether or not Olive would receive them. For most of these I knew my answer, but since I knew nothing about the Vitamin K shot, I decided to do my research and then decide at the birth what I would do.  When I began hemorrhaging after Olive’s birth, the discussion of the shot was completely forgotten, and she ended up not getting it. After all, things that are deemed to be optional are probably not essential – right? As it turns out, the Vitamin K shot should not be optional. 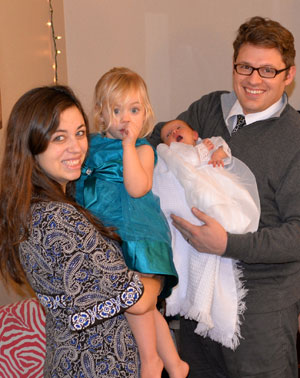 So, why are people saying no to the Vitamin K shot?  For some, there is the belief that the shot is correlated with an increased likelihood of leukemia. Although there was a study done in 1992 that determined that this was true, subsequent studies have proved that there is no correlation between Vitamin K and any cancers.  There is also debate about causing pain to a newborn, by giving them a shot shortly after they are born. All I can say for that is this – the pain that Olive endured from the results of her Vitamin K deficiency are so much more than any pain she would have had as a result of a quick shot at birth.  And although some argue that the shot is an unnecessary medical intervention, the number of medical interventions that will occur if your child has a brain bleed when they stop clotting are substantially more significant.  What it comes down to is that giving your child a shot of Vitamin K at birth is a small price to pay, especially when the cost of rejecting the shot can be severe brain injury and death.  I can’t change what happened to Olive, but I can try to prevent it from happening to another baby.