COVID-19 can cause asymptomatic and mild illness, particularly among young, healthy populations.

Transmission of SARS-CoV-2 during and after a college spring break trip (March 14–19) led to 64 cases, including 60 among 183 vacation travelers, one among 13 household contacts, and three among 35 community contacts. Prompt epidemiologic investigation, with effective contact tracing and cooperation between a university and a public health department, contributed to outbreak control.

A coordinated response with contact tracing and testing of all contacts, including those who are asymptomatic, is important in controlling future COVID-19 outbreaks that might occur as schools and universities consider reopening. 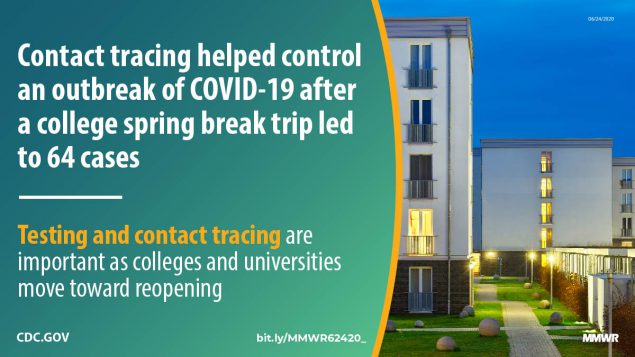 On March 27, 2020, a University of Texas at Austin student with cough, sore throat, and shortness of breath had a positive test result for SARS-CoV-2, the virus that causes coronavirus disease 2019 (COVID-19). On March 28, two more symptomatic students had positive test results, alerting the COVID-19 Center at the University of Texas Health Austin (UTHA) to a potential outbreak; the center initiated an outbreak investigation the same day. UTHA conducted contact tracing, which linked the students’ infections to a spring break trip to Cabo San Lucas, Mexico, during March 14–19. Among 231 persons tested for SARS-CoV-2 in this investigation, 64 (28%) had positive test results, including 60 (33%) of 183 Cabo San Lucas travelers, one of 13 (8%) household contacts of Cabo San Lucas travelers, and three (9%) of 35 community contacts of Cabo San Lucas travelers. Approximately one fifth of persons with positive test results were asymptomatic; no persons needed hospitalization, and none died. This COVID-19 outbreak among a young, healthy population with no or mild symptoms was controlled with a coordinated public health response that included rapid contact tracing and testing of all exposed persons. A coordinated response with contact tracing and testing of all contacts, including those who are asymptomatic, is important in controlling future COVID-19 outbreaks that might occur as schools and universities consider reopening.

With oversight from a university epidemiologist and infectious diseases physician, UTHA trained medical students, public health students, and clinical and research staff members to trace contacts. UTHA contact tracers communicated with travelers and contacts by telephone, first texting an initial message about the potential exposure and then attempting to call each traveler and contact up to three times. Through interviews with travelers and contacts, the date and method of return travel (i.e., commercial or charter flight and flight number for those who traveled to Cabo San Lucas), date of last exposure to a patient with known COVID-19, presence of symptoms, symptom onset date, and current address were collected and recorded. For those travelers and contacts without symptoms, the date of testing was used as a proxy for symptom onset date to estimate an infectious period. During the telephone call, contact tracers advised asymptomatic travelers and contacts to self-quarantine and self-monitor for symptoms for 14 days from the last potential exposure date. Symptomatic travelers and contacts were offered a SARS-CoV-2 test and asked to self-isolate until either a negative test result was obtained or, following CDC recommendations at the time, until 7 days after symptom onset, including 3 days with no fever and no worsening of symptoms. Following CDC guidance at the time,* persons were considered symptomatic if they had a documented temperature of ≥100.0°F (37.8°C) or reported subjective fever, acute cough, shortness of breath, sore throat, chills, muscle aches, runny nose, headache, nausea, vomiting, diarrhea, or loss of sense of smell or taste. In addition, travelers and contacts were offered the opportunity to enroll in a home-monitoring program developed by UTHA in partnership with Sentinel Healthcare.† During the contact tracing interview, data were recorded and stored in a secure, online drive.

If testing was recommended, UTHA nurses used a person-under-investigation (PUI) form to collect information on symptom status, any underlying medical conditions, and smoking status§ before scheduling a test. Nasopharyngeal swab specimens were collected at UTHA’s drive-through testing site. A private reference laboratory in Austin, Texas, conducted RT-PCR testing on collected samples using a cobas SARS-CoV-2 qualitative assay (Roche Molecular Systems, Inc.), which was given emergency use authorization by the Food and Drug Administration.¶ For those who were not residing in Austin but were recommended for testing, Austin Public Health passed on their information to the appropriate public health jurisdiction. Once a traveler or contact had a positive test result, further identification of contacts was conducted. Because of the limited number of tests available at the time, travelers and contacts were only tested once.

By March 30, nine of the first 19 travelers and contacts tested had a positive test result. Because approximately one half of persons identified and tested had a positive test result 2 days into the investigation, testing criteria were broadened to include any traveler to Cabo San Lucas, regardless of symptom status, but only symptomatic contacts continued to qualify for testing. Based on the SARS-CoV-2 incubation period of 14 days from date of exposure (1), the presumptive incubation period that began on March 19 when travelers returned from Cabo San Lucas ended on April 2. Therefore, after April 2, testing was only performed for exposed, symptomatic travelers and contacts. The investigation ended on April 5 when the last symptomatic contacts received negative test results.

Descriptive statistics and bivariate analyses were performed using Stata (version 16; StataCorp). Unadjusted logistic regression models were used to calculate odds ratios (ORs) and 95% confidence intervals (CIs), which were used to evaluate differences in symptoms and smoking status between persons who did and did not have positive SARS-CoV-2 test results. Because seven contacts and travelers had testing for SARS-CoV-2 performed at other sites and PUI forms were incomplete for 26, data on symptoms and underlying medical conditions are missing for 33 (14%) persons.

Among 298 persons identified during the investigation, 289 (97%) were interviewed. Contact tracing interviews revealed that Cabo San Lucas travelers used a variety of commercial, charter, and private flights to return to the United States. Although the index patient whose illness started the investigation was not symptomatic until after arriving home (March 22), other travelers experienced symptoms during March 15–19 while in Cabo San Lucas (Figure). Further, many Cabo San Lucas travelers reported prolonged exposure and reexposure to multiple other travelers because they shared hotel rooms in Mexico and apartments or other shared living spaces upon return to Austin.

The UTHA COVID-19 Center, a novel university–public health partnership established with the local public health entity, Austin Public Health, led the outbreak response. During the early stage of the pandemic in March, resources among institutions were pooled to improve the capacity to identify and interview a large number of travelers and contacts, to facilitate testing, and to follow travelers and contacts. University Health Services coordinated additional support for students’ housing, food, and other needs during isolation and quarantine.

In addition, concurrent actions at the university level and across Austin aimed at limiting COVID-19 spread in the community were undertaken, including rapid contact tracing, a municipal shelter-in-place order on March 25 (Figure), the university’s extension of spring break by a week, and a transition to remote learning when operations resumed on March 30. Austin Public Health and University of Texas Austin publicized the ongoing investigation on March 31 and April 3, respectively, and encouraged community members to avoid nonessential travel and seek testing if they had symptoms. UTHA also provided updates about the ongoing investigation to the UTHA community through email.

No constellation of symptoms was diagnostic of COVID-19 in this population. Similar proportions of fever, cough, sore throat, and headache occurred among persons with positive test results and those with negative results. Because testing supplies were limited, only symptomatic persons were tested during March 28–30. Some persons might have reported symptoms as a means to get tested during that time. A possibility also exists that a separate, concomitant respiratory illness occurred among travelers and contacts in March that might explain the similarities in symptoms between those who had positive test results and those who had negative results. Although persons with negative SARS-CoV-2 test results in this analysis were not tested for influenza or other respiratory illnesses, widespread transmission of influenza was reported by the U.S. Department of Health and Human Services during March 8–March 21.** Recent studies have demonstrated variability in symptoms such that strict implementation of guidance that emphasizes a symptom-based approach to COVID-19 testing could result in missing a diagnosis of COVID-19 in a sizeable proportion of cases (7,8).

During contact tracing interviews, Cabo San Lucas travelers reported sharing housing in both Mexico and upon return to Austin. The proximity created by this shared housing likely contributed to transmission through ongoing exposure and reexposure to SARS-CoV-2. This pattern of social interaction, in which residents gather frequently to socialize and share facilities, is common among many college-aged persons and might lead to propagated spread, similar to the continued person-to-person transmission observed in long-term care facilities (5). The prevalence of shared housing and prolonged exposure experienced by the college-aged Cabo San Lucas travelers highlights the importance of universities and schools considering how to align students’ living arrangements with CDC recommendations for living in shared housing†† as they plan to reopen.

The findings in this report are subject to at least five limitations. First, the majority of students were only tested for SARS-CoV-2 once because of limited test availability at the time; therefore, some asymptomatic or presymptomatic cases might have been missed. Second, seven travelers and contacts did not reside in Austin and were tested elsewhere. For these seven, investigators relied upon self-reported test results, and information on demographic characteristics and symptoms was not available. Third, a number of PUI forms had missing information regarding demographic characteristics, symptoms, or underlying health conditions. Although it is possible that the missing information regarding symptoms and underlying health conditions could influence the prevalence of symptoms seen in this investigation, the variability of reported signs and symptoms is consistent with what has been published in recent literature (7,8). Fourth, the diagnostic sensitivity of the RT-PCR test used is not yet known. Although this particular RT-PCR test demonstrates an analytic sensitivity of 95% at concentrations of 46 copies of virus/mL, the first systematic reviews suggest that similar RT-PCR tests are demonstrating a false-negative rate of 2%–29%§§ (9). Finally, the significant overlap between students who went on the trip together and those who shared living quarters after returning to Austin made it difficult to estimate accurate primary and secondary infection rates.

As schools and universities make decisions about reopening, it is important that they plan for isolating and testing persons with suspected COVID-19, quarantining their contacts, and implementing suggestions described in CDC’s Considerations for Institutes of Higher Education.¶¶ Coordination between educational institutions and health authorities can facilitate rapid identification of cases, contact tracing, active surveillance, and identification of clusters. Contact tracing and testing of close contacts, regardless of symptoms, is important in limiting spread, especially in young and healthy populations living in shared housing and in controlling future COVID-19 outbreaks that might occur as schools and universities consider reopening.

§ Smoking status includes reported use of either combustible cigarettes, e-cigarettes, or both.

* For asymptomatic cases, date of testing is used as a proxy for date of symptom onset.