Meningococcal Disease in Other Countries

Meningococcal disease occurs worldwide, with the highest incidence of disease found in the ‘meningitis belt’ of sub-Saharan Africa. In this region, major epidemics occur every 5 to 12 years with attack rates reaching 1,000 cases per 100,000 population. Other regions of the world experience lower overall rates of disease and occasional outbreaks. Annual attack rates in these regions averages around 0.3 to 3 per 100,000 population.

In the meningitis belt, serogroup A historically accounted for 90% of meningococcal disease cases and the majority of large-scale epidemics. Starting in 2010, meningitis belt countries began implementing mass vaccination campaigns for a monovalent serogroup A meningococcal conjugate vaccine (MenAfriVac®). Held in 22 of the 26 target countries as of December 2018, these campaigns vaccinated 1 through 29 year olds. In addition, 8 countries introduced the vaccine into the routine childhood immunization program. Following vaccine introduction, epidemics due to serogroup A have been eliminated pdf icon[8 pages]external icon in vaccination areas. Recent epidemics have been primarily due to serogroups C and W. Serogroup X outbreaks have also been previously reported in this region. Risk factors for meningococcal disease outbreaks in Africa are not fully understood. However, the following regional characteristics create favorable conditions for meningococcal disease epidemics:

In Europe, the Americas, and Australia, serogroups B, C, and Y together account for a large majority of cases. However, public health officials have observed increasing numbers of serogroup W in some areas. In temperate regions, the number of cases increases in winter and spring. The annual Hajj pilgrimage has also been associated with outbreaks of meningococcal disease due to serogroups A and W.

CDC leads an international consortium called MenAfriNet in collaboration with

This consortium works to strengthen meningitis surveillance in sub-Saharan Africa. The primary goal is to evaluate the impact of MenAfriVac® on the incidence of meningococcal disease due to serogroup A.  The consortium also monitors the emergence of disease and epidemics due to other serogroups. Learn more about MenAfriNetexternal icon. 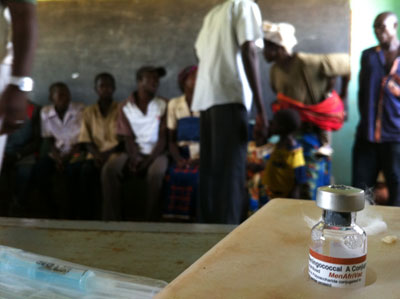 Photo of the MenAfriVac™ vaccine in Burkina Faso.

Epidemics of meningococcal meningitis in Africa can affect hundreds of thousands of people and kill many thousands. CDC contributed to development of an inexpensive vaccine. CDC is now working with partners to ensure it is used where needed most and evaluated for effectivene…more 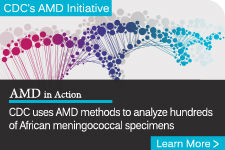