Leptospirosis is a bacterial disease that occurs worldwide and can cause serious illnesses such as kidney or liver failure, meningitis, difficulty breathing, and bleeding. Cases of leptospirosis can increase after hurricanes or floods when people may have to wade through contaminated water or use it for drinking or bathing.

How do people get leptospirosis?

People can get leptospirosis when they have contact with water or soil containing urine or other body fluids from infected animals, if they directly touch the urine from an infected animal or if they consume food or water contaminated by urine. The bacteria can survive for months in urine-contaminated water and soil. A variety of animals can spread leptospirosis, including rodents, dogs, livestock, and wildlife. During a hurricane or heavy rain, animal urine in the soil or on other surfaces can run into floodwater, contaminating it. Streams and other natural water sources can also be contaminated.

What are the symptoms of leptospirosis?

Leptospirosis most often affects people who work outdoors or with animals, or those who take part in recreational activities involving water or soil, like swimming, boating, and gardening. After floods or heavy rains, anyone who has been in contact with floodwater, contaminated freshwater (rivers and streams) or soil could be at risk for infection.

Some activities that increase your risk of leptospirosis include

Print: Protect Yourself from Leptospirosis 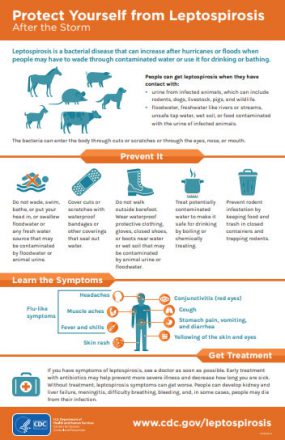 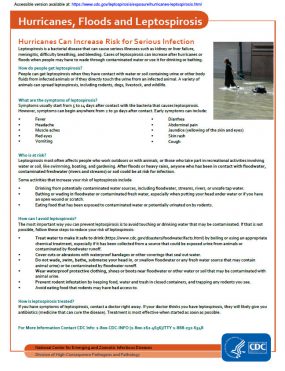 How can I avoid leptospirosis?

The most important way you can prevent leptospirosis is to avoid touching or drinking water that may be contaminated. If that is not possible, follow these steps to reduce your risk of leptospirosis:

How is leptospirosis treated?

If you have symptoms of leptospirosis, contact a doctor right away. If your doctor thinks you have leptospirosis, they will likely give you antibiotics. Treatment is most effective when started as soon as possible.

What if my doctor has questions?

If your doctor has questions about leptospirosis, they should visit the CDC web page for healthcare workers.