Elaborate desserts with eye-catching decorations and designs are more popular than ever and have become staples at parties and events. These desserts may be beautiful, but they can also be risky, as Rhode Island public health officials learned during a recent outbreak investigation. In 2018, the Rhode Island Department of Health epidemiology, laboratory, and environmental health teams worked collaboratively to tackle an unusual outbreak involving a glittery birthday cake and to prevent others from getting sick throughout the state.

An Outbreak at a Birthday Party 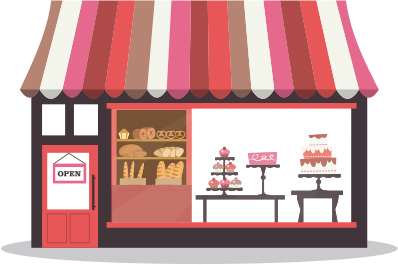 Rhode Island’s Center for Acute Infectious Disease Epidemiology received a call that six people had become ill with vomiting and/or diarrhea after attending a one-year-old’s birthday party. Investigators worked quickly to interview the sick people and learned that most had experienced vomiting and began feeling ill shortly after eating birthday cake. The cake was described as having a “metallic, glittery, and rose gold colored” frosting. Luckily for investigators, the family which hosted the birthday party had leftover cake in the fridge, and the Rhode Island Center for Food Protection (CFP) was able to collect a slice of cake for the Rhode Island State Health Laboratory (RISHL) to test.

Having identified the cake as the likely cause of the illnesses, CFP environmental health investigators continued their investigation by visiting the local bakery that made the birthday cake. Investigators interviewed the bakery manager, observed the kitchen areas, and charted a “food flow” of the cake making process. While nothing stood out to investigators about the cake-making process, they wanted to know more about a product called “luster dust” that had been added to the frosting in order to create the metallic, glittery, rose gold color that party-goers had described to interviewers. This left the investigators asking – what exactly is luster dust?

A food flow is a method in which each step in the food making process, such as how it is stored, prepped, cooked, and served, is analyzed in order to identify any potential hazards or poor practices that could have contaminated a food item.

What is Luster Dust?

Luster dust is a popular decorative product that is typically used to add glitter or color to a dessert. Investigators discovered that the luster dust used to decorate this cake had no ingredients listed on the bottle. The bottle was also labeled as “non-edible, non-toxic, and for decoration only”. Since the bottle said “non-toxic”, the local bakery assumed that it was safe to use on the frosting of the cake. While some glitters and dusts are edible, some luster dusts are not safe to eat and should only be used on objects decorating the dessert, such as candles or decorative fondants.

To be safe, any unlabeled luster dust bottles, as well as any desserts that had been decorated with luster dust, such as chocolate pops and chocolate covered pretzels, were removed from the bakery. Investigators then began a traceback investigation of the luster dust, starting with the popular arts and crafts website from which the luster dust had been purchased. The website also did not list ingredients, but investigators were able to determine the product’s origin and contacted the original seller. Investigators were shocked to learn that the luster dust used on the birthday cake not only contained copper, a non-edible and toxic ingredient, but was originally used for industrial coatings –a type of paint used to protect materials such as concrete, steel, and floor coverings from rusting.

Laboratory results from the RISHL confirmed the traceback investigation findings: the frosting from the slice of cake contained nearly 900 milligrams of copper, a dose consistent with the heavy metal poisoning symptoms, such as vomiting and diarrhea, that the sick people described to interviewers. Thus, the cake frosting containing luster dust was confirmed as the food item that made the party attendees sick.

After this discovery, CFP visited other bakeries throughout the state to prevent other similar outbreaks. They found that one-third of bakeries were using inedible, potentially toxic luster dust on an edible part of food, not just on objects decorating desserts. The Department of Health issued guidelines stating that inedible luster dust products should only be used on non-edible decorations and educated bakeries on the proper use of luster dust. In addition to these guidelines, investigators learned how to distinguish between edible and non-edible glitters to ensure that bakeries were using them properly in the future.

Thanks to the quick collaboration, coordination, and clear communication across Rhode Island’s epidemiology, environmental health, and laboratory teams, investigators were able to quickly solve this outbreak and prevent additional illnesses from occurring. Building capacity to work collaboratively across epidemiology, laboratory, and environmental health is an important aspect of the OutbreakNet Enhanced program and was critical in quickly solving this outbreak. Since the use of glitters and dusts will continue to be popular decorative products for desserts, quick responses and prevention measures like those implemented by Rhode Island will help to ensure that luster dust and other decorative materials are being used safely and properly.

Go Check It Out:
To view FDA’s advice on decorative glitters, click on the link below.