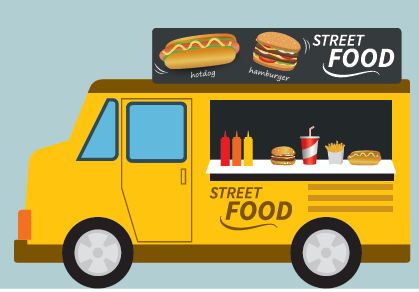 The growing popularity of food trucks and pop-up eateries in recent years has raised new questions and challenges to public health. How do public health professionals effectively respond to and control outbreaks associated with highly mobile or even partially mobile establishments?

In April 2017, the Massachusetts Department of Public Health (MDPH) was notified of more than a dozen people in the Greater Boston area who were sick with the same strain of E. coli O157. The Boston Public Health Commission initially detected the increase in cases among college-aged students and notified MDPH.

As additional reports came in, MDPH and local boards of health (LBOHs) quickly interviewed the ill people to identify common exposures.  A centralized review of the interviews revealed that several people had eaten at a popular restaurant chain in Greater Boston.

On further investigation, local public health officials learned that the suspect restaurant chain operated numerous food trucks and pop-up eateries supplied by a local commissary, in addition to traditional brick-and-mortar establishments. MDPH quickly realized that the partially mobile structure of the retail food operation would complicate the investigation, making it difficult to pinpoint the source and extent of the outbreak.

Since the ill individuals resided in a number of local health jurisdictions, those LBOHs collaborated with MDPH and each other in the investigation. MDPH also communicated preliminary findings about the outbreak to the LBOHs in towns where the food trucks and pop-up eateries might have operated to prepare them for possible additional cases.  To prevent further exposures, all restaurant operations were closed and food workers were excluded from work pending a negative stool test for E. coli O157.

Together, MDPH and local inspectional services departments (LISDs) conducted environmental assessments in the restaurant’s various fixed locations, mobile establishments, and central commissary, collecting a large number of food samples for testing. MDPH provided stool specimen kits with instructions to local health officials who worked with each of the chain’s locations to collect food worker specimens.  All samples were tested at the Massachusetts State Public Health Laboratory (MA SPHL), and all food and clinical samples were negative for E. coli O157. Although investigators did not identify a specific source of E. coli O157 in the restaurant and its satellites, prompt public health action helped to control the spread of the outbreak in less than a week. No additional cases were identified with exposure dates after the date restaurant operations were closed and food workers were excluded.

One of the successes of this investigation was the overall commitment and cooperation among key partners. Public health officials at MDPH met often to discuss the ongoing investigation and to coordinate communication efforts with local health partners. LBOHs and LISDs were highly responsive and actively engaged throughout the investigation.

The MA SPHL was also able to distinguish this local outbreak from a concurrent national outbreak associated with soynut butter by combining additional laboratory subtyping data with the information that had been obtained through food histories from ill individuals.

The increasing popularity of food trucks and pop-up eateries is just one way the food industry is changing the way people consume food, and consequently presenting a challenge to the way public health oversees these operations. Responding to an outbreak associated with a partially mobile food establishment posed new challenges that were met with effective collaboration with local partners enabling Massachusetts to quickly respond and control the outbreak, preventing more people from becoming ill.