The Infant Feeding Practices Study II (IFPS II) was a longitudinal survey about infant feeding and care. Data were collected approximately monthly beginning in the third trimester of pregnancy and through the infant’s first year.

The Participants: Women and Their Children During the First Year of Life 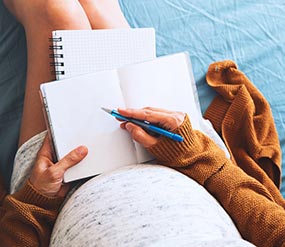 Between May and December 2005, approximately 4,000 pregnant women from across the nation were recruited to participate in the Infant Feeding Practices Study II (IFPS II). To maximize participation rates, the study selected the sample from a national consumer opinion panel consisting of 500,000 households from throughout the United States.

To qualify for the IFPS II, the mother had to be at least 18 years old and the infant had to be a singleton born at ≥35 weeks gestation, weighing at least 5 lbs, and without medical conditions that would affect feeding. About 2,000 mother-infant dyads qualified and completed mail surveys of IFPS II.

With the exception of a brief telephone interview near the time of the infant’s birth, all IFPS II data were collected using mailed questionnaires.

The IFPS II provides detailed information about the following:

Study methods are described in this publication:

The Year Six Follow-Up Study (Y6FU) of the mothers and children who participated in the IFPS II was a cross-sectional study conducted to characterize the health, development, and dietary patterns of the children at 6 years of age.

The Participants: Women and Their Children at Six Years of Age

Between March and June of 2012, when children from IFPS II were 6 years of age, mothers were re-contacted to participate in a cross-sectional mail survey for a follow-up. To qualify for Y6FU, the mother had to have answered at least the prenatal and neonatal IFPS II questionnaires and not have been disqualified afterwards due to some medical reasons that affected infant feeding. Of 2,958 mothers who qualified for Y6FU using the IFPS II, 1,542 women participated in the follow-up study yielding a response rate of 52 percent.

For Y6FU, two methods were used to collect the data to maximize the response rate. Mothers were first sent a questionnaire through the mail; however, those who did not respond after two attempts of mailed questionnaires were contacted by telephone to obtain the same information by telephone interview.

The Y6FU provides detailed information about the following:

Study methods are described in this publication: