Mothers With Confirmed or Suspected Ebola Virus Disease (EVD) Should Not Breastfeed Their Infants. 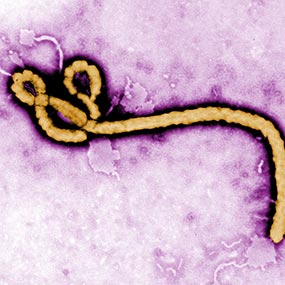 Ebola Virus Disease, also known as Ebola virus or EVD, is a rare and deadly disease caused by an infection with a group of viruses within the genus Ebolavirus. Ebola virus is spread through direct contact with blood and other bodily fluids including urine, saliva, sweat, feces, vomit, breast milk, and semen, of a person who is sick with or has died from EVD.

Is it safe for mothers with Ebola virus to breastfeed their infants?

No. Ebola virus has been detected in samples of breast milk, but no data exist about when in the course of the disease the virus appears in breast milk or when it is cleared. Therefore, women with confirmed EVD and women who recently recovered from EVD should not breastfeed.

Learn more about the breastfeeding recommendations, safe handling of breast milk, and care of a newborn, also known as neonate, born to a mother who may have EVD, or has been exposed to EVD.

Is it safe for mothers who become pregnant after recovering from Ebola virus to breastfeed?

Yes. There is no known risk of transmission of Ebola virus via breastfeeding for infants born to women who become pregnant after recovering from EVD. Breastfeeding is safe and should be recommended for these women. Learn more about guidance for screening and caring for pregnant women with Ebola Virus Disease.

How should breast milk be safely handled in health care settings?

Standard precautions for preventing the transmission of bloodborne pathogens do not apply to human breast milk in most circumstances. However, there are no data about the risks from exposure to breast milk containing Ebola virus in health care settings. Thus, when a mother has confirmed Ebola virus, personal protective equipment guidance should be followed by anyone handling her breast milk. The expressed milk of a mother with confirmed Ebola virus is considered Category A infectious waste and must be disposed of in accordance with CDC guidance on waste management. If a mother is using a breast pump to express her milk, she should be provided with single-use disposable pump part kits.