Promoting the Health and Well-being of Caregivers for Older Adults

REACH OUT:  Moving Programs into Practice 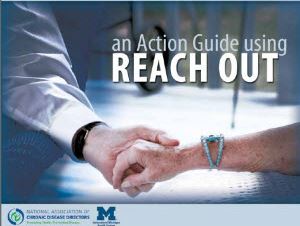 Implementing a Community-based Program for Dementia Caregivers: An Action Guide Using REACH OUT, provides a step-by-step approach to using REACH OUT in communities of varying size and composition. REACH OUT is an evidence-based caregiver support system designed to promote the health and well-being of adults caring for persons with dementia. The Action Guide provides relevant examples, tips, resources, Web sites and additional references to bolster your understanding of the intervention and its translation in a community setting. Much of what appears in the Action Guide can be applied to other evidence-based programs and is intended to facilitate expansion of caregiver interventions and promote their adoption into widespread practice. The Action Guide was developed in collaboration with the University of Michigan’s Institute of Gerontology, the Centers for Disease Control and Prevention, and the National Association of Chronic Disease Directors.

The prevalence of caregivers in the AI/AN population is greater than that the general U.S. population (McGuire, 2008). Like many people of all racial/ethnic groups AI/AN families want to care for their elders and the elders want to remain in their homes and have family care for them as long as possible

One concern for AI/AN communities is that there is an out-migration from the reservations to urban areas for jobs leaving a potentially smaller pool of prospective caregivers. Garrett and colleagues developed the Caregiver Ratio Index (CRI), which is an algorithm that defines how many potential caregivers exist for every frail elder by tribe. The higher the CRI the higher the number of potential caregivers there are to each frail elder.

For the American Indian/Alaskan Native (AI/AN) population, taking care of an elder is a continuation of an ancient custom of extended family and lifelong care for family. Indian family caregivers are similar to non-Indian caregivers in many ways; however, the resources available to them are much more limited than for non-Indian caregivers. In addition, eligibility criteria for long-term care services are often couched in language that is not culturally sensitive. Surveys show AI/AN families would like training on how to take care of an older adult, help to coordinate care and navigate the health system, respite care and adult day care to give the caregiver a break, support groups, and more services for their care recipient. This Critical Issue Brief, Caregiving in Indian Country: Tribes Supporting Family Traditions [PDF – 299 KB], looks at caregiving issues in Indian country and the support systems that can maintain this traditional family value.